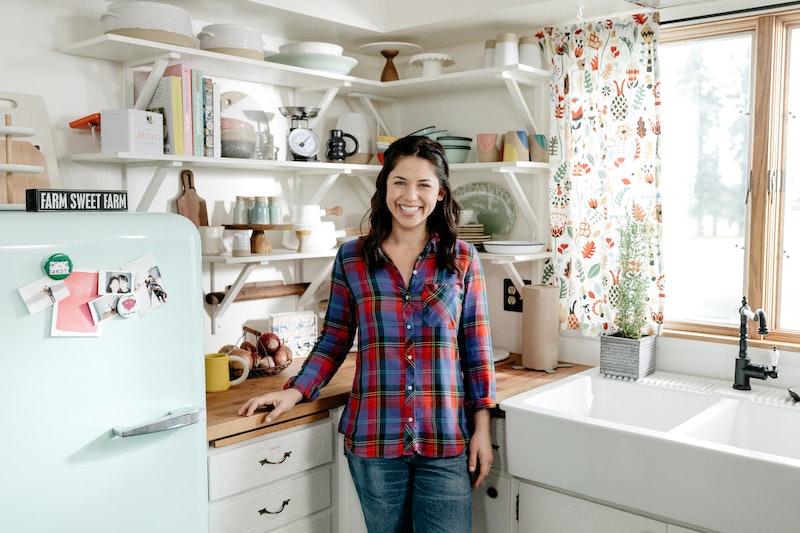 If you ask her what her favorite Thanksgiving food was growing up, blogger and author Molly Yeh will tell you, almost without hesitation, “Macaroni and cheese.”

"It was usually the only dish I would eat on Thanksgiving because I was so picky,” the star of Food Network’s Girl Meets Farm tells Bustle over the phone. “These days I love everything, but growing up, mac and cheese was what I would fill up on every Thanksgiving.”

It’s a surprising and yet 100 percent on-brand comment from Yeh, 30, who made her mark on the food world when she began writing her award-winning blog, my name is yeh, lack of capitalization intended. She started the blog when she moved from Brooklyn, New York, to her then-fiancé’s sugar beet farm on the North Dakota-Minnesota border, in 2009. In her posts, as well as in her first cookbook, Molly on the Range, she details the culinary traditions she inherited from her Chinese and Jewish parents, and how she blends these traditions with those of her now-husband’s Norwegian family. But in reading through Yeh’s wide-ranging oeuvre, the prevailing sentiment is an exuberant nostalgia for the foods of her childhood, no matter their cultural provenance — hence, the mac and cheese.

The holidays, for most of us, is when this specific brand of nostalgia makes itself most known; there’s even an area in our brains that lights up when exposed to nostalgic holiday traditions. But when you grow up in a multicultural household, “the holidays” aren’t just the month between Thanksgiving and New Year’s. “Being Chinese and Jewish and living in America, there are so many holidays to celebrate, but hands down my favorite part of the holidays is the food,” Yeh says. “I feel like Chinese cuisine and Jewish cuisine both have really good carbs” — she points to matzo balls, challah, dumplings, and noodles as a few standouts — “so there was no shortage of really filling comforting food at all of our holidays.”

Yeh’s parents divorced when she was eight years old, so she says she would spend Thanksgiving with her mom’s family in Florida. “This continues to be my favorite part of Thanksgiving. It was always just everybody was in the kitchen cooking all together and the whole day it was just one big cooking party. It wasn't one person makes the meal and then we sit down at a formal dinner time” — the opposite, Yeh says, of what her husband Nick’s family does, where everyone sits down to a prepared meal at a set time and “it doesn’t go late.”

Across the entirety of the holiday season, however, Yeh says she’s more than happy to take a back seat. “Honestly, I think that my favorite holiday meal right now is the Chinese takeout that we get on Christmas, or the bagels that we have on Christmas day,” she says. “That is the epitome of a relaxed holiday meal.” Her husband’s family, though they’re not Jewish, separately picked up this tradition, she says. “It might not necessarily be on Christmas Eve, but whenever he has his extended family's Christmas celebration, they always do Chinese takeout.”

This isn’t the only way her families’ traditions have blended, intentionally or not. Another oft-cited meal across Yeh’s blog, cookbooks, and show is the hotdish, a midwestern casserole that typically involves a starchy topping, but whose ingredients are otherwise left up to each chef’s imagination. “The last few years, I've been making Thanksgiving leftover hotdish,” Yeh says, which is a casserole of wild rice, leftover turkey and vegetables, and béchamel sauce, with stuffing on top. She and her husband also host Chrismukkah parties for their friends, where last year the theme was “casserole Christmas, hotdish Hanukkah.” (She made a latke and brisket hotdish for the occasion.)

These traditions aren’t just tasty and creative ways to make use of a zillion leftovers, though; they’re an example of the diverse ways multicultural families work to honor all the traditions passed down from their various customs, synthesized into one, long, delicious holiday season. Part of what makes Yeh’s voice so distinctive, apart from its constant, unabashed enthusiasm, is how she speaks about her cultures; not as though they are different from each other, but how they have merged seamlessly, or seemingly effortlessly, through her cooking. It is only natural, obviously, to make a latke-brisket hot dish as a centerpiece of a Chrismukkah party; it reflects a world where tradition-persevering gives way to tradition-making, allowing cultural practices to take on new resonance and meaning as they grow.

Yeh’s tradition-making recently took on new meaning; on Nov. 10, she announced in an Instagram post that, this time next year, she would be a parent. “I was actually just writing a blog post for Hanukkah this year, and it occurred to me that next year Hanukkah I'm going to have a child,” she tells Bustle. “And I just thought lighting the candles with my future child, it made me so happy. As soon as it's old enough to eat solid food, we're going to be doing gingerbread houses and latkes and all of the holiday foods. I really want my child to make lefse with Nick's older family members, who taught me how to make lefse, and to make latkes with my mom. Maybe make pot stickers with my dad and just have that context of where all this food comes from. [I want them to] be able to carry on these traditions to their kids.” Because where else can you create nostalgia — for mac and cheese, matzo, dumplings, or all of the above — except in childhood?