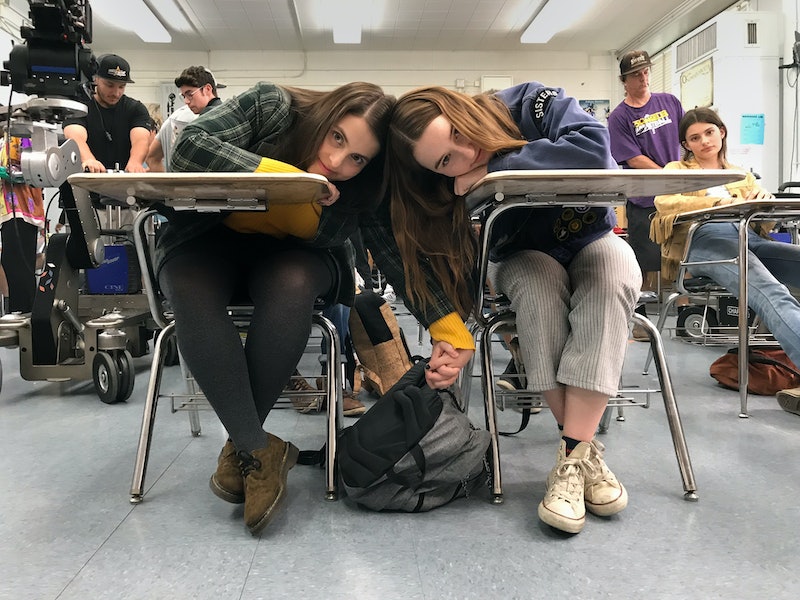 Talking to Booksmart screenwriter/producer Katie Silberman (Set It Up) about high school is like taking a trip back through time. Revisiting the drama, the hardships, and the anxiety of surviving adolescence might not be something everyone wants to do. But Booksmart, opening May 24, goes beyond all of that while telling the story of two super smart best friends looking to party on their last night of high school. The film expertly captures the day-to-day angst (and joy) of being a teenager, but also rings truer in terms of character, friendship, and feeling than a lot of more generic high school movies. Watching Booksmart may make you truly feel like you're seeing your own younger self onscreen, and Silberman and first-time director Olivia Wilde dug deep to recreate the intense feelings of high school.

"Olivia's mantra to all of us was that high school is war," Silberman says when we speak over the phone early in May. "It's that intense when you're in it. It's easy for adults to look back on it, or look at kids in high school, in a kind of condescending way. 'Isn't it cute how obsessed they get or how passionate they get about things?' But when you're in it it's as intense as anything else you'll go through." Wilde's original pitch for the film, the writer says, was Training Day for high school girls. "Give that kind of weight and intensity that you give action movies to women in high school and you've got it."

Booksmart stars Beanie Feldstein and Kaitlyn Dever as Molly and Amy, two besties who totally nailed their academics in school but missed out on all of the partying. When Molly learns that all of the hard-partiers also got into good colleges, she ropes Amy into heading to the biggest party of the year to make up for lost time. The supporting cast features a hilariously new age student played by Billie Lourd, Lisa Kudrow and Wille Forte as Amy's progressive parents, and Jessica Williams as a teacher who just wants to hang with her students (and vice versa.) Wilde's movie is a gorgeously shot, gut-bustingly hilarious first feature that brilliantly captures close female friendships.

Silberman's involvement in Booksmart was 10 years in the making. The first iteration of the script surfaced in 2009, written by Emily Halpern and Sarah Haskins (both now producers for shows such as black-ish, Trophy Wife, and Good Girls). A few years later, in 2014, Susanna Fogel (screenwriter for The Spy Who Dumped Me) took another stab at Halpern and Haskins' idea. Silberman came on to finalize the script in 2017, when Wilde was already signed on to direct, and put her own personal touches on the previously established story of two smart best friends.

"This was a really personal story," Silberman says, "because I was very type A, I was very into my school work, and I thought prioritizing school work was the right decision, long-term. It wasn't until later that I learned everyone who had fun was just as smart, if not smarter than me."

Rather than just make Amy and Molly the "smart girls," or Lourd's character, Gigi, the "weird girl," Silberman wanted to emphasize that women contain multitudinous qualities. "So many of my best friends throughout high school, and later in life, are beautiful and fun and irresponsible and cool but also very, very smart, and they don't get credit for that," she says. "The girls that, in movies, would be considered the fun, flighty person, are now doctors or have started their own business."

Silberman tapped into her own high school experiences and spoke with members of Gen Z to fine tune Booksmart's atmosphere. "It's easier than you would imagine to get back into the mindset of who your friends were and what the social dynamics were. I think that experience in a lot of ways is timeless," Silberman says. "No matter when you're in high school so many of your passions and issues and things that you find exciting are the same."

But while it is a raucous party movie, Booksmart's extra edge is how well it reflects the depth of female friendship, especially at Molly and Amy's age. "For so many young women, your best friend in high school is like your first soul mate. It's rare at any point in the rest of your life to see your best friend for eight hours a day, then to talk all night on the phone," Silberman says. "So we were really trying to demonstrate the true intimacy, the tangled limbs of having a drawer at someone else's house. How well you know their parents... at no other point in your life are your friends parents such a huge presence in your world."

Working with Wilde only added to the experience of making a movie that represents teens so truthfully. "It's truly extraordinary that it's not her 120th movie," Silberman says of the director. "It was really special to be on set with her because she made everyone the best version of themselves. She knew the tone and the vibe immediately."

The result is a movie that is simultaneously hilarious and heartbreaking, filled with angst but also nostalgia. It revives the butterflies-in-your-stomach feeling of excitement and dread that comes with growing up and moving on. Silberman says that one of her own friends told her, "I don't think I'll be as elated or as devastated as I was in high school." Which is not to say that bad or great things haven't happened to them since, "but there's something about the levels of emotion that you get to, and the frustrations of adults thinking it's cute," Silberman explains. "'No, this isn't cute, I'm on a battlefield out here, I'm fighting for my life.'"

Looking back, we may not have always given ourselves enough credit for getting through the combat zone that is adolescence. But then a movie like Booksmart comes along to remind us that we were actually heroes, no matter what group we belonged to.

More like this
How To Stream 'Bros'
By Morgan Leigh Davies
13 Photos Of The 'Blonde' Cast Vs. Marilyn Monroe & Other IRL Counterparts
By Marina Watts
The 50 Most Powerful Characters In The Marvel Universe, Ranked
By Johnny Brayson and Nola Pfau
20 Photos Of The 'Hocus Pocus' Cast Then & Now
By Radhika Menon
Get Even More From Bustle — Sign Up For The Newsletter