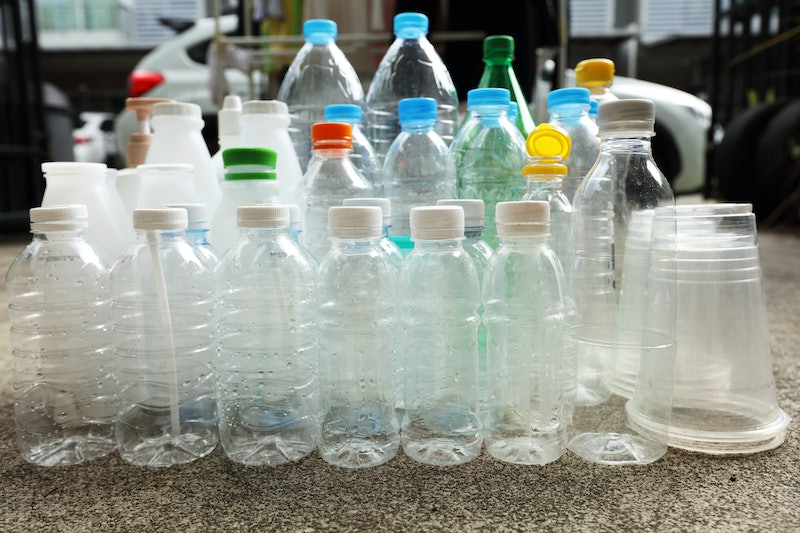 We already know that single-use plastics can be harmful to the Earth. But did you know that both single-use and reusable plastics could potentially be harmful to you too? Lots of everyday items like plastic containers and plastic drinking bottles contain a chemical called bisphenol A., or BPA, and how it actually impacts you is up for debate. So before you continue using all those plastic products, you might want to consider how BPA affects your health and then decide if you want to find an alternative.

BPA is used to harden plastics, line cans of food, and make some medical equipment items, according to the independent National Capital Poison Center. And though BPA has been around for more than 120 years, it wasn't until the past two decades that serious concerns were brought up about its possible effects on the human body, the Environmental Working Group, a non-profit that promotes human and environmental health, reported.

Still, since so much of the research is relatively recent, there's debate over the findings. Some research, for instance, has concluded that even low doses of BPA could be connected to endocrine disorders or severe fertility issues, according to a study conducted by the Medical University of Gdansk in Poland in 2015. Other similar research has suggested that BPA can possibly cause problems in the brain and prostate gland of fetuses, the Mayo Clinic reports.

On the other hand, government studies on rats have implied that even at high doses, BPA only leads to "minimal" health effects, and the U.S. Food and Drug Administration (FDA) has declared the chemical safe in low-doses. Even so, the FDA has recently expressed "some concern" over the "potential effects of BPA on the brain, behavior, and prostate gland in fetuses, infants, and young children." Similarly, the Environmental Protection Agency explained that BPA "is a reproductive, developmental and systemic toxicant in animal studies and is weakly estrogenic." The FDA has promised to continue working with the National Toxicology Program to conduct studies.

If you feel like there are some inconsistencies here, you're not wrong. The bottom line is that the impact of BPA exposure requires more research. In the meantime, if you're concerned about your exposure to BPA and the possible effects it may be having on your health, you can always take small everyday actions to reduce your contact with the chemical.

"If plastic containers must be used, avoid exposing the containers to extreme temperatures, microwaves, dishwashers and other friction, acidic foods such as tomatoes and citrus fruits, and discard them when clear plastic becomes cloudy or stained," Hoepner adds. She also recommends steering clear of paper receipts, which can also contain BPA. And at the same time, keep an eye out for possible updates from the FDA and other independent studies — you never know how they'll tip the scale.