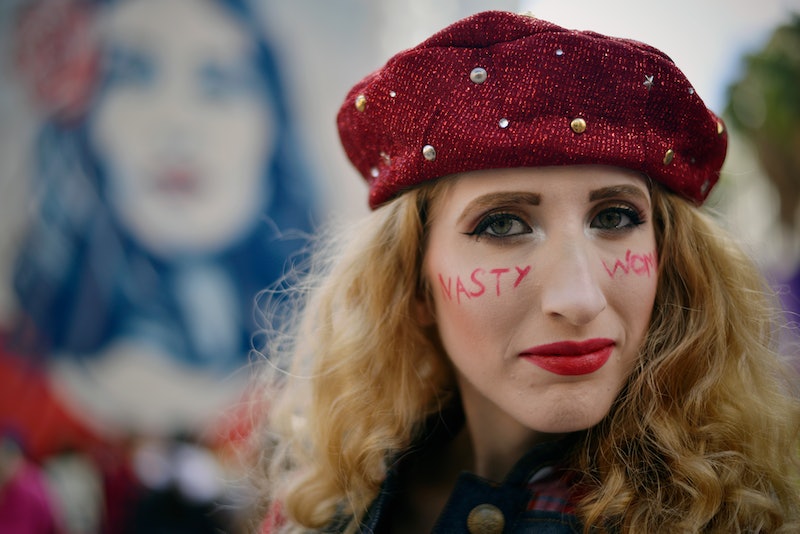 During the 2016 election, Donald Trump repeatedly vowed to appoint Supreme Court justices who would overturn Roe v. Wade and thereby rescind a woman's constitutional right to an abortion. So when he announced Brett Kavanaugh as his nominee Monday night, reproductive rights advocates were quick to point out that the federal judge will likely fulfill Trump's campaign promise. No matter where you live, Kavanaugh's Supreme Court confirmation could affect your reproductive rights in major ways.

“If Justice Kavanaugh is put on this court, it will mean that five men will be in power to overturn Roe v. Wade and take health care decisions away from women,” Sen. Patty Murray (D-WA) tells Bustle. Murray and reproductive rights advocates agree that Kavanaugh represents an imminent threat to women's control over their own bodies.

If the Senate confirms Kavanaugh to join the Supreme Court bench, he will help make up a majority of conservative justices who have signaled that they may be willing to overturn the 1973 precedent that made abortion legal nationwide. The absence of Roe v. Wade would effectively place abortion rights back in the hands of individual states, nearly half of which would be at risk of losing access to abortion altogether.

“What’s at stake is every woman and man in this country will realize that health care options won’t be available to them,” Murray says. “In extreme circumstances, they won’t be able to make choices about themselves; these five men will have already made it for them.”

Reproductive rights advocates don't believe it's Trump's campaign promises alone that put abortion rights in danger. Emma Dulaney, a spokesperson for the Planned Parenthood Federation of America, tells Bustle that Kavanaugh's previous rulings also say a lot about how he regards a woman's right to choose.

Dismantling Roe v. Wade and allowing states to determine the legality of abortion within their own borders would likely leave women in half of the country without an abortion clinic in their state, according to The Center for Reproductive Rights' estimation. That would inevitably force anyone seeking to end a pregnancy to travel to a nearby state where abortion is legal, which would require more time off work and more money to pay for transportation and housing — time and money many women don't have.

"This appointment will affect the lives of hundreds of millions of women in the U.S for a very long time," says Lourdes Rivera, senior vice president of U.S. programs at the Center for Reproductive Rights. “The burden would fall most heavily on young and low-income women and women of color. Judge Kavanaugh is 53 years old. We’re talking about shifting the balance of the Court for generations.”

Kavanaugh's confirmation could limit access to birth control, too. He asserted in a 2015 dissent that religious organizations shouldn't have to provide health insurance to their employees that covered contraception. He also mentioned that Obamacare required employers' health insurance to cover types of birth control that "some believe operate as abortifacients and result in the destruction of embryos."

The Trump administration has since rolled back the birth control mandate, but Kavanaugh's argument suggests that he would vote in favor of religious liberties over access to birth control if a relevant case made it to the high Court. This could mean a number of things depending on which case the Supreme Court decided to hear, including limiting access to Plan B and IUDs, which some religious groups believe are equivalent to abortion.

With so much at stake for women's access to health care, the fight against Kavanaugh’s confirmation is already in full swing. Ilyse Hogue, the president of NARAL Pro-Choice America, said in a press call that activists were mobilizing long before Trump named his nominee this week. "We will have a steady drumbeat of activity through the hearings and into what we have called for a 50-state mass mobilization day of action on August 26, which is Women's Equality Day," she said.

Murray also urges people who want to protect access to abortion to contact their senators any way they can: call, text, write, or show up at their office. She believes a national movement opposing Kavanaugh’s confirmation could convince a few Republican senators to vote against the president's nominee — just like a national outcry last year stopped Congress from repealing the Affordable Care Act.

"That’s what has to happen now," Murray says. "So this will depend on people in this country — if they’re willing to stand up and make their positions known and say, ‘Not now, not ever. We need a Supreme Court that will assure that women have the right to make their own decisions about their own health care.’"