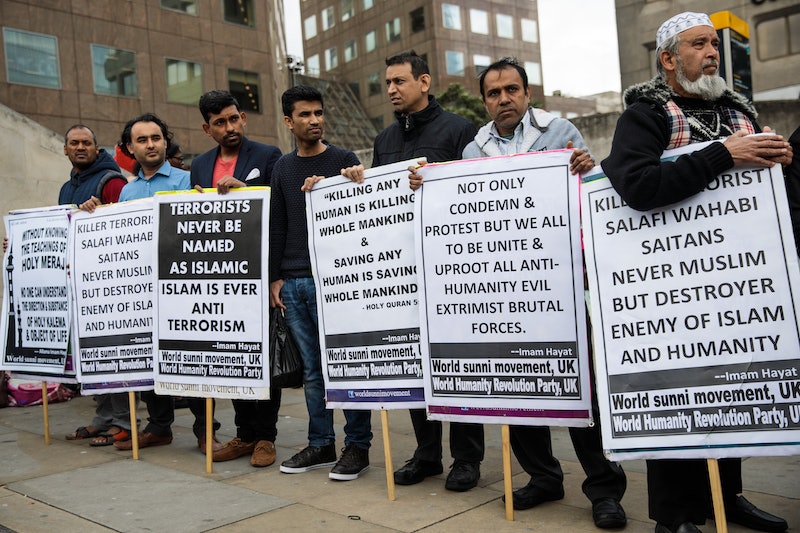 In an open letter published Monday, more than 130 British imams refused to bury the terrorists who attacked London and Manchester in an act of protest against the recent violence in the United Kingdom. The group's powerful statement condemned their actions "in the strongest terms possible" and made clear that there was no "religious legitimacy" for the attacks — both of which ISIS has claimed responsibility for.

“We, as Muslim Imams and religious leaders, condemn the recent terror attacks in Manchester and London in the strongest terms possible," the statement, organized through the Muslim Council of Britain, read. "We are deeply hurt that a spate of terror attacks have been committed in our country once more by murderers who seek to gain religious legitimacy for their actions. We seek to clarify that their reprehensible actions have neither legitimacy nor our sympathy."

In Muslim tradition, bodies are supposed to be buried as soon as possible, typically no more than 24 hours after death. This rule can be suspended if the person did not die of natural causes, such as when an autopsy is needed or a soldier dies on the battlefield. But the imams argued in their letter that these violent criminals are not deserving of any ritual connected to Islam.

"We will not perform the traditional Islamic funeral prayer for the perpetrators and we also urge fellow imams and religious authorities to withdraw such a privilege. This is because such indefensible actions are completely at odds with the lofty teachings of Islam," the group wrote in its statement.

This statement directly negates some of the most frequent criticisms against Muslims in the wake of Islamic-related terrorist attacks — that Muslims do not speak out against extremist violence and that the perpetrators share their beliefs. Defying the prejudiced and outdated beliefs that many Westerners hold about Islam, the imams' letter reiterates that Islam has no core ideology in common with any of the recent attackers' own, rejecting the violence and hatred that their attacks stood for. As with any ideological community, individuals at the fringes can corrupt the message that the majority of the group endorses.

These imams are took a stand against that corruption of their peaceful beliefs, and hopefully it will continue to turn the tide of Islamophobia throughout the world. The more allies stand with the legitimate Islamic community, the more focus can be put onto rooting out the real causes of violent extremism.