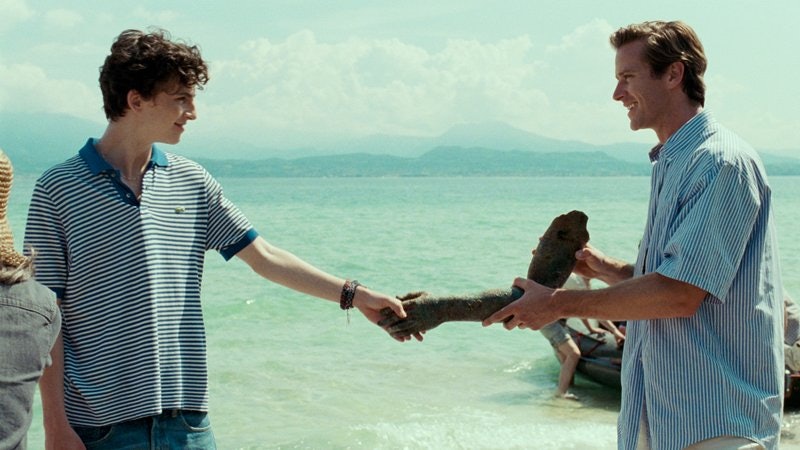 Intoxicating love and lust are at the heart of Call Me By Your Name. The new movie, based on André Aciman’s 2007 novel of the same name, is a beautiful and heartbreaking romance set during the summer of 1983, when precocious 17-year-old Elio (Timothée Chalamet) and visiting PhD student Oliver (Armie Hammer) fall for each other. The film captures the slow burn of a crush, followed by the all-consuming urgency of a union with an expiration date. There is another intimate relationship within the overall narrative, though, that between Elio and a teenage girl, Marzia (Esther Garrel), he dates while pursuing Oliver. The way Call Me By Your Name portrays Elio's romances is striking, both because it doesn't reduce Marzia to a well-worn "beard" stereotype and because it shows just how fluid sexual desire can be, especially for teenagers coming of age.

In a summer of discovery, Elio explores his sexuality and desires for the first real time, leading him towards both new and familiar figures in his life. Marzia is a childhood friend, and while Elio secretly craves Oliver, he publicly pursues her instead. This relationship could've been portrayed as a courtship of convenience or a way of disguising Elio’s true feelings, but instead, director Luca Guadagnino gives a nuanced insight into sexual fluidity and how desire can take different forms. This includes being drawn to two different people at once, in entirely different ways, and Call Me By Your Name dispels the stereotype that a character like Marzia must be a "beard." Elio is sexually attracted to his friend, but lacks the hungry ache he feels for Oliver.

Call Me By Your Name is set in idyllic northern Italy, and Elio's home has an open door policy; all summer long, there's swimming, sunbathing and dinners that last for hours, with family, friends, and guests all welcome. In the movie's opening scene, Elio hangs out with Marzia in the bedroom that will soon become Oliver’s, and she is shown to be a regular fixture at the Perlman’s sumptuous 17th-century villa. Marzia is the girl Elio has known forever, while Oliver is the charming new guy who quickly takes up space in Elio’s home, head and heart.

Marzia is equal parts starry-eyed and cautious when it comes to Elio. And she has a reason to be wary, as although Elio’s affection towards her is sincere, his actions are influenced by feelings for another. After seeing Oliver get hot and heavy on the dance floor with local girl Chiara, Elio partakes in a night swim with Marzia. Stripping down to their underwear brings out her shyness, despite hours spent in the near undress of a flimsy summer wardrobe. It's a rather chaste encounter, just the duo dipping a toe into intimate waters of sexual exploration. But in the morning, Elio brags to his father and Oliver that they almost had sex.

At first this level of bravado seems out of character for Elio, and yet it is in tune with how clumsy he is in dealing with previously uncharted territory (later, when he does sleep with Marzia, he doesn't resort to bragging afterwards). The teen is well studied in the arts, but a novice when it comes to matters of the heart, with both men and women. Elio pursues Marzia as way to work through his frustrations as a result of genuine attraction towards both her and Oliver, and not as weapon to make Oliver jealous. If he was using her simply to induce envy, he would flaunt every encounter in Oliver's face, but because he actually cares about them both, he doesn't do this.

And he isn’t doing it to kid himself straight either. Marzia is neither jealousy pawn nor "beard." She plays a large role in the story, and Indiewire reports that when discussing a potential Call Me By Your Name sequel, Guadagnino noted that Marzia could factor into the tale. However, no matter how genuine Elio's feelings are toward her, it is far from his all-consuming Oliver obsession. It's a love triangle with unequal sides, and reinforces the notion of sexual fluidity within the story.

The pivotal speech by Elio's father (Michael Stuhlberg) near the end of the film includes a line that points to this notion. Addressing Elio's romance with Oliver, the father tells his son, "I may have come close, but I never had what you had. Something always held me or stood in my way." The phrasing is ambiguous, but it's clear that the man, despite his seemingly happy life, has regrets. If Elio followed in his father's footsteps, dating Marzia would be playing it safe; he maybe could have something nice with her, but he would always wonder, "what if?" So he goes towards Oliver, the stronger and bolder romantic connection. Yet as a result of his teenage immaturity, he's carelessly cruel in his eventual dismissal of Marzia in favor of Oliver; she senses that Elio is into Oliver, but instead of taking the opportunity for a kind rejection, Elio hurts Marzia by sleeping with her while clearly desiring Oliver more, and then ignoring her in favor of his new love.

He blames work, but when she asks him, “Am I your girl?”, Elio can’t verbalize the rejection. Instead, he just shrugs his shoulders. It is a cowardly move of a guy who doesn’t want to hurt his friend-turned-lover, and the pain and confusion is etched on her face. But instead of letting this destroy their friendship, Marzia forgives Elio and reinstates their friendship. Their bond is more than just the casual fling, and the film expertly underscores the complex feelings that come with first love and lust. LGBTQ+ experiences can’t be boiled down to one thing, and you can’t always put a label on what the heart wants. And even though Elio tosses Marzia to one side, the film treats her with care, circling back to this relationship and its importance. She is there before and after Oliver; an anchor for Elio, rather than a foil.

Marzia is part of Elio’s story, even if she isn't the story — for Elio, it is Oliver who is desire manifested. Call Me By Your Name is steeped in self-discovery, sexual awakening, experimentation, and indulgence in all forms. And it isn’t surprising that such a portrayal is resonating with so many, and that the movie will be considered nothing short of a coming-of-age masterpiece for years to come.

More like this
Your Guide To Watching 'Everything Everywhere All At Once' In The UK
By El Hunt and Sophie McEvoy
Vanessa Hudgens Is Reportedly Engaged To Cole Tucker
By Jake Viswanath
Pamela Anderson’s Dating & Marriage History Could Be Its Own TV Series
By Jake Viswanath
Keke Palmer Shares The Sex Of Her & Darius Jackson's Baby
By Jake Viswanath
Get Even More From Bustle — Sign Up For The Newsletter
From hair trends to relationship advice, our daily newsletter has everything you need to sound like a person who’s on TikTok, even if you aren’t.