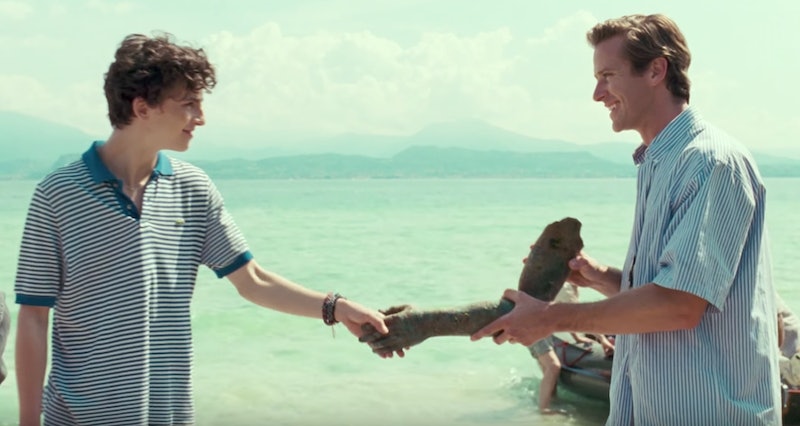 Every once in a while, a new romantic movie is released to remind everyone that their hearts can still skip a beat at a compelling love story. Call Me By Your Name, which comes out on Nov. 24, will have that effect on its audiences. The movie depicts a summer romance shared between two young men when they find themselves living together, and it seems so real that it'd make total sense if Call Me By Your Name is a true story. Yet while the young love depicted by actors Armie Hammer and Timothée Chalamet, seems incredibly realistic, the movie is actually based on a fictional book of the same title.

Despite the movie taking place in 1983, Call Me By Your Name feels like a modern romance, focusing not on discrimination or a coming out experience, but simply on the budding relationship between its main characters. As Hammer told The New York Times, "It’s just a love story, and it’s really humanizing. No one gets beat up, no one gets sick, no one has to pay for being gay."

The unique film takes place in Italy, when a 24-year-old student named Oliver (Hammer) visits a small town to intern with a professor for a summer. The professor's son with whom Oliver stays — 17 year-old Elio (Chalamet) — discovers his feelings for the older guest, and so a love story unfolds. The movie is also a coming-of-age tale, and with Elio being a musical prodigy and Oliver studying Greco-Roman culture, Call Me By Your Name is rich with art and beautiful Italian scenery. And despite the characters' age difference, the two men fall deeply in love with each other, making for a very romantic and sexy film.

The book which the movie is based upon came out in 2007 by André Aciman. Even though the movie is widely labeled as an LGBTQ+ romance, the author prefers not to use the labels being used to describe his work. In an interview with BOMB Magazine last January, Aciman said, "I don’t believe in straight, bi, gay—I don’t believe in any of that. We’re just a mess." Call Me By Your Name. While movies which show the discrimination faced by LGBTQ+ individuals are extremely important, the film is most certainly unique, as the two men's greatest source of turmoil comes from their time-limited affair. And the more movies that show the ranges of experiences faced by LGBTQ+ couples, the better.

Call Me By Your Name not only realistically captures the powerful, dramatic effects that love can have on teenagers and young adults, it also has a lot of fun scenes that will bring back audiences' memories of their childhoods. Take the scene in which the towering figure that is Armie Hammer dances like nobody's watching, fo instance. Even before the movie had its widespread release, the scene became an internet sensation after people discovered not only that it's a wonderful treat, but also that Hammer's moves work with any song.

Directed by Luca Guadagnino, Call Me By Your Name is already emitting an Oscar buzz, and that's due in part to the nostalgia-inducing moments like the dance scene. Even though it's not a true story, the film feels like one, and moviegoers may find themselves thinking about their own summer flings of yore. After all, young love always sparks audiences' nostalgia in the best way possible. Paired with the '80s nostalgia that's basically everywhere in TV and film right now, Call Me By Your Name will probably make everyone reminisce about the sweet summer romances of their pasts, and what could be better than that?