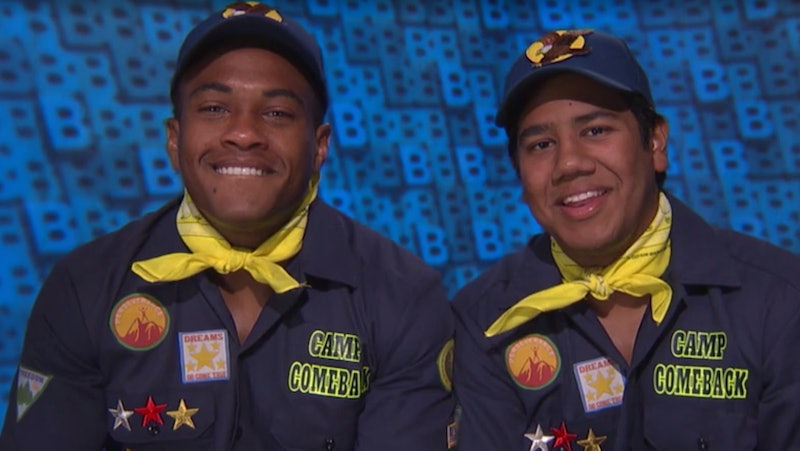 Things work a little differently for evicted houseguests on Big Brother 21. Camp Comeback allows the first four eliminated contestants to return to the game... to an extent. So far Ovi and David are in Camp Comeback (complete with scout-esque costumes that they have to wear 24/7), and they are still in the house. That means they get to keep playing a social game — even though they can't play in any of the competitions. After four weeks, one of the Camp Comeback contestants will 100 percent return to the game and the rest will be permanently evicted.

Staying in the house in the meantime is already giving Ovi and David a huge leg up on the competition should they return.

Ovi and David can't watch ceremonies (noms or POV) or comps (Veto and HoH) live, but they do get to see them on a black and white TV in the Camp Comeback room. (That's where they have to sleep every night. It's sort of like a Have-Not room in its uncomfortableness.) So David and Ovi are getting to see everything that happens, even when they can't participate. But the biggest advantage is that they still get to be present for game-related conversations.

When Camp Comeback started, Jack tried to put a moratorium on game talk with David and Ovi. He called a house meeting and suggested (demanded, really) that no one talk about game related content with them. Everyone agreed. And then pretty much everyone immediately broke that "rule." (It was only Jack's rule, Julie Chen specifically said that they could play the social game.) Ovi's been in so much game talk that he joined an alliance when he can't even officially play. The alliance is Fellowship of the Zing with Cliff and Nicole. However, Cliff accidentally revealed this alliance to Christie when she overheard him talking about it to the cameras. So it remains to be seen if Ovi will get to reap any benefits from this alliance should he return.

David, on the other hand, has been a bit more ostracized from game talk. This is partially owing to the fact that he was banished from the game by Michie relatively early on and didn't get a chance to form friendship bonds like Ovi. Still, David has gotten close to Kat and has tried to integrate himself into the game as much as possible. And, he is super observant.

On the July 10 episode, David recapped everything he suspected about the house and he had it basically 100 percent accurate. He guessed that Jack and Michie were the power players who everyone else was kind of following. He suspected that there was a big alliance running the house and then he basically perfectly guessed all eight members of Gr8ful. (He noticed that they all hang out together a lot.) He correctly guessed the couples of the game as being Jack and Sis, Michie and Holly, and Nick and Bella. He also suspected that Sam was a wildcard who wasn't really in an alliance. Also correct. If David comes back into the game, all that knowledge would be super helpful for him to have.

Two more players will join Camp Comeback in the coming week or so. Either Jess or Kemi will be next on June 11 and then it's anyone's guess for who the fourth will be. However, Bella, Cliff, Nicole, and Nick have all been discussed as possible targets. It's also not yet known how the winning Camp Comeback player will earn their way into the house. Christie thinks it will be a house vote, it could be a viewer vote, or, more likely, it could be a competition.

Competing is what most of the returning evictees have had to do in recent seasons. But no matter who the returning player is, they have a leg up just by virtue of having never left the game. If it's David who comes back, the house better watch out because he knows what's going on to a T.