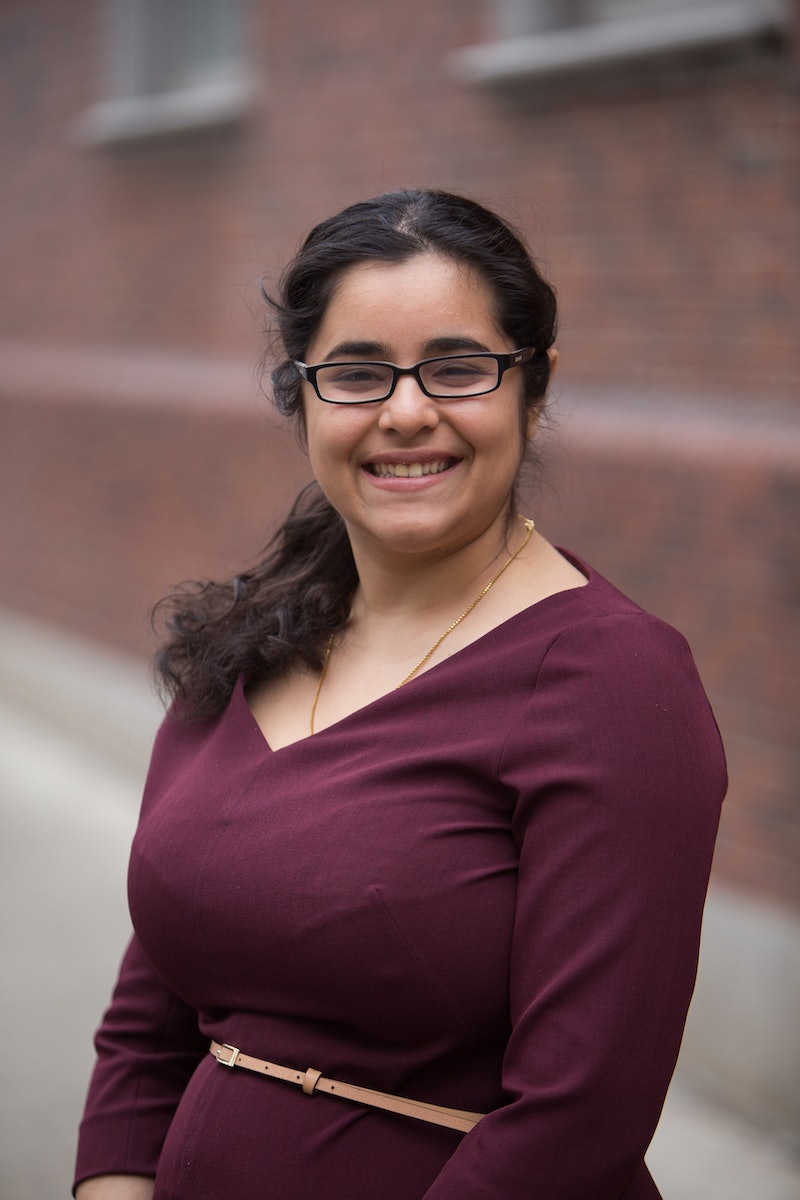 Last Thursday, I was following media coverage of the protest against Medicaid cuts held at Mitch McConnell’s office, and I noticed a familiar phenomenon — one that exists whenever people with disabilities are covered in the news. Though images of protestors being dragged out of the Capitol building by police went viral, many of the posts and articles did not include the protestors names, professions, or that the protest was organized by grassroots disability rights organization ADAPT; few also included statements from the press release ADAPT issued. The day’s most famous video, of Stephanie Woodward, a lawyer, being removed from her wheelchair by police was shared tens of thousands of times. But, by and large, those shares failed to mention her name, profession or that this was a protest organized by people with disabilities.

This happened even though the individual protesters were being identified by prominent disability rights activists and by ADAPT on social media. Additionally, many news outlets, including The Hill and CBS News, referred to the organizers only as protestors with disabilities — The Hill merely noted that police “forcibly removing protesters from the building, some of them in wheelchairs,” while CBS reported only that "Many of those participating in the sit-in were disabled, and one protester held a sign reading ‘Capping Medicaid = death 4 disabled.’”

These protestors with disabilities were self-organized people with names and jobs — but in much of the reporting, they were simply described as disabled, as if that is their entire identity. However, that unwillingness to delve into the lives of the protesters didn't prevent commentators from using the images to further their political narratives — like in this MSNBC clip, where commentators discuss political strategy regarding the health care bill over images of protestors, without discussing how the policy they're discussing would actually impact the lives of the people pictured.

Of course, using people with disabilities as pawns in a political argument without any real agency is not new in the health care debate — as a lawyer, person with a disability, and co-creator of the Resistance Manual, it’s a topic that I know a lot about. It’s been happening for months, as various politicians and community members and leaders (who do not publicly identify as disabled) have been given endless media coverage to express concerns about the ACAs repeal’s impact on disability communities — in articles that typically fail to interview members of the disability community or disability rights organizations. The New York Times story on the Senate health care bill notes its deep cuts to Medicaid in the headline, and includes quotes from a medical school association, a professor and President Obama — but fails to interview anyone actually impacted by the cuts. Expressing concern about people with disabilities, while failing to actually speak to any of them, is standard practice far too often in the health care discussion.

"These protestors with disabilities were self-organized people with names and jobs — but in much of the reporting, they were simply described as disabled, as if that is their entire identity."

I speak from personal experience about this issue. Andy Slavitt, Obama’s director of Medicaid and Medicare, recently shared on Twitter that he was receiving requests from many news outlets to discuss how the ACA repeal proposals would impact people with disabilities. While a governmental expert, Andy Slavitt, to my knowledge, is not a person with a disability or a person who can speak about how changes to these programs would impact actually impact members of the disability community. I reached out to Mr. Slavitt, exasperated that people in the disability community were not equally inundated with requests, suggesting that he encourage journalists to speak with people in the disability community. He shared my comment and encouraged journalists to reach out to those impacted by these changes in policies, many of whom, undoubtedly, follow him:

Slavitt had also shared a video I made explaining policy on the ACA repeal. But despite Slavitt's encouragement, exactly zero media outlets reached out to me afterwards.

This practice of marginalizing the voices of actual people with disabilities isn't limited to discussions of health care. As DisBeat, The Disability View on News, told Bustle, "Politics, the economy, sexuality, healthcare, natural disasters, race relations — every day there are breaking news and media images on these and other issues. Such stories and images have a powerful impact on all of us, but they seldom discuss or articulate the experiences and perspectives of people with disabilities."

"Our future is being decided without input from us. As a disabled person, I’m dismayed by this, but not surprised; we are so often treated as an afterthought in our own futures.”

This is such a pervasive issue that a March 2016 white paper on media coverage of disability and police violence, published by philanthropic organization the Ruderman Family Foundation, found that while coverage of mental illness has grown in the last couple of years, “Other forms of disability and meaningful responses to them remain significantly underreported." The report went on to lay out some best practices for reporters, the Ruderman paper included one that should not need to be stated: “Don’t blame the victim.” But in many publications, coverage of people with disabilities misses the mark in important ways.

Media erasure of people with disabilities is more than just a theoretical issue — it has a real-life impact on the lives of people with disabilities. Serene Vannoy, the current disability rights team lead on the Resistance Manual, told Bustle, “Of the top nine article results on my Google alert for ‘AHCA’ today about the health care bill, only one (an article about the impact on veterans) talked about disability in the first few paragraphs. None—not one—quoted a disabled person at all. Our future is being decided without input from us. As a disabled person, I’m dismayed by this, but not surprised; we are so often treated as an afterthought in our own futures.”

Erasure informs how we conceive of these societal issues, whether in regard to health care, police violence or any other social justice issue. If the treatment of people with disabilities is not included in our understanding of the problems, then it will not be considered in the solutions. For example, amendments and possible changes to the ACA repeal legislation will not ensure, if caps on Medicaid are implemented, that people with disabilities are able to remain in our communities and not institutionalized. This is because the discussion about the impacts to Medicaid under a repeal of the ACA rarely includes adults with disabilities and how it facilitates their ability to live in the community.

It is my belief that the media simply does not grasp that those with disabilities, like those with any other identity, are experts on their own lives and can best speak to the consequences of a policy decision — and that there are also some of us who have legal training and can speak about the law, in addition to being disabled. It’s also rarely recognized as that people with disabilities are often the front and center of movements, not just for disability rights, but for all movements. I believe this is because, as a society, we are still learning how to think intersectionally and understand that, someone like me, exists in the world as a woman, an immigrant, a lawyer, and a person with a disability, all at the same time. But rather than being viewed as experts with insight into the ACA repeal and other issues, we’re erased from the narrative.

People with disabilities live multi-dimensional lives and are not victims in our own stories, a fact that news media narratives rarely take into account. If media outlets represented people with disabilities accurately, they would realize that we come in all shapes and colors, professions, and talents. When I think about the limitations and challenges in my life due to my epilepsy compared to the perspective and empathy I have gained as a result of having it, I would not want to be cured of it. Furthermore, for many people in the disability community, the suggestion of being cured of our disabilities is insulting. I do not believe I need to be fixed, because I am not broken. The world may create barriers to my full participation sometimes, but I am a whole person.

"If media outlets represented people with disabilities accurately, they would realize that we come in all shapes and colors, professions, and talents."

In fact, my disability made me a more effective leader and co-founder of a resistance organization, the Resistance Manual (an organization that I recently left; Stay Woke, the organization I partnered with, continues to lead it) — the principles and guidelines I created for that organization were built off of my lived experience with epilepsy and needs for flexibility that my peers didn’t always require or understand. As a result, I made sure that no one volunteering under my leadership would feel like they couldn’t participate for want of an accommodation. But stories like these rarely seem to find their ways into mainstream media narratives.

The good news is that in the era of social media, people don’t have to wait for major media outlets to change their practices. They can learn directly from the disability community through online hashtags like #CriptheVote (created by Alice Wong, Andrew Pulrang and Gregg Beratan). They can follow or subscribe to newsletters from organizations like Rooted in Rights or ADAPT to hear directly from people with disabilities. Those that are organizing events can look to the Autistic Self Advocacy Network for a resource on accessible event planning. Just last week, DisabledWriters.com launched to help editors find journalists with disabilities to write about our experiences and from our perspective about issues pertaining to disability and those that do not. For those reading this who are just learning about disability and ableism, they can start with an intersectional syllabus by Vilissa Thompson on black disabled women.

Like any other community, the disability community deserves the agency to speak for ourselves and our lived experiences. We should be centered in conversations about people with disabilities rather than listed as a talking point by politicians or advocacy organizations (I have received such a list before). And the erosion of norms in American politics and media today should not prevent people from attempting to continue to make progress in the spheres where they have control. If you are outraged at the way President Trump made fun of the New York Times reporter during the last campaign, ask yourself what you do in your daily life to ensure that people with disabilities are not used us pawns in politics, but rather embraced in our full humanity.