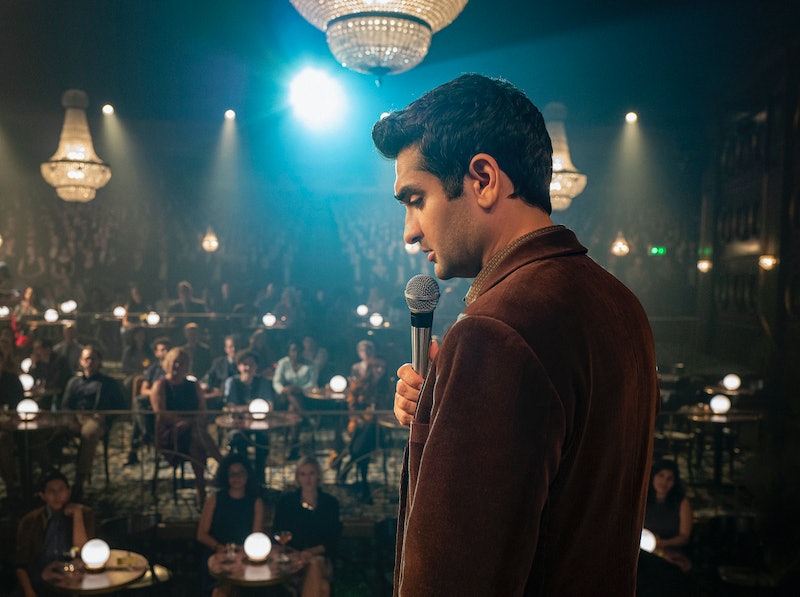 It may be April Fool’s Day, but don’t worry, this isn’t a joke. Fans can watch The Twilight Zone without CBS All Access, or at least, they can watch the first episode, which is now streaming for free on YouTube. This means that audiences can watch the premiere of Jordan Peele's highly anticipated revival of The Twilight Zone for free without having to sign up for CBS All Access — at least not yet. After finishing the first episode, you might be itching to find out how Peele and his star-studded cast takes on Rod Serling’s chilling, twisted series. And then, you're on your own.

The show’s premiere is entitled “The Comedian” and stars The Big Sick star Kumail Nanjiani as Samir Wassan, an aspiring comedian who wants to be famous, and will go to great lengths to achieve that goal. In a trailer for the episode, Wassan is tempted by a legendary comic, portrayed by Tracy Morgan, into making a deal for success. But, once the deal is struck, mysterious events begin to occur, and his life unravels into utter chaos.

Nanjiani announced that the new episode was available on YouTube via his Twitter account. He shared the good news and a link with fans, writing, "I’m in this episode and it truly is a dream come true. I've never done anything like this episode before.”

For the new series, Peele is stepping into Serling’s former role as narrator and host of The Twilight Zone, as well as serving as an executive producer. The famed director of horror hits Us and Get Out was initially reluctant to take the job due to the high standard that the original show set. “I felt like it’s the greatest show of all time,” Peele said in an interview with Entertainment Weekly. “We were tentative to step in. There are many ways to fail at this.”

The show's producers had to convince Peele that he was the right man to fill Serling's shoes. “The other producers believed in that idea; I was kind of reluctant,” he told EW. “I didn’t want this to look like, ‘Hey, the presumptuous Key and Peele guy thinks he’s f—ing Rod Serling.’ But you only live once—let’s try to host The Twilight Zone.”

In addition to Peele, the revival also has a star-studded cast that combines established TV actors with up-and-coming stars. In addition to Morgan and Nanjiani, the lineup includes Seth Rogan, Adam Scott, Greg Kinnear, Sanaa Lathan, Ginnifer Goodwin, Steven Yeun, Jessica Williams, Taissa Farmiga, and a slightly more grown-up Jacob Tremblay, who will appear with his real-life sister Erica. There’s no word yet on whether Peele’s famous comedic counterpart, Keegan Michael-Key, will make an appearance on the show, but we’d love to see the hilarious actor get spooky.

“The Comedian” is the first of two episodes to premiere on Monday, April 1. The second episode, “Nightmare at 30,000 Feet,” was released solely on CBS All Access and pays homage to one of the original series’ iconic episodes, “Nightmare at 20,000 Feet,” with Scott stepping into William Shatner’s shoes as he boards a particularly frightening trip in the sky.

The series will return with new episodes on April 11, and will continue to launch new weekly episodes every Thursday until May 30.