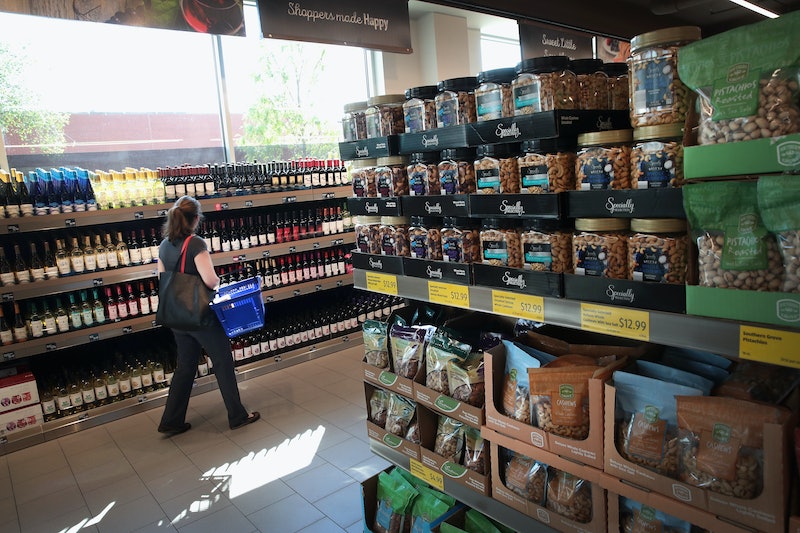 At midnight on Sunday, new tariffs on American goods shipped to Canada officially went into effect. They're a direct retaliatory action against other tariffs that President Donald Trump has chosen to implement in recent months, and they may just pack a punch. Of course, since many of the new tariffs are imposed on food goods, the immediate question for many will be how Canada's tariffs on U.S. Goods will impact grocery bills. As with many economic questions, the answer is that it's complicated.

Some of the products facing tariffs are caffeinated roasted coffee, maple syrup, pizza, strawberry jam, ketchup, tomato sauce, mayonnaise, soups, whiskies, and waters. All of the goods subject to the new tariffs will be subject to additional fees when they are imported to Canada.

Tariffs, as a refresher, discourage imports by making those imports more expensive. In theory, because the price to import the above listed goods will go up, Canadian shoppers will be less inclined to buy the American version of those products. This can harm U.S. businesses by causing them to lose business from customers or merchandisers who don't want to pay the extra fee. This is especially true if a local version of the product is readily available.

Canada's tariffs are a direct reaction to steel and aluminum tariffs which Trump opted to impose against Canada, Mexico, and the European Union. Those tariffs went into effect on June 1.

"This is $16.6 billion of retaliation," Canadian Foreign Affairs Minister Chrystia Freeland said of Canada's decision, according to Global News. "This is the strongest trade action Canada has taken in the post-war era. This is a very strong response, it is a proportionate response, it is perfectly reciprocal. This is a very strong Canadian action in response to a very bad U.S. decision."

But when it comes to figuring out how, exactly, these imports could affect U.S. grocery bills, there's no sure-fire way to know. It depends on many factors, like how many Canadian shoppers were buying that U.S.-imported good in the first place. If a lot of Canadian shoppers are buying U.S. ketchup, for example, then U.S. ketchup companies could be facing significant losses. If that's the case, it's possible that those companies would raise prices in the United States in order to help make up the difference.

Canada isn't the only country that plans to clap back at Trump's aluminum and steel tariffs, either. According to CNBC, the European Union has already slapped imports on a series of U.S. goods. China and Mexico reportedly have tariff plans of their own in the works, too.

Trump has long framed himself as an adamant protector of the motor vehicle industry, but according to The New York Times, his steel and aluminum tariffs may be shaping up to negatively impact that very industry. Harley Davidson already announced that it was moving some of its production to Europe, in order to avoid the E.U.'s retaliatory tariffs.

According to the Times, Harley Davidson said that moving "is not the company’s preference, but represents the only sustainable option to make its motorcycles accessible to customers in the E.U. and maintain a viable business in Europe."

Effectively, Trump has triggered an escalating trade war that has no end in sight. The longer that it goes on — the longer that tariffs are imposed and retaliated against — the more likely it is that U.S. consumers will begin to see an impact. While it's too soon to determine to what extent grocery bills will be directly impacted in the United States, it's safe to say that they will probably be impacted at some point. At this point, its more of a matter of when.