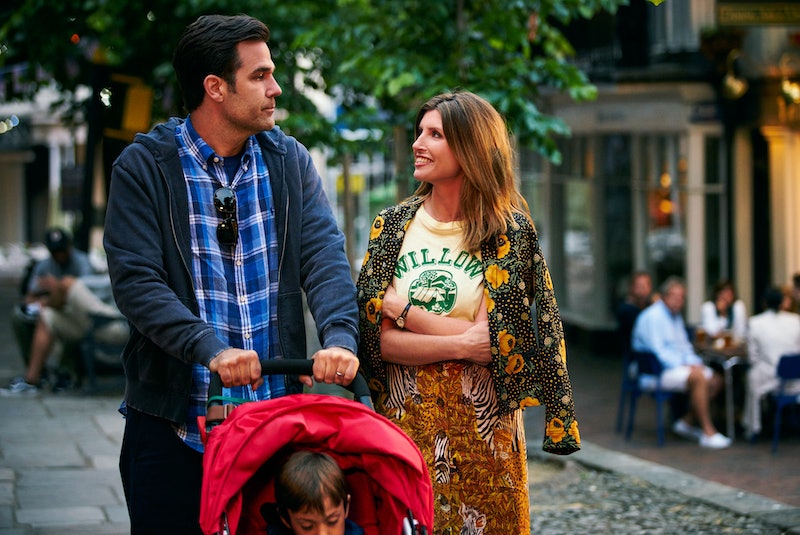 The very title of Amazon Prime's comedy, Catastrophe, invokes an inescapable, imminent disaster — the impending doom being the threat of domesticity. But Catastrophe co-creators Sharon Horgan and Rob Delaney have managed to thread the needle between serious subjects (the death of parents, the crushing weight of addiction and relapses, to name a few) with their signature brand of cynical, dark humor. And although Catastrophe — whose fourth and final season premieres Friday, March 15 on Amazon Prime — is much darker this time around, it's also the perfect send-off for the onscreen duo, whose one-week-stand resulted in a pregnancy and marriage.

The season gets off to a somber start, with Rob in recovery after relapsing into alcohol addiction last season and ultimately getting in a car accident. It was a dark end to Season 3, but Delaney was eager to continue exploring the messiness of addiction in the final season. "You start to see stuff like that happen with your friends," Delaney explains. "I mean, probably everybody knows at least one person who is grappling with drink or drug problems that aren't convenient, aren't pleasant, and do wreak real havoc in people's lives... And so we just did that because that's a real thing that happens, and we hoped we could get some good story and laughs out of it."

The laughs in question are scattered strategically throughout Catastrophe's final season and are as unexpected as they are side-splitting. Viewers catch a glimpse of Rob's phone, for example, which reveals that his wife is still saved as "Sharon London Sex." In another highlight, Sharon sits in the front row at a production of Twelfth Night that Chris and Fran's son is headlining, only to realize that the performers are all completely naked. Fran bursts into tears as soon as she sees Jeffrey, naked as they day he was born.

"I think we approach our stories like a drama writer would approach their stories," Horgan explains. "And then you got to go back and do the heavy lifting of... making it funny." Delaney cites Airplane! writers David and Jerry Zucker, who "would write a good script that told a story that you really cared about and wanted to know what was going to happen next, and they'd get that out of the way, and throughout the script it would say 'JTC,' which stood for Joke to Come," the Catastrophe star explains. "We wouldn't actually write 'JTC,' but we'd read it and be like, 'Well, there's a J-shaped hole right there!' And then go back and make sure it was funny."

The final episode follows Rob as he grapples with the unexpected loss of his mother, Mia (Carrie Fisher). And while the Star Wars actor died in late 2016, Delaney and Horgan held off on addressing her death until the very end of Season 4. "When someone of the stature of Carrie Fisher dies, everyone in the world — I mean, people in Tibetan villages know that Carrie Fisher died," Delaney points out. "We're not going to surprise people with it. But we did hope to sort of save it until the ending."

"And to move people with that news somehow," Horgan adds. "But I think it was the thing that we spent the longest talking about and trying to figure out how we'd do it. I mean, there was definitely discussions along the way of it being in an earlier episode, but I'm so glad we waited." The result is, without spoiling too much, both gorgeous and true to Carrie Fisher's memory.

The series finale is unexpectedly sincere, and lines land without jokes to undercut them. Rob and Sharon are faced with some weighty decisions, prompting them to discuss whether they would have gotten together if not for her unplanned pregnancy. "They really, really probably wouldn't have!" Delaney theorizes. "But thank God that they did!"

Indeed, Rob and Sharon's marriage is simultaneously harsh and loving, with husband and wife often in competition with each other. "It's better for Sharon and Rob to show that they love each other rather than say it," Delaney says. "And a little bit goes a long way... Like, if you see one looking at the other one while the other one isn't looking? I mean, forget about it. That's better than 10 pages of saying, 'I love you, I love you!'"

But however they got together, and whatever they end up doing after the credits roll, it's comforting to know that Catastrophe's protagonists will be staring — together — off the edge of the cliff.