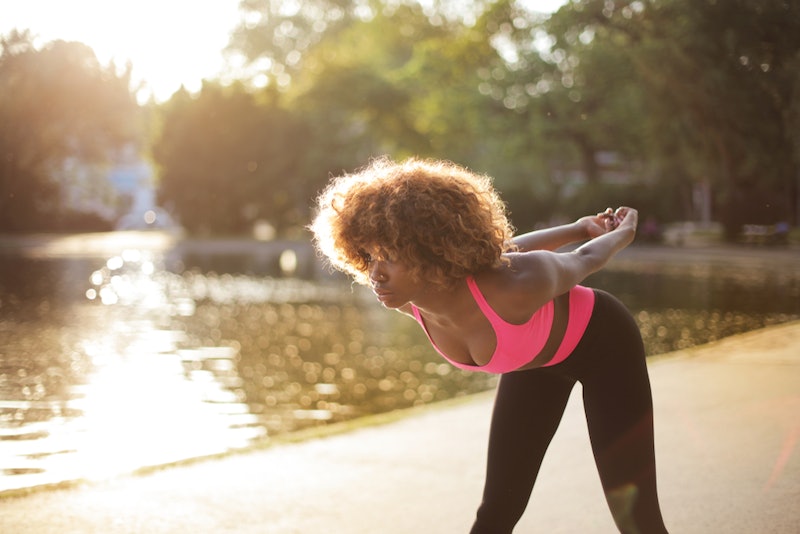 If you’ve ever stopped your regular Sunday long run after two miles because it was way too hot to keep going, you have experienced firsthand how climate change affects your workouts. Climate change is happening all around us — and it impacts everything from cities’ air quality, to heat indexes, to ocean levels, which all in turn affect how we go about our day-to-day lives. But because thinking about these large-scale changes in the abstract can be scary — not to mention hard to comprehend — it sometimes helps to look at the climate crisis in terms of something a little closer to home.

“People get paralyzed by fear [of climate change]," Noel Kinder, Nike’s Chief Sustainability Officer, tells me at an event at Nike’s New York headquarters on the brand’s “Move to Zero” sustainability goals. “If you can make it directly relatable to something that they care about, like going for a run or playing soccer, then maybe it’ll resonate more.”

That’s why Nike’s sustainability team partnered with the Rhodium Group, an independent research provider, to analyze data from the Climate Impact Lab, looking at how climate change has impacted sports over the last few generations, and how it will continue to affect sports for decades to come.

These statistics cover sports from running, to tennis, to soccer, and snowboarding. They found, for example, that “marathon runners clock their fastest times on days when the average outdoor temperature is around 50°Fahrenheit/10° Celsius. This interaction proves true for amateurs and professionals alike, with speeds deteriorating as the mercury rises.” This means that as temperatures rise — and, as NASA data shows, the Earth has warmed by 1.4 degrees Fahrenheit since 1880, with two-thirds of that warming happening since 1975 — runners will no longer be able to clock PRs as we take for granted today, or even jog as efficiently.

The report also found that soccer players experienced 20% more extremely hot days than in 1990, and that by 2050, that number could rise to 70% more hot days than 1990. That’s a lot of days off the field and games cancelled — or, it’s a lot of days suffering through extreme heat. Kinder tells me how his daughter learned in school that the turf her team plays on retains 15 more degrees than the ambient temperature — so when it’s 90 degrees out, that turf you slide on as you kick a goal into the net is 105 degrees. That hurts.

“When you talk about exercise, there's a couple of things to consider,” Dr. Elizabeth Barchi MD, a sports medicine specialist at NYU Langone Health who was not involved with the Nike research, tells Bustle. Temperature, brightness, and humidity all change your body’s ability to dissipate heat, Dr. Barchi says. “If temperatures are rising on average, that's gonna change the window of time that you have to be working out during the day,” she adds.

Additionally, air quality, or lack thereof, can significantly impact a person’s ability to work out, Dr. Barchi says, and elite athletes and everyday exercisers alike are affected by it.

Vashti Cunningham, a Nike track and field athlete, trains outdoors in Las Vegas, Nevada. “I've been out on the track when it's 120 degrees,” she tells Bustle. But even as hot as it gets, she still heat trains by wearing two pairs of tights for her warmups. “It puts me at an advantage,” she says, because her body’s so used to the heat. “I appreciate training in the heat, but it's not how it's supposed to be.” The day after we talk, she heads to Doha, Qatar for the IAAF World Championships.

If thinking about climate change in terms of working out and sport encourages people to act, then that’s a good thing.

Olympic fencer Ibtihaj Muhammad tells me that even though her sport takes place indoors, she still trains outside. “I live in Los Angeles, and I love to run and work out outside. That’s one of the cool things about being in an area that’s 100% sunny all the time.” Still, she says, she has to plan these workouts around heat or smog advisories, especially with the recent wildfires that researchers say are exacerbated in part by climate change.

Dr. Barchi says that anyone who has to work out in extreme heat should be aware of the symptoms of heat illness, like dizziness, rapid pulse, or excessive exhaustion. “Find a shady spot to cool down. Make sure you’re drinking water. If it’s not getting better within 10 minutes of rest, it’s best to just call it a day.” For people who may be sensitive to air quality issues, Dr. Barchi suggests working out inside or using a bandana to filter the air.

Even for people who are not elite athletes, these statistics are concerning. If it’s harder to work out because of climate change, it’ll be harder to get the rush of endorphins that come from clocking a new mile time, or the me-time that comes from running that 10K loop, or the team bonding from your weekly softball game. This is also, admittedly, speaking from a place of privilege — my morning workout is certainly not as high priority as the vast areas of Earth that will become uninhabitable because of heat, flooding, and other factors. But if thinking about climate change in terms of working out and sport encourages people to act, then that’s a good thing. Whether that’s by implementing more environmentally friendly practices in your daily life, like committing to a plant-based lifestyle or cutting down on waste, or by taking action through calling your representatives or engaging in climate strikes, individual actions can make a big difference.