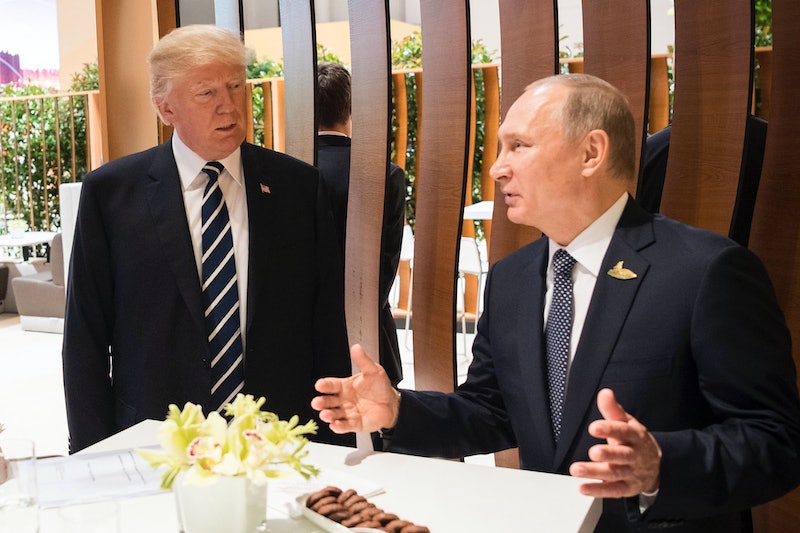 The exact relationship between President Donald Trump and Russia's leader Vladimir Putin is a long-running mystery. Years prior to his presidency, Trump bragged about his closeness with Putin in TV interviews, but after it was seen as a political liability during his campaign, Trump publicly backpedaled. For some, how close Trump is with Putin may be a point of concern ahead of the North Atlantic Treaty Organization (NATO) summit meeting, as allies worry that Trump might take on the "role of agitator" among allies to "play into Putin’s hands," The New York Times reported.

Trump is due to arrive in Brussels on Tuesday, the day before the NATO meeting. He'll then fly to Finland, where he's expected to meet Putin one-on-one in Helsinki to “continue to hold Russia accountable for its malign activities,” said Jon M. Huntsman Jr., the United States envoy to Moscow, according to The New York Times. That accountability includes Putin’s election meddling in the United States. The two leaders are also expected to talk about arms control and the conflict in Syria.

While he's since met with Putin several times during his presidency, the prior ties are not as clear. During a 2013 interview about Trump's Miss Universe pageant in Moscow, a reporter asked Trump about his relationship with Putin. In the interview, Trump replied:

Then, in 2014, while giving a speech at the Conservative Political Action Conference, Trump boasted about receiving a "beautiful" present from Putin while he was in Moscow for the Miss Universe pageant, according to BuzzFeed News.

You know, I was in Moscow a couple months ago, I own the Miss Universe pageant and they treated me so great. Putin even sent me a present, beautiful present, with a beautiful note. I spoke to all of his people. You look at what he's doing with President Obama. He's like toying with him. He's toying with him.

But just a few years later during his campaign, Trump claims not to know who Putin is. As the general election came to a head, allegations of Russian election hackers and Kremlin assistance put Trump's relationship with Putin under the spotlight. When reporters asked Trump about this, he answered, "I never met Putin, I don’t know who Putin is. He said one nice thing about me. He said I’m a genius. I said thank you very much to the newspaper and that was the end of it. I never met Putin.”

Trump then repeats himself, saying, “I have nothing to do with Putin. I’ve never spoken to him. I don’t know anything about him other than he will respect me.”

It's a stance he has continued to stand by through his inauguration. A little into his presidency in 2017, Trump reaffirms his non-existent relationship with Putin in a tweet.

Then, finally, in July of 2017, the official meeting between the world leaders was documented around the world as the two shook hands on the sidelines of the G-20 summit in Hamburg, Germany.

Since then, the two have met several times. According to Newsweek, Trump said he directly asked Putin about the election meddling and reported that Putin denied — twice — any trespass by Russia.

This week's NATO summit will certainly be a test of Trump's priorities. As The New York Times reported, Trump is viewed as an unpredictable "wild card," more consumed with military spending comparisons than showing unity against Russian threats. Trump might act the way he did at the G-7 summit. And that concern is enough to leave NATO allies scrambling about what this means for the military security of each member nation.