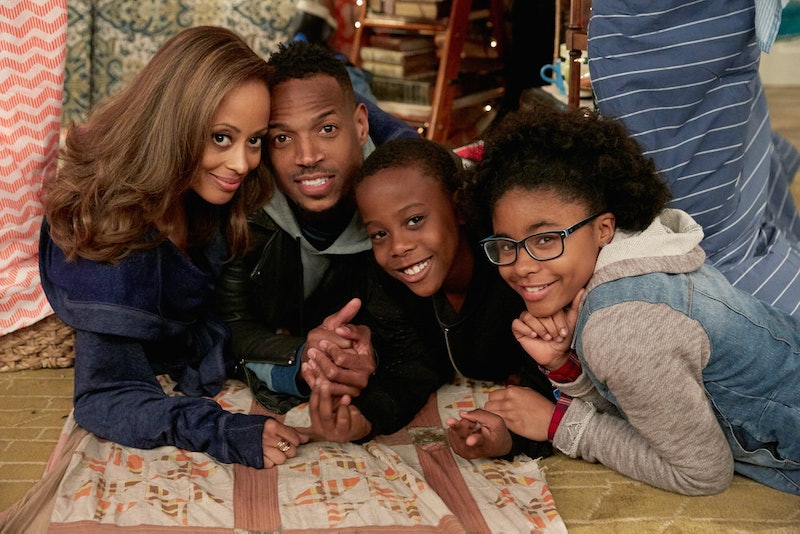 Marlon Wayans' new NBC sitcom premieres Aug. 16 and stars the actor and comedian as a divorced dad of two. In contrast to the pseudo-cinematic style of semi-autobiographical shows like Master Of None and Louie, the series is an old-school multi-cam sitcom, complete with a laugh-track. So while situations will definitely be heightened for the sake of comedy, Marlon is based on Marlon Wayans' life, at least loosely.

In The New York Times, the star and creator pointed to his real-life breakup as the jumping off point for the series. "It was a breakup, and when you go through a breakup what you find is you have two choices," Wayans said. "You can break up, or you can develop a new chapter of love and respect for one another." He told the publication that he examined his options and asked himself, "Why does it have to mean the end of my family?" So in Marlon, audiences will see two parents (played by Wayans and Essence Atkins) who are no longer married, harmoniously co-parenting — a reality that other former couples are living as well.

Sitcoms are sorely lacking in diversity — not just racially, ethnically, culturally, etc. — but in terms of family structure. There are only a few sitcoms about single parents on the air currently (Mom, One Day at a Time), and rarely are happily divorced people the center of a family comedy. But according to the American Psychological Association, between 40 and 50 percent of married couples will divorce. That means there will be a whole lot of divorced individuals out there watching TV. So Marlon aims to be relatable to that audience, and to those who grew up with divorced parents.

Wayans told The New York Times in the same interview that he sees his character as a unique take on the usual TV dad. "What I love about the show is that it’s me — it’s my matrix, it’s my soul," he said. "I’m severely inappropriate, I’m crazy, I’m wild. But I’m sweet as all hell, I’m very responsible and I have my own version of respectful." Now, that archetype doesn't really seem all that different from the usual structure — usually the dad is the "fun" parent, while the mom watches, disapprovingly — but Wayans seems convinced that his performance will help set Marlon apart.

Like his character, Wayans has two teenage children, a boy and a girl. He rarely posts about his kids on social media, preferring to promote whatever projects he's working on or share political comments. But in a recent Instagram post, Wayans opened up about how much he loves his kids. In a lengthy caption, he wrote, "One of my greatest joys in the world has been being a father," and "now that they are 15 & 17 I hope they know how much I love them. I hope they know I'm on their side. I hope they know I love them unconditionally." He also lamented how often he needs to be away from his kids in order to work, and talked about hoping that he can help prepare them for life's challenges

On Marlon, his character might be a slightly inappropriate dad who hasn't completely grown up, but in real life, Wayans obviously cares deeply about maintaining a relationship with his children.

"I spend more time with my family now than I did before," Wayans told The New York Times of this era in his life. And he also shared that his friendship with his ex, Angela Zackary, has improved too. "The relationship is very strong, communication is better, and it’s actually a lot more peaceful and loving," said Wayans. "You don’t have to break up your family because you and your partner broke up. You still have to father your children, you still have to communicate, you still have to grow your family together."

Marlon might seem like just another family comedy on the surface, but it's inspired by a genuine and common dynamic that isn't often depicted on TV.