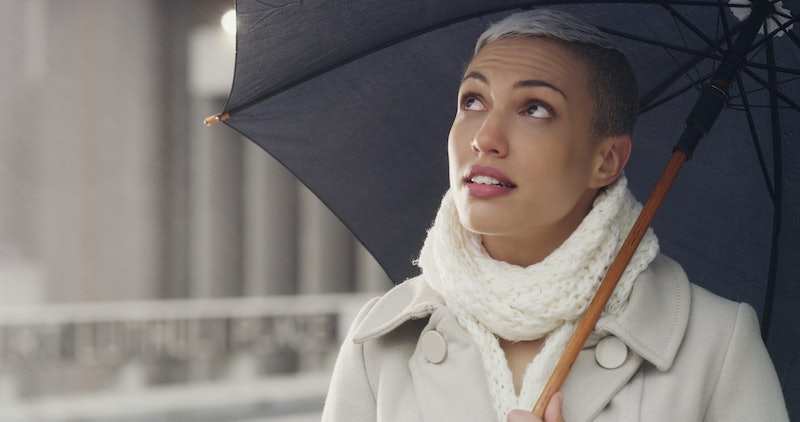 When winter arrives and temperatures plummet, you may feel as if your thinking slows and becomes more sluggish — or you might believe that the cold weather actually gives you a more awake, alert edge that warmer months don't. In reality, there's a lot of disagreement among scientists about how cold weather really affects the brain. It may give some people a beneficial boost — and it might create problems for others.

Unlike your sweater-wearing body, your brain itself doesn't register the change in temperature in any physical way. “Your actual brain is locked up inside an insulated safe with its own heating system, like radiant floor heating in a ski chalet," Dr. Clifford Segil, M.D., a neurologist at Providence Saint John's Health Center, tells Bustle. He explains that the body's central nervous system, which includes the spinal column and brain, is encased in bone to protect it. Aside from insulating bone, there are also other substances keeping the brain warm: a layer of shock absorption tissue on the inside of the skull called the meninges, and a fluid that runs across the surface of the brain and spinal cord, called cerebrospinal fluid. "The brain is placed inside these structures to keep it a perfect temperature to work," Dr. Segil says.

This internal protection is so formidable, Dr. Segil explains, that it can determine whether a drowning person might survive. "Patients who drown in ice-cold frigid water and are pulled out sometimes do better than patients who drown in hot tubs," he tells Bustle. "Freezing someone’s head is not going to result in the brain cooling, though it may cause frostbite on their ears or nose," Dr. Segil says. The brain is very well-protected from the outer world inside the body, even in extreme cold temperatures.

While your brain isn't going to physically encounter the cold, there's disagreement about whether cool temperatures might affect its activity and performance. A small study of 28 people published in Proceedings of the National Academy of Sciences in 2016 found that peoples' brain activity changed depending on the season — but that they performed the same on tasks regardless of the time of year. In colder weather, brain activity around attention was lower than in summer, while brain activity related to working memory was higher. The researchers think that our brains might work in different ways depending on the season, but the study didn't show that it altered thinking or performance in any way.

The idea that being exposed to cold might improve cognitive performance is still pretty controversial. A review of the science around cold and cognition, published in Autonomic Neuroscience in 2017, found that being exposed to cold, whether or not people were allowed to acclimatize to it, "appears to offer no added benefit of improving cognitive performance." And studies have actually shown that a variation of temperatures seem to affect people in different ways.

One study conducted in Germany in 2014 found that people's working memories functioned best when they were in comfortable temperatures, while another published in PLOS One in 2019 discovered that women actually performed better in math and verbal tests at hotter temperatures, while men did better at lower temperatures. The study became a rallying cry against ice-cold air conditioning in offices. Another study in 2012 noted that in warm temperatures of 77 degrees, people made less sensible decisions and were less likely to make difficult gambling choices. The relationship between temperature and performance is a really complicated one.

The studies didn't have any insight into why these temperatures may have affected people in different ways, but it's possible that comfort may play a big role — if we're in an environment where we feel comfortable, we may be more productive, while discomfort of any kind may throw off our cognitive performance. It's not clear whether seasonal changes in brain activity affect this.

Cold weather can also affect mood in some people, which can lead to seasonal affective disorder. "Almost a fourth of the population deals with an increase in depression during the colder and darker months," Dr. Matt VanDusen Psy.D., clinical director for Delphi Behavioral Health Group’s California programs, tells Bustle. He notes that the disorder has been linked to decreases in exposure to natural light, disruption in our circadian sleep rhythms and lower levels of vitamin D due to shorter days. People who experience the disorder should maximize their time outside and take some supplements with guidance from their doctor. "Providing high doses of vitamin D has shown to have significant antidepressant effect on individuals affected by SAD," he says.

If you feel like winter perks you up while your best friend thinks it slows them down, you may both be right. Science is still only scratching the surface of cold's affects on your cognitive performance. However you feel, though, it's comforting to think that no matter how cool it gets, the brain is snuggled up like a bug in a rug — and is basically surviving winter in a custom-made sauna.

More like this
23 Super Sweet Things To Write In A Valentine's Day Card
By Karen Belz and Lexi Inks
The 11 Benefits Of Aerial Yoga, According To Trainers
By Carolyn Steber
Ashamed Of Your Screen Time Stats? Here's How To Change That
By Alexis Morillo
11 Exercises For Dowager's Hump That'll Help Your Neck Posture
By Carolyn Steber
Get Even More From Bustle — Sign Up For The Newsletter
From hair trends to relationship advice, our daily newsletter has everything you need to sound like a person who’s on TikTok, even if you aren’t.