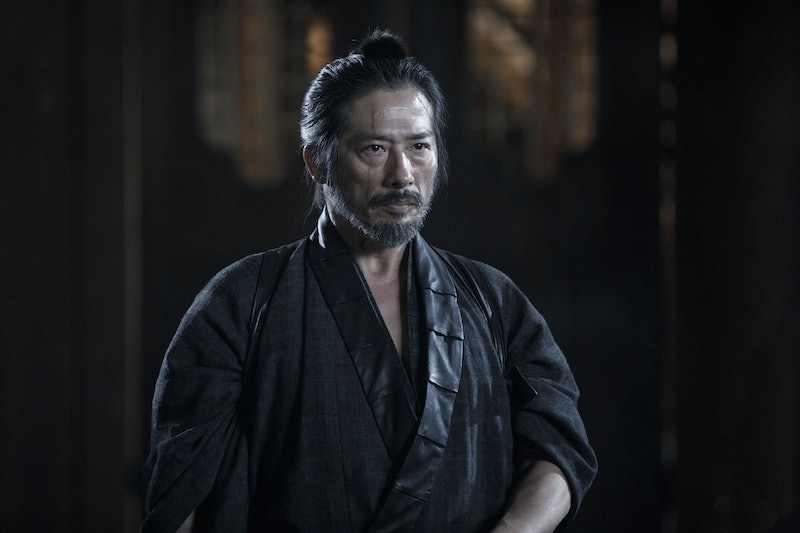 Spoilers ahead for the "Akane No Mai" episode of Westworld. HBO's sci-fi/Western series is introducing a lot of new concepts to viewers in Season 2: drone hosts, mesh networks, human cloning, whatever "the Valley Beyond" is. But what about the icky translucent goo that keeps leaking out of hosts' ears? What is cortical fluid on Westworld, and why is it so important?

The word "cortical" means anything relating to the cerebral cortex, so it makes sense that "cortical fluid" is the name for the gooey liquid that surrounds the hosts' brains — or CPUs if you want to be technical. Viewers got their first glimpse of these "mind-eggs" in the Season 2 premiere, when Antoine Costa performed a beachside autopsy on a Ghost Nation host. Sawing off the dead man's skull, he revealed a round, white device suspended in a pool of fluid, from which the team is able to view the host's memories and all the data it had collected during its operational lifespan.

This is the same liquid that has been leaking from Bernard's ear throughout the season; he injected himself with some replacement cortical fluid while in the secret lab with Charlotte, and had Elsie inject him with some more during last week's episode. For some reason, he seems unable to operate normally without it.

If you're wondering why Bernard appears to be so damaged, it's because Ford forced the host-programmer to shoot himself in the head back in Season 2. Although Maeve stumbled across his body and ordered Felix to patch him up, the tech informed Bernard that it was a temporary fix. If Bernard doesn't keep injecting himself with cortical fluid, he's going to break down completely.

And he's not the only one in need of the precious substance. Once Maeve & Co. enter Shogun World, it quickly becomes apparent that the park's narratives were off their preordained paths. Although the team assumes it's the result of self-awareness and rebellion like the chaos in Westworld, the truth is much more banal: the cortical fluid leaking from the Shogun's ear makes it clear that the host isn't awake… he's just broken.

Regardless of how the Shogun was broken in the first place, it seems clear that this cortical fluid is the hosts' biggest weakness. Now that they can be reprogrammed at will to ignore the effects of things that would be fatal to humans — like bullet wounds and stabbings — it seems like the only thing that can kill them is a lack of the substance that keeps their CPUs from overheating. (Note: this translucent gooey substance is different from the white gooey substance that the hosts appear to be built out of.)

It appears that fans may have found the hosts' hidden Achilles heel. Showrunners Jonathan Nolan and Lisa Joy previously confirmed that their artificial brains "don't require oxygen" to survive — which raises the question of how so many hosts appeared to have drowned in the Season 2 premiere. (Hmm…) But if they don't require oxygen, they definitely do require cortical fluid.

It remains to be seen how this weakness can be exploited, since you'd basically have to crack a host's skull to start leaking away the vital fluid and overheating their CUPs. But it's good to know that there is a weakness, because right now Dolores' host army seems virtually unstoppable. Not even a fully-armed futuristic army could stop them during the battle at Fort Forlorn Hope. But something causes the downfall of the rebellion within the two week timeframe laid out in the premiere. It may not directly involve cortical fluid, but with the amount of emphasis Westworld is putting on the substance this season, it seems clear that it will become important to the plot sometime soon.