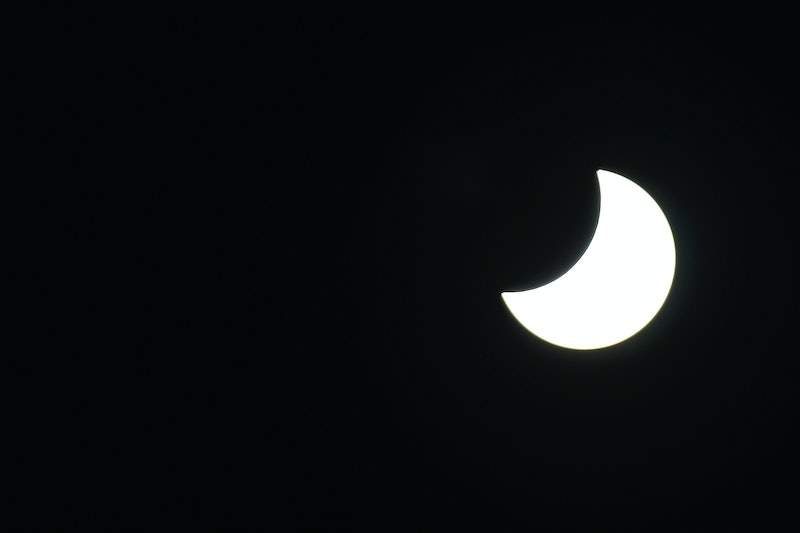 I bet you've never belted out lyrics about a "partial eclipse of the heart" at a karaoke party (sorry, Bonnie Tyler), but I've got news for you: partial eclipses are, in fact, still a thing. And maybe if more people knew about them (the concept is certainly new to me), they too would be featured in hits the likes of Tyler's 1983 jam. You can probably guess what a partial eclipse is based on its name alone, but like all astronomical phenomenon, they have a lot of details attached. For one, how dark is a partial solar eclipse? And how easy will it be for you to see the next one when it rises on Feb. 15? Let me fill you in.

First, a quick refresher on what happens during a total solar eclipse. Per Time and Date, "total solar eclipses occur when the new moon comes between the sun and Earth and casts the darkest part of its shadow, the umbra, on Earth. A full solar eclipse, known as totality, is almost as dark as night." In this phase, the sun, moon, and Earth are in a perfectly straight line, which is why the moon's shadow is cast perfectly to block out light from the sun. Eclipses are named according to their darkest phases. Assuming a solar eclipse is total in any single location — and assuming that you can view the sun being completely covered by the moon from any one spot on Earth — it's called a "total eclipse," even if other people in other places won't see it the same way.

An eclipse that's been deemed partial, according to Time and Date, happens when the moon comes between the sun and the Earth but only partially covers the sun's disk. Because these three celestial bodies aren't perfectly lined up (as in a total eclipse), the moon casts only part of its shadow on Earth. To us, it looks like a lunar Pac-Man rather than a fully darkened orb. As a result, the moon is less dark during a partial eclipse than it is during a total eclipse, so the sky as a whole will be brighter as well.

You'll be able to check this out firsthand during the next partial solar eclipse, which will rise in the sky on Feb. 15, 2018, just two weeks after the Jan. 31 total lunar eclipse, according to EclipseWise. It will be primarily visible in Antarctica and southern South America, and will be at its greatest point of eclipse at 3:51 p.m. EST. As always during any kind of eclipse, the moon at this time will be in a new moon phase, meaning that the sun and moon are in alignment, per Time and Date.

Don't be fooled about the power of the upcoming eclipse simply because of the "partial" modifier. Eclipses are generally believed to carry great spiritual significance, according to Siddha Yoga, and like any other major astronomical event, an eclipse can drastically impact your horoscope for the period during which it occurs — and a partial one is no exception. "A partial solar eclipse is just as potent as a regular full-blast solar eclipse," NYC-based astrologer Lisa Stardust tells Bustle. "Solar eclipses are powerful new moons."

Regardless of your feelings about or belief in astrology, one thing I think we can all agree on is that the light coming from the Feb. 15 partial solar eclipse will certainly be more powerful than that of a more completely eclipses new moon. And while this unique Pac-Man moon will be most visible from just a few locations, everyone will at least have the photos to look forward to.