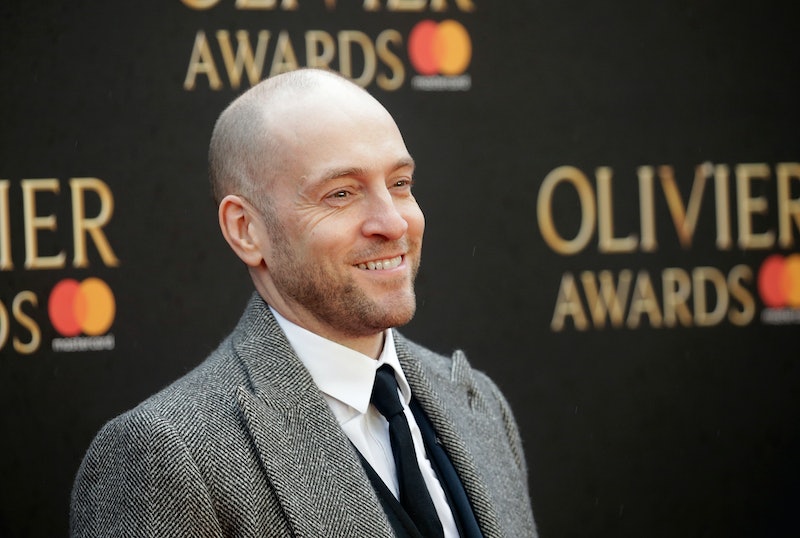 In the new Netflix special, Sacrifice, British illusionist Derren Brown is back to his old tricks — literally. After testing people's ability to believe in God in Netflix's Miracle and before that, seeing if he could convince a member of his audience to commit murder in The Push, Brown again uses the power of suggestion and mental trickery to put a subject to an unbelievable test. In Derren Brown: Sacrifice, he attempts to get a man to sacrifice his life for a stranger. But what Brown does isn't necessarily reserved only for high-stakes Netflix specials. In fact, he wants you to apply his experiments to your own life by stepping outside of the stories you tell yourself.

Speaking over the phone, Brown says, "If you take aside all of the specific content of the show and all of the production values and all of that — which are not things that people are gonna find themselves in in real life — essentially, it is about the power of stepping outside of our narratives, and to me that’s a perpetually important part of living well."

In his new special, Brown puts forth an extreme case of a limited personal narrative. The experiment's subject, Phil, admits to having a bias against Mexican immigrants in the U.S. And Sacrifice isn't just an attempt to convince Phil to sacrifice himself for a random stranger. Brown tries to inspire Phil to sacrifice himself for someone he believes is an undocumented immigrant from Mexico.

"I wanted it to be about a human moment of putting aside the kind of easy narratives that we just sort of absorb and live by," he says.

As Brown explains on the phone, testing someone's willingness to sacrifice themselves for a loved one wouldn't have much of a shock factor to it. But getting someone to jump in front of a bullet to save someone who they consider their enemy? That's the sort of high stakes that Brown was looking for.

"I always try to have a strong dramatic hook," Brown says. Then he adds, "But behind it and throughout it, [I] have a good reason for doing it."

The British mentalist's reason for staging Sacrifice with Phil as the subject has to do with the political discourse surrounding immigration policies, particularly in the US. "I wanted it to resonate in our times so something around the world of immigration and racism — it made sense," Brown says.

Brown sees Phil's racial bias simply as a more pronounced example of the kinds of pre-set stories that people tell themselves everyday in order to make sense of the world. And that's why he thinks that you might be able to use Sacrifice's goal in your own life.

"I think realizing that life’s complex and it’s ambiguous and there are no easy stories ultimately," he says. "That’s a perpetually important thing, particularly nowadays when whatever perspective we do have gets bolstered by the filter bubble in our social media and so on and which means that people that disagree with us, they just move further and further away and they do start to seem like they might just be ‘mad or bad or idiots or evil.'"

In Sacrifice, Brown uses various tactics to mentally prepare Phil for the "final challenge," which is a scenario involving a group of white motorcyclists holding up an undocumented immigrant at gunpoint. Brown first pretends to place a microchip into Phil's neck that will help Phil become more decisive. Then Brown gives Phil an app that will trigger the subject to act boldly (which Brown hopes will motivate Phil to jump in front of the bullet in the climactic test). Most of the science used in the show, as Brown explains, isn't even real but rather a way to show how easily manipulated people can be.

In this case, Brown hopes to manipulate Phil to step outside of his prejudices to save another person, but the show's unspoken moral suggests that anyone can change their beliefs with some mental priming — which include lessons in empathy.

But as much as manipulation plays a part in Brown's professional life, the former magician tells me that he tries not to bring his mentalist skills into his daily interactions.

For someone who has built a public reputation for encouraging people to do unbelievable things, Brown's live-and-let-live philosophy may be surprising. Then again, since Sacrifice is all about releasing one's preconceived ideas about a person based on limited facts and looking deeper. Brown just wants you to turn that focus on yourself.