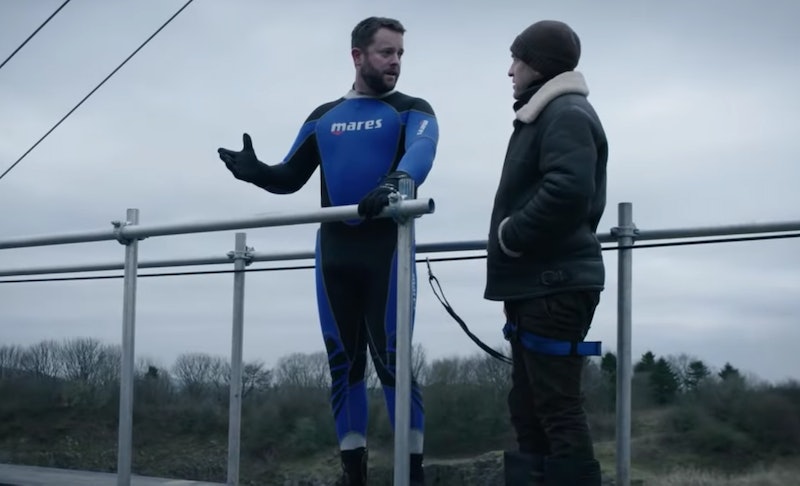 Illusionist Derren Brown has shocked Netflix viewers before with his specials The Push and Miracles, and now he's at it again with a new one called Sacrifice. In this special, Brown challenges the limits of entertainment more than ever before, as he attempts to manipulate someone into jumping in front of a bullet to save another person. It sounds like an extreme premise, but then again, that's Brown's specialty. Still, it's only reasonable to question the authenticity of the mentalist's hijinks, so how real is Sacrifice? The new Netflix special, which comes out on Oct. 19, seems pretty legit, and Brown has assured the press that it's all real.

In an interview with Metro, Brown explained that his trick had to be real in order to have its full effect. The mentalist said, "The drama and interest comes from that real person going through a real life situation. Magic or mind-reading tricks that I used to do, ultimately the subtext is, ‘Look how clever I am.'" Even though the Netflix specials Brown creates aren't exactly everyday entertainment, they definitely resonate with viewers and Sacrifice is deeply grounded in reality despite its unusual premise.

You didn't think that Brown would simply have a man save a random bystander from a hurling bullet, did you? That would be too easy. Instead, Brown tested his subject, Phil's, racial biases by using mental-manipulation. Hey, if you're gonna manipulate a person's thought patterns and beliefs, you may as well use that power for good.

Brown set out to find his subject for Sacrifice by testing people's levels of suggestibility and implicit biases, the mentalist told The Wrap. That testing led him to Phil, who, throughout the special, seems to have no qualms with voicing his racist opinions about Mexican-Americans. It gets uncomfortable at times, but Phil's beliefs about immigrants from Mexico also hearken back to Donald Trump's statements about Mexican immigrants during his presidential campaign. As sad as that is, it's the reality that Americans face right now, and Sacrifice tackles one of the most prominent racial divides in the country head-on.

If you're turned off of the whole premise of Sacrifice because you don't need to hear anymore ignorant ideas being discussed on TV, you still might want to at least give it a chance. Phil, the subject of Sacrifice isn't necessarily a person who's actively trying to harm anyone else, though his racial bias is still hugely problematic. His biases come from unfounded fears. As Brown told Metro, "[Phil] is a very likable person, and like a lot of people just a guy struggling with aspects of his own financial and living situation."

It seems that the events that take place in Sacrifice are all real — according to Brown, at least — but the more important question actually might be: is it all too real? It's up to you to decide.