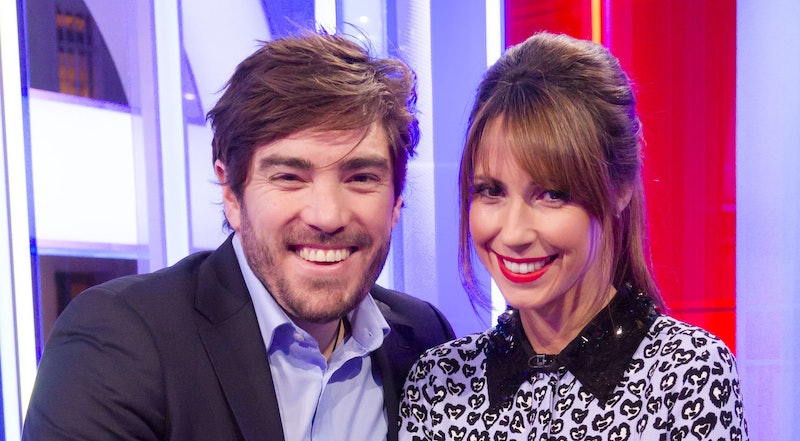 TV's Alex Jones is best known for her presenting gigs on BBC's The One Show, Sport Relief, and her 2011 stint on the reality-competition series, Strictly Come Dancing — where she finished in a very respectable fifth place. Earlier this year, the television host welcomed her second child with husband Charlie Thomson, but what else is there to know about the couple? And how did Alex Jones and Charlie Thomson meet? Well, I've done some digging, and here's everything you need to know.

According to The Sun, Jones and Thomson first met at a party in 2011, and four years later, the couple were engaged. The pair eventually tied the knot in December 2015 — ten months after first announcing their engagement, and the private wedding ceremony took place on New Year's Eve at Cardiff Castle in Wales. Unlike his famous wife, Thomson reportedly works outside of the spotlight as an insurance broker, and is originally from New Zealand.

According to OK!, the couple welcomed their first child, Edward Alun Burrell Thomson, back in January 2017 — and the good news was first revealed during a live phone call on The One Show. As reported by the BBC, the Jones-Thomson clan grew further in May 2019 after the TV host gave birth to her second child, Kit. In a statement following Kit's birth, the Strictly star said, "We are now a family of four. People said it was going to be busy with two [children] and they weren't joking. He's doing really well. He was born last Monday morning so we've had a lovely week, just the four of us, getting used to being a family of four." In the statement, Jones went on to say, "I was really worried about introducing him to Teddy but he has taken to being a big brother like a duck to water. He's really gentle with him."

According to Hello!, Jones gave birth to her second child at the Queen Charlotte Hospital in London, and in an Instagram post The One Show host gave thanks to the "NHS heroes" who helped deliver baby Kit. In the social media post, Jones said "Teddy, Charlie and I are absolutely besotted by baby brother and are enjoying this special time as we get used to being a foursome and generally breathing in that lovely newborn smell!!! A huge thank you to the midwives at the birth centre, Queen Charlotte Hospital for everything you did for us. #nhsheroes"

Although seemingly basking in motherhood, Jones has previously revealed the anxieties she faces as a mother of two young children. According to The Sun, the TV presenter made the revelation during an appearance on the I See What You're Saying podcast. Speaking on the podcast, she said, "Everybody has nerves about being a mum and being a parent. Pregnancy for any woman is a period of excitement, but also slightly terrifying as you don't know what to expect. Even with your second it's like: 'How am I going to do two?'"

Although a TV star, it seems that Jones has shared the same experience as many other new mums, and good for her for opening up about them.