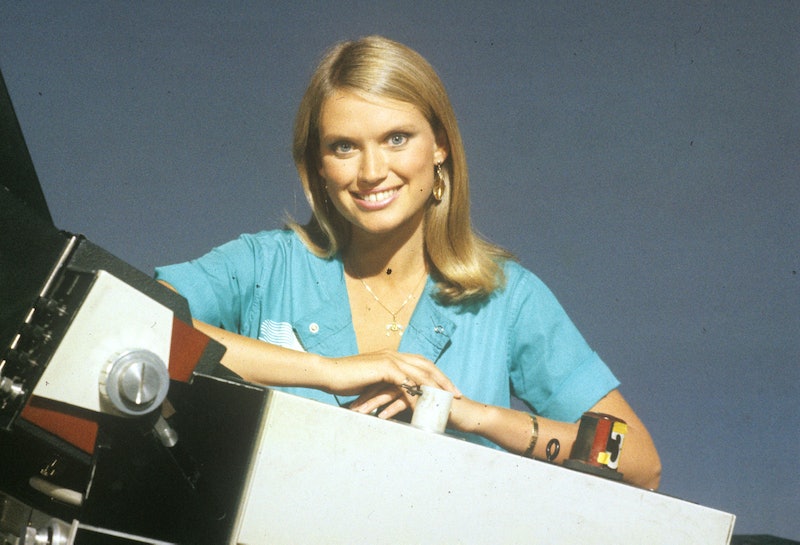 It's that time of year when a load of excellent shows are wrapping up. When annual TV events end and there feels like an eternity before your next excuse not to socialise begins. And one in particular is, I swear down, 80 percent about the build up and speculation. I can almost hear the rustle of sequins and smell the dangerously flammable hairspray. Yep, Strictly. Well guess what guys; Strictly Come Dancing's 2019 line up rumours are suggesting this season might be bringing someone all too familiar with a challenge. Members of the audience, I give you Anneka Rice.

OMG what the hecking eff? No this is not a drill, and yes I am also hoping for never before seen amazing bedazzled jumpsuits.

So The Sun are reporting that the star, who became a household name as a jumpsuit-wearing "skyrunner" on Channel 4’s Treasure Hunt in the '80s, is set to star in the next season of the dancing show. Rice, who is probably best known by fans for her TV show Challenge Anneka, is bringing some serious star power to the show. OMG is not even the word to address this potential add to the contestants this year. And it is TBC if she will be arriving to the stage in a helicopter every week. Dare to dream. Bustle reached out to Rice's agent for comment, and will update this story if we hear back.

Rice has been away from the limelight since she famously took a step back from showbiz in 1995 to become a mum. She did however star in a few TV specials in 2006 and 2007, giving just enough for fans to be dying for more. Well you guys, this might well be the chance to see her take on her biggest challenge yet.

The Daily Mail reports that Rice appeared last month on Lorraine to celebrate 40 years since she began working in the entertainment industry. While appearing on the show she revealed to Lorraine that after taking a break she was dropped by her agent. And did she let that get her down? Hell no. She just made up an agent and pretended to be said agent.

"My agent sacked me and I just thought this was ridiculous, who can I find? Then I just found this person who was so efficient, she was fun to deal with, everyone loved her and it was me."

I mean, guys that is not only hilarious but also kind of lit. Hats off to her really. She also revealed that she turned down the opportunity to be a Bond girl. Because she wanted to be more in on the action. As opposed to a sideline in a sex scene.

"I was such a feminist, I don't want to have sex with James Bond, sorry. I'm very happy to hang out of a helicopter and kill some people, have a gun, abseil down…"

So who will this potential contestant be shaking her tail feather against this season? The Radio Times are reporting that other rumoured contestants include Jamie Laing, Michelle Visage (!), Alex Scott, and Jodie Comer.