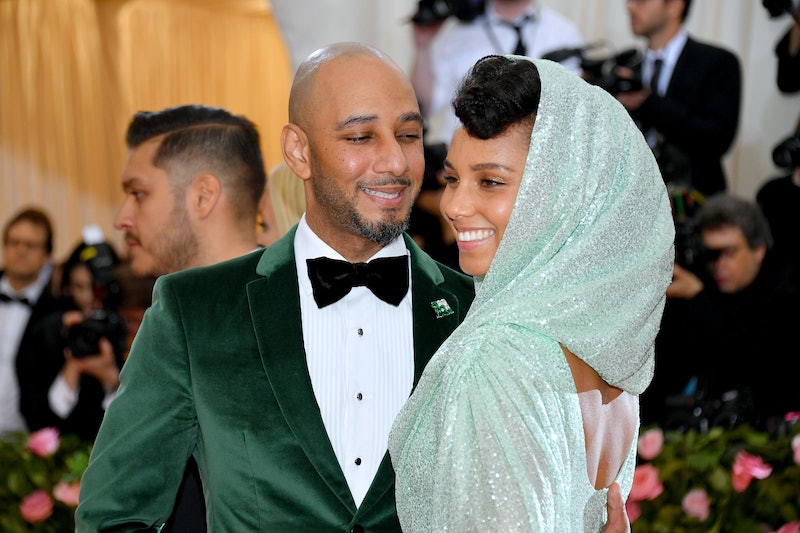 Though many Hollywood love stories start on-set or in the studio, Alicia Keys and Swizz Beatz actually met when they were still teenagers. As Keys explained to Wendy Williams in 2013, a mutual friend introduced her to Beatz while they were both growing up in New York City and working on music. But unfortunately, Keys' first impression of her now-husband wasn't great.

"Honestly, I didn't really like him that much. I thought he was too ostentatious," Keys told Marie Claire UK the same year. "Everything with him is really over the top. I used to see him and think, 'He is so annoying.'"

She was equally reluctant about getting in the studio with Beatz, saying she fought "tooth and nail," but once they did, they "had a ball," and eventually romance blossomed. "He really got me when I saw how far his mind went," Keys told Williams. "He's really, really intelligent and knows so many interesting things ... he knew all this stuff I had no idea about. I think that he loves to live life and he really showed me how to live life in a beautiful way."

There were, of course, some bumps along the way. Around the time Keys and Beatz started dating, he was separated from his first wife Mashonda Tifrere, who he'd married in 2004. In 2009, Tifrere posted a lengthy letter on Twitter claiming that Keys and Beatz had been having an affair. Keys later pushed back against her accusations, telling Jet magazine that Beatz and Tifrere had been "apart for some time" before she and him got together. But they seem to have resolved their issues: Tifrere's 2018 novel, Blend: The Secret to Co-Parenting and Creating a Balanced Family, includes a foreword written by Keys and a chapter from Beatz.

"Time has a way of healing things, but we also had to heal ourselves," Tifrere told People of the book. "I'm using my own story as a testimony. It's my divine purpose."

Cut to today, and Beatz and Keys have been married for nearly 10 years. They share two children together — 9-year-old Egypt and 5-year-old Genesis — as well as co-parent Beatz's previous three children, 19-year-old Nasir, 13-year-old Kasseem Jr., and 11-year-old Nicole.

"I'd never met a person where I could be fully myself," Keys told Jet of her husband. "Swizz and I live in each other's shadow. So we can occupy the same space and there is nothing but equality. There's something really powerful about that."

More like this
Kanye West Apologizes To Kim K "For Any Stress I Have Caused" In Rare Interview
By Jake Viswanath
Adam Levine Denies Having An Affair — But Admits He “Crossed The Line”
By Jake Viswanath and Radhika Menon
Everything To Know About Taylor Swift’s 10th Studio Album, 'Midnights'
By Grace Wehniainen and Jake Viswanath
Beyoncé’s Special Tribute To Sister Solange Was Both Touching & Hilarious
By Stephanie Topacio Long
Get Even More From Bustle — Sign Up For The Newsletter

This article was originally published on Dec. 29, 2014