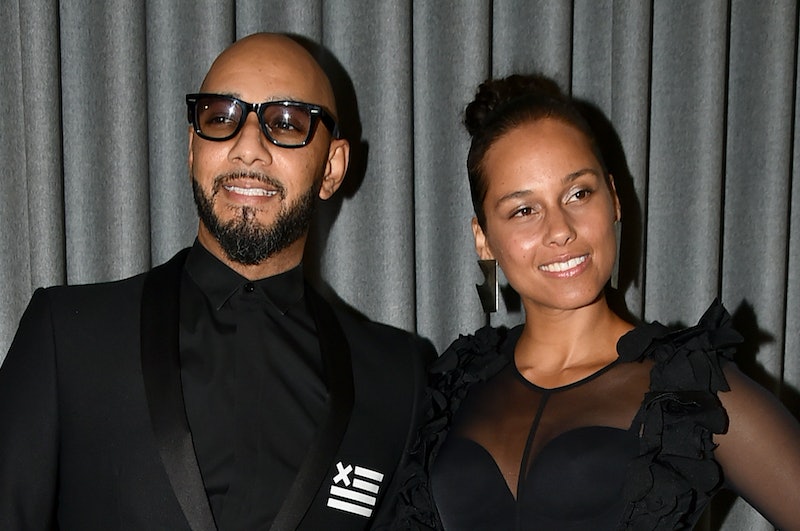 In addition to being a 15-time time Grammy winner and the host of this year's Grammy Awards on Feb. 10, Alicia Keys is also a mom. She and her husband, Swizz Beatz, have two sons together: Egypt Daoud, 8, and Genesis Ali, 4, and she also co-parents Swizz Beatz's kids from his previous marriage, Prince, 18 years old, Kasseem Jr., 12 years old, and Nicole, 10 years old. In all, Alicia Keys' kids are super adorable, and she posts about how much she adores them all the time on Instagram. They're pretty funny, too.

This is Keys's first year hosting the Grammys, which is a big deal for any artist offered the position. But as for little Egy and Gen, as Keys affectionately calls them on her Instagram, the little ones weren't quite so impressed by Mom's new gig. Keys posted a video to her Instagram on Jan. 15, showing the moment when she told her sons that she would be hosting the Grammys. The boys are happily playing in the kitchen when Keys gives them the good news. You can practically hear a Lego drop in the long silence that follows.

Egypt patiently waits for the punchline, and when it doesn't arrive, his question — "What's the Grammys?" — says it all. You'd think that maybe he would have seen a dozen or so of the golden gramophones lying around the house. But then again, what 8-year-old actually cares about things like that anyway?

Keys and her husband are very open about their family and they appeared on Good Morning America with Mashonda Tifrere, Kaseem Jr.'s mother, late last year. The three talked about how they've learned to make their family work and what it's like to be successful co-parents to help promote Tifrere's book, Blend, which talks about their difficult journey to creating a happy, healthy blended family together. "We love each other. I mean, we hang out with each other. We go to dinner together," Keys said, referring to her husband and Mashonda.

"We're doing Thanksgiving, we're doing the holidays [together]," continued Keys. "It is a beautiful partnership. And that is really, really special. I'm very, very proud of that. It's a real thing and it's possible."

Tifrere and Swizz were technically still married in 2008 when Keys first started dating him which the media was quick to comment on, according to MTV.com. But according to the producer, it was all made up drama. He said, "My divorce, it ain't nothing bad. It's just us moving on. Me and Shonda are super good. It is what it is. [The press] are nine months late on the situation. It's a headache to me. We been separated nine or 10 months already."

Being under that kind of scrutiny has to be tough for everyone involved, but it looks like they've made it through the rough patches. Keys has even used her music to talk about the struggles they've all overcome, notably with her 2016 single "Blended Family." Talking to BET, Tifrere said the song "is a true testament of love, growth and healing."

So, maybe little Egy and Gen don't have any idea what the Grammys are, but there's no doubt they've got a lot of loving, positive influences around them to help fill in the blanks. And if they play their cards right, maybe they'll even get to stay up past their bedtime to watch.