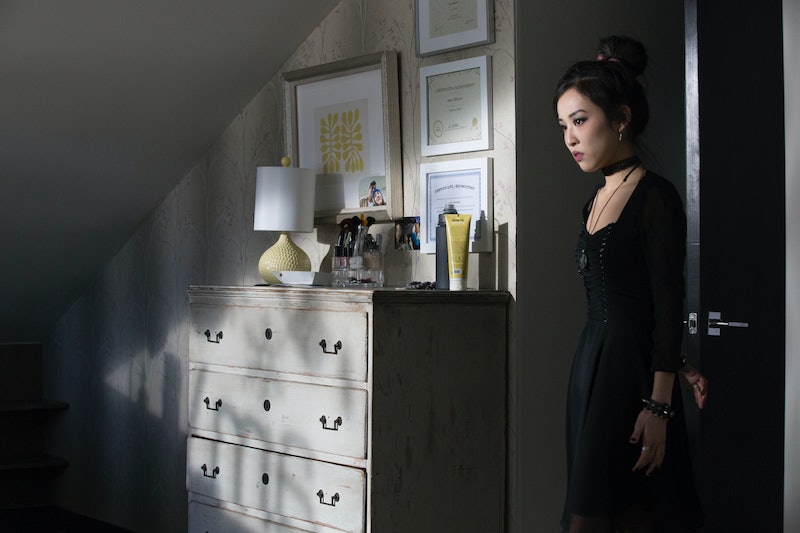 Fans of the Runaways comic noticed a few major changes to the canon in the Hulu adaptation — namely the addition of a new member of the team who adds to the mystery in a major way. But how did Nico's sister Amy die on Runaways? Her death is the reason the group broke up in the first place.

In the pilot, the Runaways are still grieving the loss of their friend. It's actually not known yet how she died. We don't have a concrete idea of what they were told happened to Amy, much less what really happened to Amy. So what do fans know about her death? It happened on the night of a Pride meeting. That's already suspicious. Her death is probably connected to Gibborim, or the Pride and all the evil nonsense the parents are up to in some way.

“Nico is connecting the same thoughts that you are," said executive producer Stephanie Savage in an interview with Entertainment Weekly. "Like, ‘Is this coincidence or what?'”

Nico definitely thinks her parents are behind it, and probably has for a while. “When Amy passed," actor Lyrica Okano, who plays Nico, said in the same EW interview, "Tina and Robert grew distant from her. She was like, ‘You know what, I’m okay with that. I’m pretty sure you guys had something to do with it anyway. You guys aren’t telling me something, and I’m just going to have to figure it out on my own.’ Obviously, Tina and Robert both know something, and Nico has no idea, but definitely it ties in with the bigger picture of The Pride. Viewers will get answers, but Nico never does.”

Was she sacrificed like Destiny, the runaway that the parents recruited into the church and then killed in the pilot episode? It's wild to think that Tina and Robert would do that to their own child, but you never know. Maybe Amy learned the truth about her parents. Maybe she tried to run away from home, and there was some kind of confusion. Were Molly's parents also killed by the Pride? There isn't a single detail in these characters' pasts that isn't important.

There's also the fact that Nico's parents seem to be a little distant from each other in the aftermath of their daughter's death as well. Maybe one of them was more involved than the other, and the friend group isn't the only rift that's happened because of Amy.

What was Amy like in life, then? All the kids in Runaways fit into perfect little John Hughes Breakfast Club stereotypes. From the photos in Nico's house, it looks like she was into sports. We know from Alex that she likes video games. Now that Nico has her diary, fans can learn more about her late sister's life and the group can use that information to start figuring things out.

How and why Amy died is clearly important to the series. “The impetus for the Amy story is really about the emotional connection of these characters, these kids,” executive producer Josh Schwartz said in yet again the same EW interview. “We felt like Amy’s death is really going to be driving a big part of the emotional side of the story for a while.”

Based on the first three episodes of Runaways, viewers don't even know the "official" story for how Amy died. What are her parents telling the authorities? Was it a car crash? Chemical accident? Overdose? If the Pride was involved, there has to have been some kind of cover-up. And taking those questions farther, what if Amy isn't even dead?