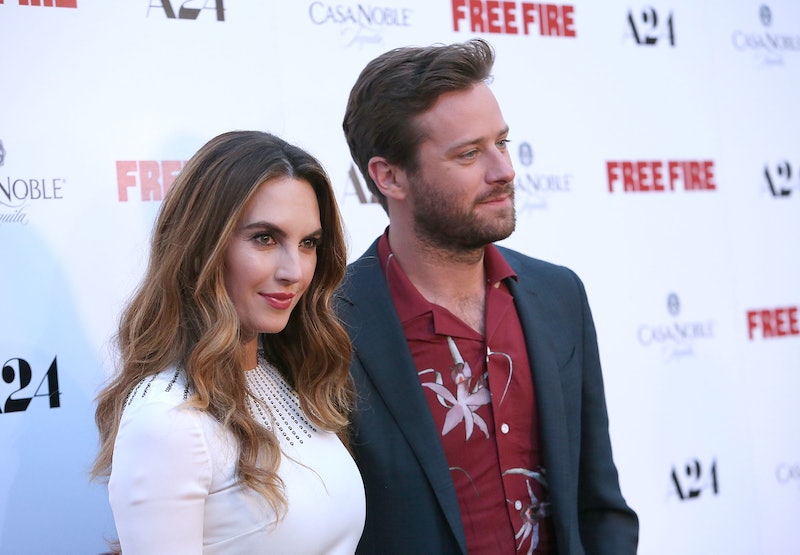 If you're watching the 2018 Golden Globes on Sunday, Jan. 7 you can expect to see Armie Hammer's wife, Elizabeth Chambers, somewhere in the audience. The two have been married almost eight years now, so it would be no surprise to see her standing by the nominated actor's side. But those unfamiliar with his personal life may wonder: How did Armie Hammer and Elizabeth Chambers meet, anyway?

Having been together nearly a decade, the couple may seem unshakeable by now, but their relationship didn't start off on such solid footing. Though Hammer once described their first meeting as "love at first sight" to Momtastic, Chambers actually had a boyfriend at the time, and it took Hammer several years to woo her away. According to an interview he did with Vulture in November, back in 2006, a mutual friend invited Chambers to an "adventure day" Hammer had planned with friends in Los Angeles that included multiple museum trips and a journey to a hidden gun range. Chambers insisted on driving, and when she arrived to pick them up, Hammer told the outlet he "felt like he'd been knocked over.” After that, they became friends, but eventually there came a point where Hammer couldn't stifle his feelings any longer, and he asked her to break up with her boyfriend to be with him. As he continued to Vulture:

"Our friendship continued to grow and grow until one day when I was like, ‘I can’t be friends with you anymore. You’ve got to break up with your boyfriend, and we’ve got to start dating.'"

"When we finally got together, Armie really wanted to get married. He sat me down and said, 'Look, we don't have to do this. We could just go our own ways, and then one day you'll be 40 and divorced and we'll run into each other, and we'll laugh and go out to dinner and have this same connection, and we'll wonder why we wasted all of that time. Or we could just do it now and enjoy the ride.'"

Today, they share two children: a daughter named Harper, who is three, and a son named Ford, who turns one later this month. In 2012, they opened Bird Bakery in San Antonio, which Chambers runs day to day. (She previously dabbled in acting, and has worked as a TV host for the E! News Bureau and Access Hollywood, an anchor for Current TV, and the chief correspondent for the Human Rights Foundation, among other networks.)

In all of these years, Hammer told Vulture that he's never run into the man he stole Chambers away from, but that he'd like to, if only to apologize. "At this point now, in my life and how far I’ve kind of come, I would honestly just be like, ‘I’m really sorry, dude. I know that probably really f*cking sucked. I know that you were upset and I totally get why, so I’m sorry," he told Vulture in the same interview.

But it certainly doesn't seem like he regrets it. Ten years later, he and Chambers sound (and look) like they're just as in love as ever. When asked by Us Weekly what he loves most about his wife, Hammer said, "everything. That's the easy answer," while Chambers returned the sentiment. "I love him so much. Every time I look at him it makes me so happy," she told the outlet.

Now, Hammer recognizes that this perhaps wasn't the best way to start a relationship, but apparently, his chemistry with his future wife was unstoppable. Hopefully the other man in Chambers' life has since come to accept that, and is just as happy with a partner of his own.

More like this
At 28, Lesley Manville Was Acting, Picketing, & Singing Kate Bush Songs
By Olivia-Anne Cleary
Here’s Everything Coming To & Leaving Netflix In August
By Jake Viswanath
Kourtney Kardashian Shares New Photos From Her & Travis' Courthouse Wedding
By Bustle Editors
'A League Of Their Own' Star Abbi Jacobson Is Engaged To Jodi Balfour
By Jake Viswanath
Get Even More From Bustle — Sign Up For The Newsletter