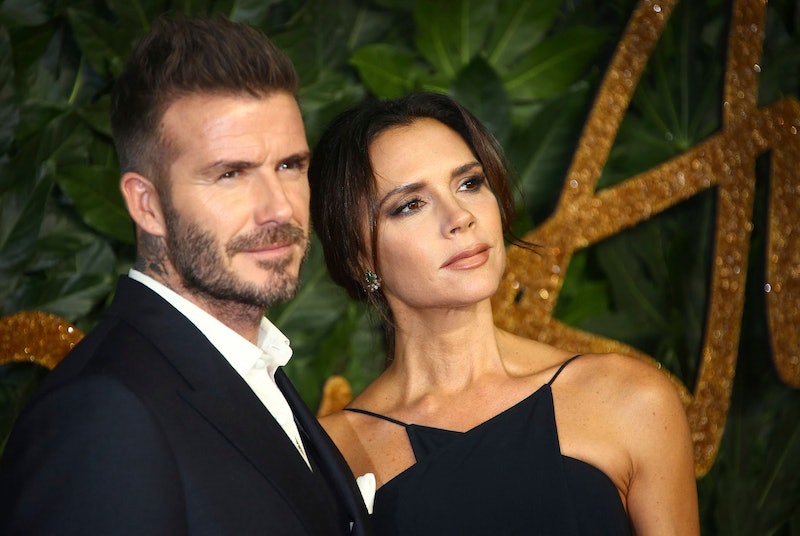 In a world where celebrity divorces are the norm, David and Victoria Beckham continue to defy the odds with their near 20-year strong marriage. Throughout their relationship, the football icon and former Spice Girl have gone on to have four children together, and both continue to prosper in the spor and fashion industries. But how did David and Victoria Beckham meet?

According to InStyle, it was a case of love at first sight for the famous duo, and after meeting in 1997, the Beckham's quickly announced their engagement at a press conference in January 1998 — after David reportedly proposed during a romantic dinner. In the October 2016 issue of British Vogue, Victoria outlined the "hazy" first encounter with her husband-to-be in a letter she wrote to her 18 year-old self. In the published letter, Victoria revealed "And yes, love at first sight does exist. It will happen to you in the Manchester United players’ lounge —although you will get a little drunk, so exact details are hazy."

Beckham then continued to recall how David's affection for his family is what initially caught her attention. She wrote, "While the other football players stand at the bar drinking with their mates, you will see David standing aside with his family. (He’s not even in the first team at this stage — you are the famous one). And he has such a cute smile. You, too, are close to your family, and you will think how similar he feels to you. He’s going to ask for your number. (He still has the London-to-Manchester plane ticket on which you wrote it)."

As reported by InStyle, the fashion designer went on to reveal that her first few days with Beckham with kept top secret, after being advised to keep things low-key by her manager at the time, Simon Fuller. In her letter, Victoria continued "You are going to be very, very famous, both for the band you form and because of the man you marry, and then later for a fashion businesses you will launch in your own name." However, Victoria isn't the only one to have recounted their first meeting, because according to The Sun, husband David has also previously said "My wife picked me out of a soccer sticker book. And I chose her off the telly. It felt straight away like we'd always been meant to be together."

The couple tied the knot in June 1999, shortly after welcoming their first child, Brooklyn, reports Harpers Bazaar. The lavish wedding ceremony took place at Luttrellstown Castle near Dublin, where Victoria walked down the aisle in a Vera Wang gown, and a gold crown designed by Slim Barrett. At the time, the Beckham wedding was the biggest showbiz event of the year, and the couple made the most of the exposure, because according to the Guardian, the newlyweds sold their wedding photos to OK! magazine for a staggering £1.4 million. The Beckham love story truly is a modern-day fairytale, and I, for one, hope their relationship continues to prosper in the sometimes cynical world of celebrity.