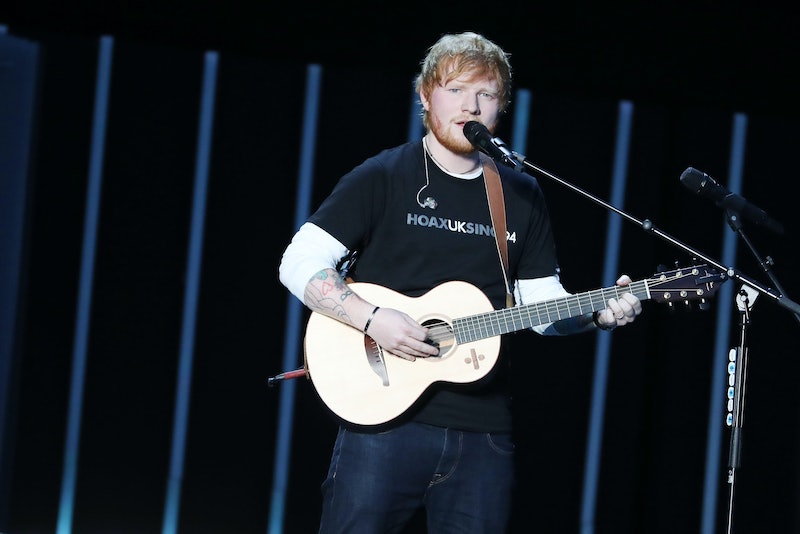 There are some songs that you can't escape, even if you were to fly off to an island and isolate yourself completely, you'd probably still be able to hear the ringing of 'Shape Of You' by Ed Sheeran in the distance. These are the songs that follow us everywhere. Played on seemingly every radio station, in every bar, on every TV advert. But sometimes, the best songs really are the ones that people play the most. So, now that the most played songs and artists of 2018 have been revealed, it's an eye opening insight into what the nation loves listening to, or trying to escape from.

On Monday, the BBC put forward data which had been compiled by music royalty body PPL, to reveal who and what the UK listens to most. I reckon you can probably guess who's got themselves that top spot. It's only the world's most famous ginger — Ed Sheeran — who, as the BBC reports, scored a hat-trick, having found himself topping the list of most listened to artists in the UK for three years in a row. Mind, Sheeran didn't even release music in 2018, which makes his dominance even more impressive.

Following just behind Sheeran in the list is mega-star DJ Calvin Harris, who in 2018, was still reeling from the success of his 2017 album Funk Wav. Bounces Vol.1, but it might have been his massive 2018 hit One Kiss with Dua Lipa, which secured his second place spot. Little Mix took third place, and with such an ardent fanbase, it's no surprise. The group enjoyed a very successful 2018, with the release of their fourth album LM5, which featured a very high profile cameo from Nicki Minaj.

Rita Ora follows them, who had quite the comeback year in 2018. After taking a six year musical hiatus, the singer and former The Voice judge released the aptly titled Phoenix, her first album in six years. Taking fifth place is Coldplay, who are certainly no stranger to the UK charts. While there wasn't so much as new music from one of Britain's best-loved bands, their Live In Buenos Album, as well as their tour documentary film, surely reignited the nation's love for them.

P!NK is the first transatlantic artist to make 2018's list, as she finds herself in the sixth place spot, as her 2017 album Beautiful Trauma was still enjoying plenty of radio play, owing to the album's longevity. The more up-and-coming artists, who are still in the infancy of their careers find themselves in the second half of the list, as Clean Bandit take seventh place, Dua Lipa eighth, George Ezra ninth, and Jess Glynne tenth.

Interestingly, there's a bit of a crossover between the most played artists and songs, but not much. The most played song comes from the relatively unknown group Portugal. The Man, who released 2018's unescapable hit 'Feel It Still.' Rudimental's 'These Days' takes second place, as it features a smorgasbord of talent, including Jess, Glynne, Macklemore, and Dan Caplen.

Taken from the Fifty Shades Freed soundtrack, Liam Payne and Rita Ora's saucy duet 'For You' takes third spot, while Calvin Harris' and Dua Lipa's 'One Kiss' finds itself at fourth. Fifth is George Ezra's infectious 'Shotgun,' sixth place goes to goes to 'Lullaby' by Sigala & Paloma Faith, while Rita Ora features again, with her hit 'Anywhere' taking seventh place. Eighth goes to David Guetta & Sia's 'Flames,' as Ezra finds himself in the list again with 'Paradise' at ninth, with P!NK's 'What About Us' concluding the list at tenth.