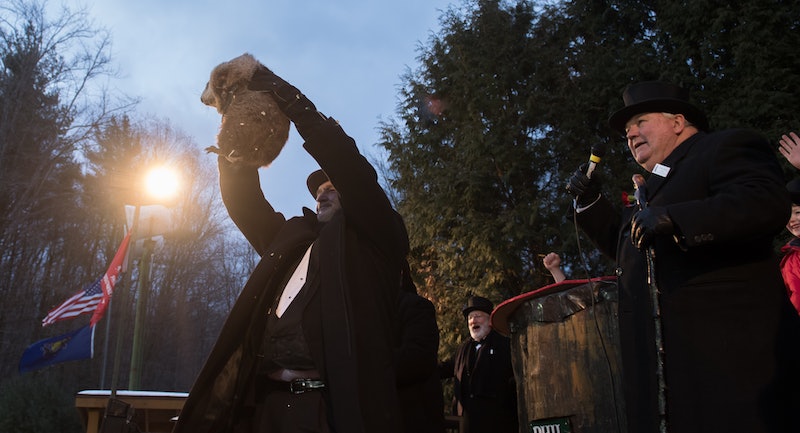 You may or may not be surprised to learn that the real way Groundhog Day got its start has nothing to do with groundhogs or even us here in the states. Like many traditions that we observe here in America, it came all the way from Europe and was considered to be an ancient Christian celebration.

While for us, Groundhog Day is most notably a cute-but-frustrating movie staring Bill Murray and a day when a man dresses up like someone from one of Charles Dickens' novels only to hold up rodent for the media, the holiday actually has somewhat significant ancient roots.

According to the National Environment Centers for Environmental Information, the OG Groundhog Day was originally derived from Candlemas Day, a celebration that marked the end of a 40-day purification process post-Christmas that would render Mary virginal again. On this day, the clergy would round up candles, bless them and give them to the people. Then, when the clergy realized that the day lay smack dab in the middle of the winter solstice and the spring equinox, they expanded the reach of the celebration. It was no longer about Mary's post-birth spiritual cleanse, all of a sudden it was about the weather. From then on, they'd take note of the weather — if it was cloudy and cold, they'd come to expect six more weeks of winter, but if it was sunny and clear, they'd believe spring was on its way.

And while talking about the weather at all is a conversational faux pas in modern-day America, back then, the weather dictated their lives. It influenced their crops, it stabilized their livestock, and it affected their shelter. So, if there was anything they could do to help figure out how much more cold they had in front of them, they had to consider it. Without the weather app on their iPhones (and without iPhones), farmers had to do whatever they could to predict the forecast. Their lives depended on it.

Once this ritual made its way to Germany, they swapped out the candles and brought in a badger — yes that's right, the original groundhog wasn't a groundhog at all. The Germans would hold out a badger and look for its shadow, if there was none, they'd prepare for a longer winter, and if there was a shadow, they'd get ready for spring.

Why put the fate of the seasons in the hands of a rodent at all? Fair question. Back then, people put a lot of faith into the knowledge of animals. Nearly all civilizations looked up to different species for different understandings. In Germany, the badger was a big part of their agricultural awareness, so they looked to the badger to predict the fate of their farms.

When the Germans moved to Pennsylvania in the late 1800s, they couldn't find badgers. But what they could find were groundhogs. So the animals were swapped out and the tradition was extended. Seeing as we have highly skilled and knowledgable meteorologists now, we should probably let the groundhog retire, alas, some traditions carry on far beyond their original intentions. For many, Groundhog Day is a nice opportunity to think about our history, how far we've come and how much cuter groundhogs are when they're fluffy and on TV and not ruining your backyard.