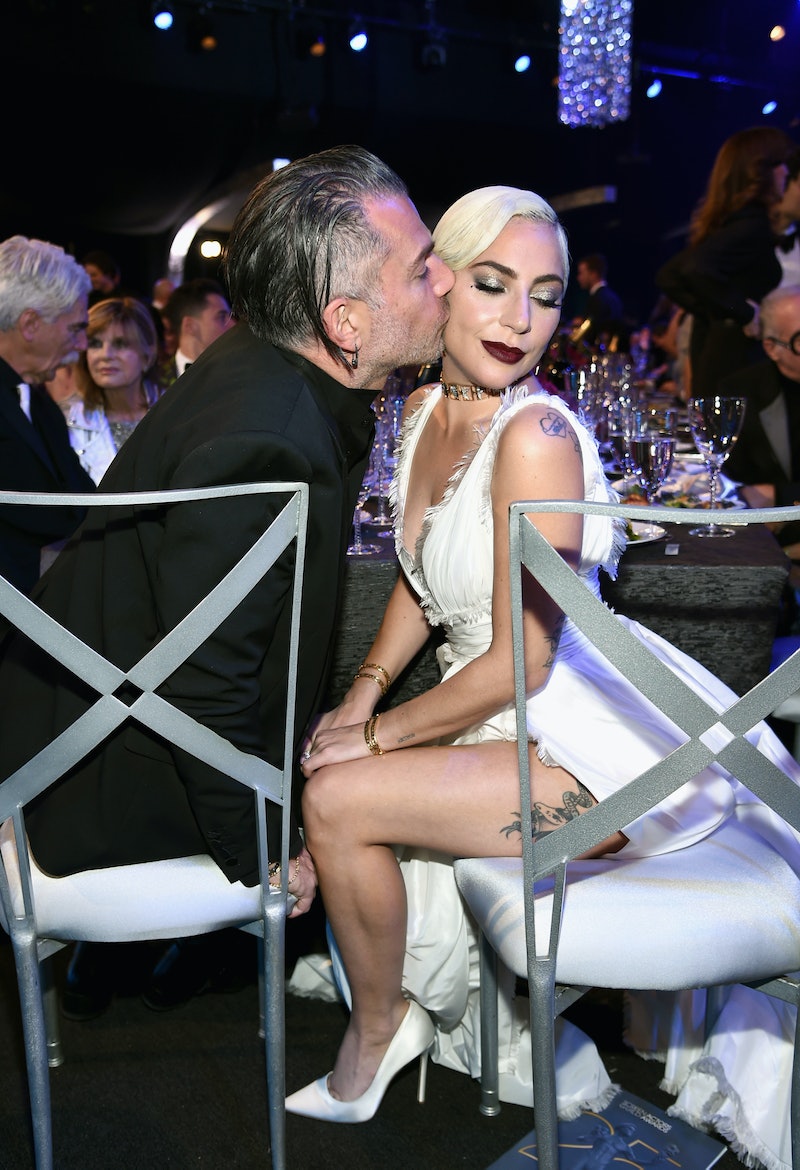 Lady Gaga may be leaning on Bradley Cooper during awards season, as the two are honored for their work together on A Star Is Born, but at the end of the day, there's only one man who Gaga calls her own — her fiancé Christian Carino. Although it's not known exactly how Gaga and Carino met, he was first linked to the singer back in early 2017. And while they keep their relationship relatively private, that in no way makes it a "Bad Romance."

As talent agent at the Creative Artists Agency, Carino has played a role in the careers of numerous celebrities over the years including, but not limited to, Miley Cyrus, Justin Bieber, and Jennifer Lopez, according to AOL. This has led many to wonder if his links to Hollywood are how he became connected to Mother Monster in the first place, though that has yet to be confirmed.

Rumors of their relationship began after the low-key couple was first spotted together at a Kings of Leon concert in January 2017, according to Just Jared. The "Shallow" singer was then caught kissing Carino on the cheek ahead of her show-topping halftime performance during Super Bowl LI, and the two were then spotted sharing a passionate kiss while out on a date night in West Hollywood. The romantic escapade was captured by paparazzi, leading to E! News' confirmation that the two were indeed a couple.

Months then went by with little to no sightings of the quiet pair before Gaga gushed about being "in love" when she told the crowd at the Citi Field stop of her Joanne World Tour that "the best part about being in love with someone is having them there to catch you if you fall," according to Page Six.

Fast forward to November 2017 when Us Weekly broke the news that Gaga and Carino became engaged, a fact that neither acknowledged until Gaga finally confirmed it in October 2018 while attending the Elle Women in Hollywood event, where she reportedly thanked her manager and her “fiancé, Christian,” as well as “all the loved ones in my life who take care of me every day," in her speech.

With the news confirmed — and no official wedding plans set — Gaga and Carino have been openly displaying their romance for all to see, attending award shows and other glamorous events hand-in-hand together. And with award season continuing, he'll likely be by Gaga's side at the upcoming Grammys and Oscars.

As a brief recap, Gaga was previously engaged to her longtime boyfriend Taylor Kinney before news of the pair’s split broke in July 2016, while Carino was previously linked to The Walking Dead actor Lauren Cohan, according to People. Gaga superfans were also quick to notice that Carino already took a step to make their relationship more permanent with a tattoo resembling Gaga appeared on his bicep.

Whenever the happy couple does decide to tie the knot and share the rest of their lives together, it can certainly be said that both Gaga and Carino have a "Million Reasons" to fall in love with each other over and over again.

More like this
What Is Ariana Grande's Net Worth? When It Comes To Money, She Has No “Problem”
By Hugh McIntyre
Lady Gaga Delivered A Million-Dollar Performance At A Private Wedding
By Maxine Harrison
Photos Of The 'Elvis' Cast vs. Their IRL Counterparts Will Have You All Shook Up
By Grace Wehniainen
Chrishell Stause & G Flip Have “No Rules Or Regulations” In Their Relationship
By Brad Witter
Get Even More From Bustle — Sign Up For The Newsletter