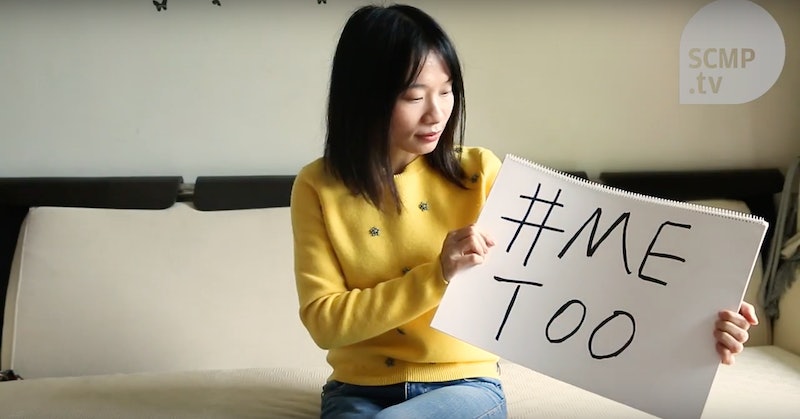 The #MeToo movement, in which women have bravely come forward to tell their stories of sexual abuse and harassment, has dominated conversation in the United States and much of Europe in recent months. The movement has been slower to catch on in China, though, where social and political movements are often suppressed. However, the tide is slowly beginning to turn, as some women in China are launching their own #MeToo movement, called #WoYeShi, and making history with their activism.

As The Guardian reported on Tuesday, China's authoritarian government — and the censorship that comes along with it — has unfortunately somewhat hampered the ability of the #MeToo movement to gain traction in China, despite sexual misconduct being a widespread problem. Indeed, as the South China Morning Post reported, a 2015 survey of over 65,000 men and 62,000 women revealed that 66 percent of men and 80 percent of women reported that they had been sexually harassed. Moreover, around 50 percent of the women and 25 percent of the men surveyed had never told anyone they had been harassed, with even fewer (in the single digits) reporting the incidents to police.

Moreover, activists have noted that, despite the pervasiveness of the harassment problem, a Chinese #MeToo movement has faced substantial hurdles in gaining momentum due to government concerns about political and social unrest. As Leta Hong Fincher, an expert in China's feminist movement, told The Guardian:

There is a history of the Chinese government being really worried about political upheaval outside its borders affecting its own population and there is no question whatsoever that the #MeToo movement is seen by the authorities as potentially posing a threat.

However, despite these obstacles, Chinese women are nonetheless taking a stand. Luo Qianqian, a Chinese woman who allegedly experienced unwanted sexual advances from her supervisor, posted an account of her experience on Chinese social media site Weibo earlier this month. As The Guardian reported, Luo implored other women to speak out against sexual misconduct in her post:

[There's] no longer any need to be afraid … we need to stand up bravely and say "No!"

Luo encouraged others to use the hashtag #我也是 — #WoYeShi, or #MeToo — when sharing their stories.

The South China Morning Post also detailed the story of Xu Yalu, a Chinese woman who was repeatedly sexually harassed in public by the same man over a period of four years. Xu told the publication that the #MeToo movement inspired her to share her experience and posted an article on WeChat (a Chinese messaging app) back in November detailing how she was repeatedly harassed, and how little police reportedly did to stop the harassment. The article was viewed over a million times and received over 9,000 comments; however, it was eventually deleted by government.

The deletion of Xu's article highlights one of the very real additional obstacles Chinese women face when in comes to fighting sexual misconduct and perpetuating a #MeToo movement of their own. Indeed, as Hong Fincher, the aforementioned Chinese feminist expert, told The Guardian, any movement that starts to receive sustained social or political attention will likely result in intervention from the police or government officials. Lu Xiaoquan, a Chinese lawyer specializing in women's rights, agreed, telling the South China Morning Post that government crackdowns "are setting [women] back."

The fact that women in China are continuing to persevere to make their voices heard, even in the face of these very real and challenging obstacles, is especially admirable and courageous. Much of the world will likely be closely watching to see how the #WoYeShi movement grows and evolves as Chinese women continue to demand that their experiences are acknowledged and their harassers are held to account, even amidst widespread governmental suppression.