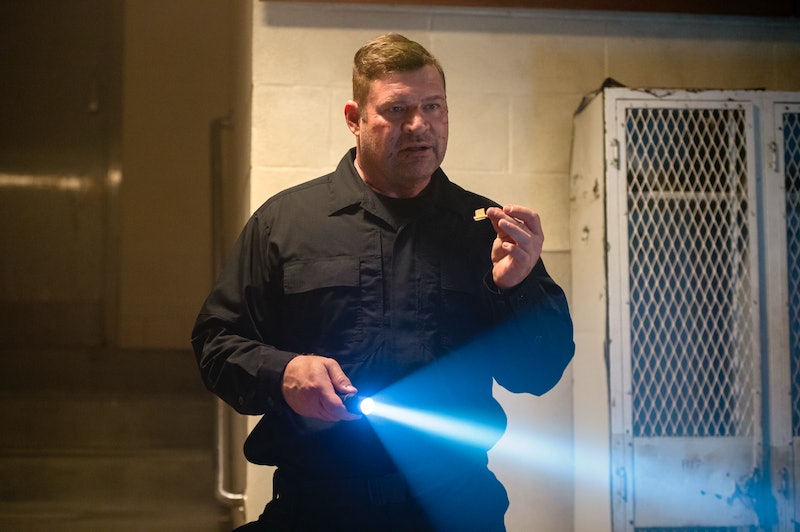 If you'll remember, the 2017 season takes place over the course of just a few days as the inmates are rioting over Poussey's accidental death at the hands of a C.O's excessive force. The riot, and the fact that Daya has a gun, leads the prison to shut down, locking out Piscatella who hadn't been working at the time. He's furious, and determined that he can take matters into his own hands better than the CERT officers tasked with the job.

Piscatella, one of the new C.O.s who came along when Litchfield switched to being a for-profit prison, is a terrifying guard. Originally having worked at a men's prison, he treats the women the same rough way he treated the men (not like anyone deserves to be treated roughly, at all). There seems to be no sympathy in his entire being. Of course, viewers learn in Season 5 that he wasn't always this way. When he worked at the men's prison, he fell in love with an inmate named Wes Driscoll. But his special treatment towards Wes resulted in other inmates raping his lover. Piscatella took matters into his own hands, killing Wes' rapist. After, he was then moved from the men's prison, but not taken out of the system. Now he, in all his rage, works at Litchfield.

During the final episodes of Season 5, he breaks into the still-rioting prison and begins capturing prisoners. He locks them in a room and tortures them. They eventually escape, and Taystee almost shoots Piscatella for his hand in Poussey's death. Ultimately, her humanity remains intact when she doesn't take the same vengeful path Piscatella once did. He's released and wanders down a hallway where he's met by the CERT officers who have arrived to break up the riot. He gets out a single, "Hey," before he's shot dead.

Afterwards, the young offending officer stammers out, "I didn't mean to. I did aim for the ceiling, sir. He's just so tall, and he caught us by surprise." Piscatella was killed by the same attitude he held as a guard: Shoot first, ask questions later. Season 5 ends very much the same as Season 4. Another young officer, another accidental death, and more lives changed for the worse because violence was the go-to.

The symbolism is easy to catch, but still just as dramatic of a narrative choice. How Piscatella's death will be handled in Season 6 will say a lot about a very real situation — what happens when an officer accidentally kills someone? And what happens when the people enforcing the system forget that It's likely that the CERT officer will get off, as he's able to state that he believed his life to be in danger and didn't realize that Piscatella was on his side. But, while there probably won't be any legal ramifications, the officer's life will be forever impacted, just as C.O. Bailey's was after he killed Poussey.

It's a circle that goes around and around, just as it does in our own world. Different day, different case, different officer, nearly always the same outcome. An accidental death and no one being held responsible. Piscatella thrived in that environment, and it's also what brought him down.