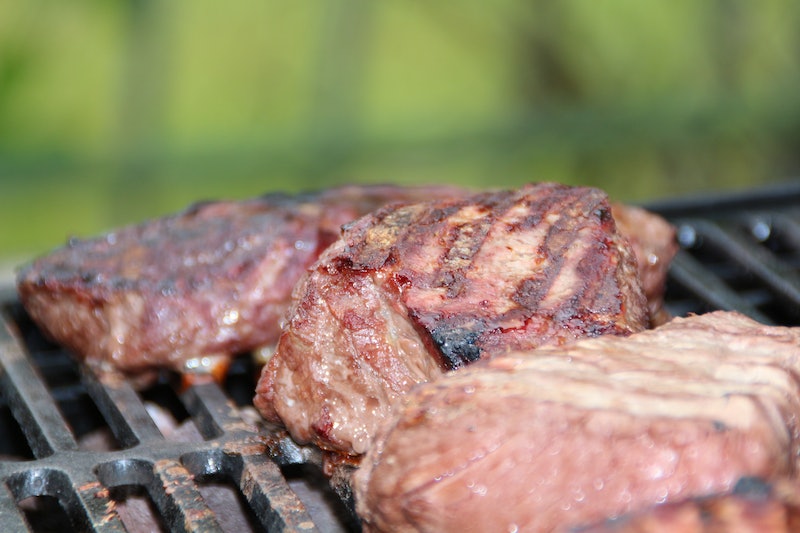 Tweets across the Western Internet tagging the Turkish chef and restaurateur Nusret Gökçe, better known by the moniker “Salt Bae,” have reached a fever pitch — but just how did the Salt Bae meme start? The image of Gökçe flamboyantly salting a steak while clad in his signature round frames, long dark hair, and deep-cut white t-shirt appeared on Saturday, Jan. 7, like some divine meme-ready gift to Twitter. In the wake of its instant popularity, #saltbae has been dubbed the official first meme of 2017 and continues to prove its staying power. Why is Salt Bae still so darn popular? Well, that may be thanks to the origin of this tasty meme.

The now infamous 36-second long video of Gökçe slicing and salting an oversized Ottoman steak with meme-worthy finesse seems to be the inspiration for the #saltbae phenomenon. It all began early on Jan. 7, when Gökçe posted the clip to his Instagram feed. This was by no means the first video that the butcher come restaurateur had posted of his impressive knife skills and unique salting technique, but it was the one to first catch the attention of the Twitterverse.

It is unclear who was first to pull the still image of Gökçe sprinkling the salt crystals so that they careened off his forearm, caught the sunlight, and fell onto the carved meat, but within 24 hours the image was widely circulating on social media. It appears that Twitter user @elBeardedBandit may have been the first (or at least an early adopter) to utilized the salty still in his version of the popular Twitter joke You vs. The Guy She Told You Not To Worry About. The tweet, which was posted at 3:20 pm EST on Jan. 7, gained 48,000 likes and 33,000 retweets within 48 hours, according to Know Your Meme; however, the tweet itself made no mention of the phrase “salt bae.”

The success of the meme is in a large part due to Gökçe's distinctively sodium-rich nickname, but so far nobody has come forward to claim responsibility for creating the hashtag. It may all be thanks to Twitter user @phillybosslady, who posted a tweet simply saying “Show me how you sprinkle ya salt bae” the morning of Jan. 7; however, it is unclear whether she was referring to Gökçe's specific salting technique, as there is no other media attached to the post.

One of the first mentions of the hashtag #saltbae appeared later that afternoon in a tweet by @lolalissaa, reading “So this is #saltbae,” clearly linking the hashtag with Gökçe by attaching the original Instagram video. Soon after she replied to her own tweet, “Don't know who coined the term #saltbae for him... but whoever you are, I heart you.”

The hashtag quickly caught on and within 48 hours the video gained over 2.4 million views and 8,700 comments. Twitter users began mining Gökçe’s Instagram for additional videos — reposting any that displayed his sensual treatment of meat, and salting technique. On Sunday, Jan. 8, the meme flooded Twitter, becoming shorthand for being “extra” or doing “the most.”

Salt Bae gained even more notoriety after being mentioned in a tweet by Bruno Mars on the evening of Jan. 8. The meme has since gone on to spark parody videos, an emoji design, fine artwork, and a renewed interest in cooking with flare. The original video has racked up over six million views on Instagram, and shows no signs of slowing down. Clearly, Salt Bae is what the internet needs right now.