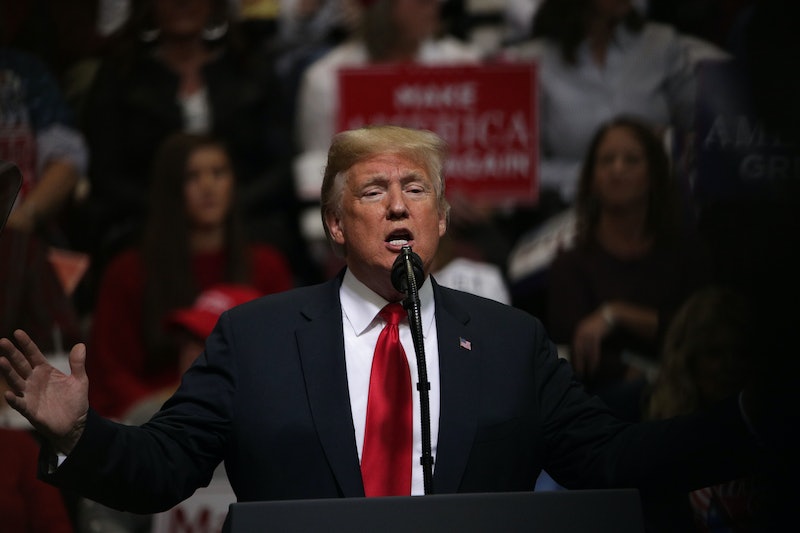 In the weeks leading up to the midterms, President Donald Trump doubled down on the campaigning for Republicans. On Monday before Election Day, he spent the morning endorsing Republican candidates across the country on Twitter and attacking the Democrats they were running against. Now that the votes are counted, here's how the 2018 midterms affected Trump; he's definitely on shakier ground, but still up for a fight.

The key result for Trump is that the Democrats won control of the House of Representatives. Votes are still being counted in some races, but there are at least 220 seats in Democratic hands, and they just needed 218 to win control. That puts the Democrats in charge of all House committees, potentially opening up the president and his administration to investigations — something the Dems very much have in mind.

Trump already addressed that possibility in a tweet on Wednesday. "If the Democrats think they are going to waste Taxpayer Money investigating us at the House level, then we will likewise be forced to consider investigating them for all of the leaks of Classified Information, and much else, at the Senate level." Trump wrote. "Two can play that game!"

At a press conference later on Wednesday, Trump doubled down on that warning and said he would take a "warlike posture" in response to any Democratic investigation, according to The Washington Post. "They can play that game, but we can play it better, because we have a thing called the United States Senate," Trump told reporters. "I could see it being extremely good for me politically because I think I’m better at that game than they are, actually, but we’ll find out."

Republican control of Congress has benefited Trump the first two years of his presidency. It not only made avoiding partisan investigations easier but helped in advancing his agenda, for example with his tax cuts.

Historically, the president's party performs poorly during the first midterms following the presidential election. The most recent comparison, in 2010, was a challenge for President Barack Obama. Pushback on the Affordable Care Act led to Republicans taking control of the House. They flipped 63 seats — and six more in the Senate.

The Republicans did better in the Senate, keeping control of the chamber by flipping a few seats in states that Trump had won by wide margins in 2016: Indiana, Missouri, and North Dakota. That was made possible in part by the great deal of campaigning that Trump himself did during the election campaign.

In addition to his rallies, you can get an idea for how important Republican wins were to Trump before Election Day by taking a look at what he wrote about the economy, tying it to the elections. "If you want your Stocks to go down, I strongly suggest voting Democrat. They like the Venezuela financial model, High Taxes & Open Borders!" Trump tweeted a week before the election. His campaign also released ads — including one that CNN refused to air, calling it racist.

On Wednesday morning he changed his tune, saying the Democratic control of the House could be good for certain projects, like infrastructure spending or health care.

"Now we have a much easier path because the Democrats will come to us with a plan for infrastructure, a plan for health care, a plan for whatever they’re looking at, and we’ll negotiate,” Trump told reporters. "From a dealmaking standpoint, we are all much better off the way it turned out."

Perhaps everyone but him.