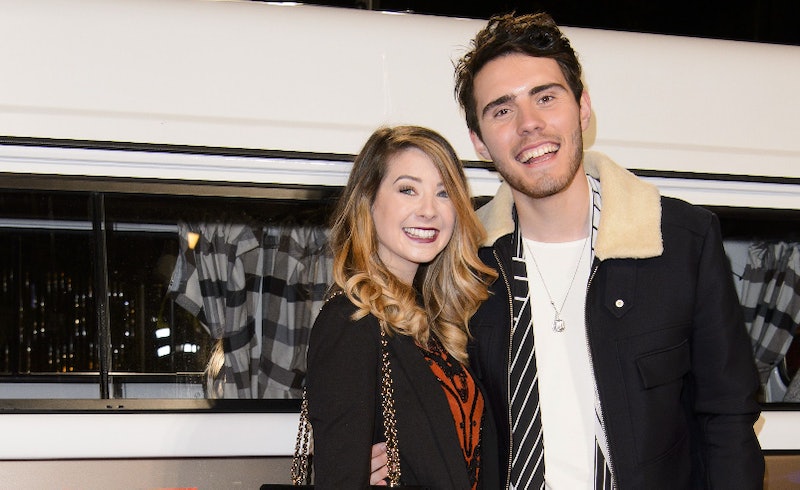 Zoella, aka Zoe Sugg, has been with her boyfriend Alfie Deyes for what seems like forever. Alfie, just like his girlfriend, has had huge success as a Youtube influencer under the internet identity Pointless Blog, and together, the pair seem pretty unstoppable. But how did Zoella and Alfie meet exactly? I've been wondering this for a while, so decided to look into it. You're welcome.

TBH, it sounds pretty simple, and rather cute. Alfie and Zoe work in the same industry, so it's unsurprising they met through their work. What is perhaps more interesting is the fact that the pair first came into contact at a meet and greet, according to Glamour, in which Zoe queued up to meet Alfie. Cute or what?

Anyone who has followed their story will know that the pair were initially just friends, and didn't acknowledge followers asking if they were an item at the start. It was in 2013 that they announced they were dating in a blog post on Zoe's website (which now seems to have been deleted), according to Hello.

Talking on fellow YouTuber Marcus Butler's channel about initially keeping his romance with Zoe a secret, Deyes revealed it was a bit of a challenge at times.

"It wasn’t that we were particularly hiding it from the internet," Alfie said. "We more just didn’t really think it was something that we needed to [reveal]. To this day we haven’t kissed on camera."

The Youtuber continued: "People were literally like detectives to prove we were together. People love to look into things, which if anything is a negative thing. If Zoe and I weren’t together, that could have ruined the friendship."

Zoe also opened up about her relationship in during her front-page-cover interview with Glamour magazine for their Spring 2018 Beauty Book. When asked whether they argue, Sugg said:

"Alfie and I both have days when we feel the pressure on our relationship and want to punch each other in the head — who doesn't?! But we know when to talk, and when to give each other space. Alfie films every day which I took a bit of getting used to, but we have a routine where I might say, "I don't fancy being in your video today," and he'll just say 'OK'. But really, we don't argue very much at all. We're kind of boring in that sense."

She also told the publication that, despite both being YouTubers, there is no sense of competition for things like views or followers: "Our relationship is never competitive," she said. "I can talk to him about an issue and I don't have to explain it because he understands immediately. The downfall is we talk about work a lot and we both work from home so we're around each other a lot."

Zoe and Alfie do seem to have a super supportive relationship, appearing on each other's YouTube channels and Instagram accounts all the time, and cheerleading each other's accomplishments. They have also done the 'Boyfriend Tag' video on YouTube, which is not to be missed. Couple goals? Absolutely.