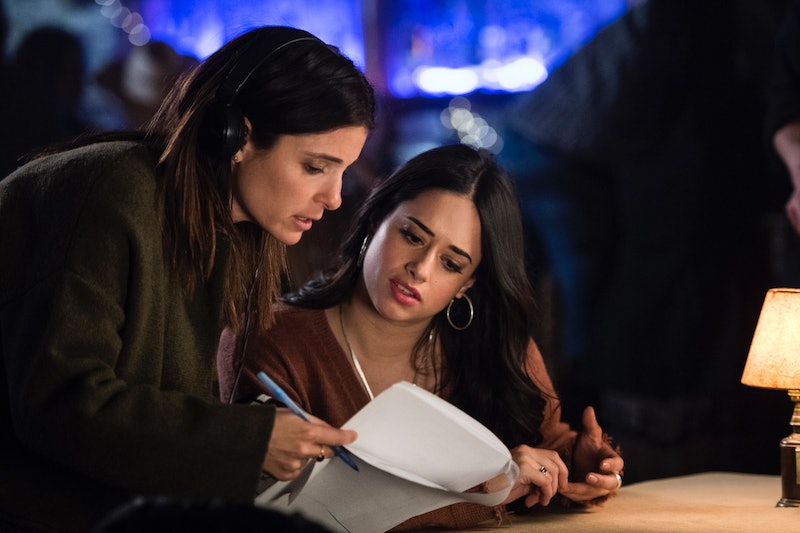 Mild spoilers from Tuesday's episode of Roswell, New Mexico, "Songs About Texas," ahead.

Shiri Appleby began her lifelong career as an actor when she was just a kid. But it wasn't until the late '90s that she became a household name thanks to her starring role as Liz Parker in the original Roswell series on The WB. Now her career has come full circle as she steps behind the camera to direct one of the most important episodes yet of The CW's Roswell reboot Roswell, New Mexico, an opportunity that means "everything" to the original Liz because she hardly ever saw female directors herself on sets throughout her entire life.

"I started acting when I was three years old," Appleby tells Bustle along with a small group of journalists in between takes on the set of Roswell, New Mexico last fall. "When we did Roswell we did 61 episodes; we had one female director on the very last episode. I never had an image in my mind of what it would be like to see a female direct."

She then adds wryly, "I dated a lot of directors. Not until I was 30 and I was on Life Unexpected I got to know this director Liz Allen, she gave me the push to start directing. I got my opportunity on UnREAL. And since I've been on UnREAL, I've been pushing and pushing and pushing to get an opportunity to direct on a show that I'm not acting in and it has been incredibly challenging."

According to the Center for the Study of Women in Television and Film, in the top 100 grossing films of 2018, women represented only 4 percent of directors. The recent statistics have inspired a new push for gender equality behind the camera in Hollywood, but the stats are still depressingly low. And to hear that even a famous, hardworking female actor like Appleby faced so much pushback in her quest to direct a TV show she wasn't already starring in shows there's still so much work to be done in making Hollywood a more diverse and inclusive industry.

But there's hope that more change is still coming, as evidenced by Appleby's own feelings on the issue. "This is my first episode that I'm directing and not acting in and it feels like I'm starting a new career," she says with a big smile. "I just think that we are in such an incredible moment in time for women in this business. There is so much opportunity." And her newfound role as a director actually helped her reconnect with her old Roswell co-stars in a way she didn't expect.

"So many of the actors, since they found out that I'm now directing the episode, have been reaching out," Appleby says. "That has been so satisfying. [Roswell was] literally 20 years ago, it's like having a 20-year high school reunion. Katherine Heigl and I have been texting more now than we probably ever did, which is amazing. Jason Behr sent me flowers on my very first day with the sweetest note which was a quote from the original show: 'If you could see you the way I see you now.' Colin Hanks is so supportive. I think it's just amazing that there's still this connection behind us and I still feel their support in this new role."

And while Appleby knows that "right now it's really not our place" to do a Roswell reunion with her former co-stars because she wants to let the reboot be its own show, she's down to reunite with her old Roswell cast in a different way.

"I have like attacked Jason — I mean Jason Behr and I are dying to work on something together," Appleby says with a laugh. "We're really trying to figure it out like what that could be. The chemistry is still there. I don't know what it is. [But] this is the version of Roswell that's existing and all we can really do is get behind it and give it our support. But if anybody has a script idea for Jason Behr and I, we're happy to do it."

Appleby has enjoyed seeing how The CW's reboot "updated" the original source material for 2019. "It made a lot of sense, it feels like a very current story in so many ways," she says. "It's actually much more in line with the actual book. There's a lot of nods to the original but very quickly it becomes its own show. To be honest with you, it feels very flattering. It feels like there's a legacy and our version of the show really hit a chord to the fact that there is enough of an interest to bring it back and reboot it. I take it as a compliment quite, honestly."

When she got the script for her episode, "Songs About Texas," she immediately understood why the showrunners were so insistent about having Appleby direct that specific hour.

"This episode is really about the relationships, people coming together," she says. "It's really Max and Liz's first time kissing. Isn't that special? For me directing this scene, it was so awesome! And Michael and Maria are finding each other."

Being in the unique position of directing someone else playing the same character that made Appleby famous at such a game-changing moment in the new series, she approached her new role with care.

"A lot of times I was saying to Jeanine [Mason], 'Well my version of Liz would react this way, how does your version of Liz react?'" Appleby says. "You want to tell them what worked for you as the actress but at the same time give them the space and the freedom to create their own characters and their own way of being."

The whole experience felt "like passing the baton," Appleby adds. "My version of Liz was 16. Her version of Liz is in her late 20s. My character had so much vulnerability and she was trying to figure out who she is. Her version of Liz knows who she is, she's a very strong woman, she's capable of asking a man to dance without having a lot of insecurities. In some ways it's a much stronger, much more mature evolved character than I played."

And while Appleby credits the change in the character and actor's age for some of this, she also gives credit to Mason. "A lot of that has to do with just who Jeanine is and what she's bringing to it," Appleby says. "I was just holding on for dear life myself [on Roswell]." Thankfully, with Appleby's help, Roswell's new generation has the support it needs.

More like this
Nicola Coughlan Shared A Lady Whistledown Excerpt From ‘Bridgerton’ Season 3
By Grace Wehniainen, Alyssa Lapid and Sam Ramsden
UK Viewers Will Have To Wait To Watch The Handmaid’s Tale S5
By Maxine Harrison
The 'Bachelor In Paradise' Schedule Shifts To 4 Hours Every Week After The Season 8 Premiere
By Brad Witter
A New 'And Just Like That' Table Read Pic Confirms A Key Character's Return
By Jack Irvin and Grace Wehniainen
Get Even More From Bustle — Sign Up For The Newsletter