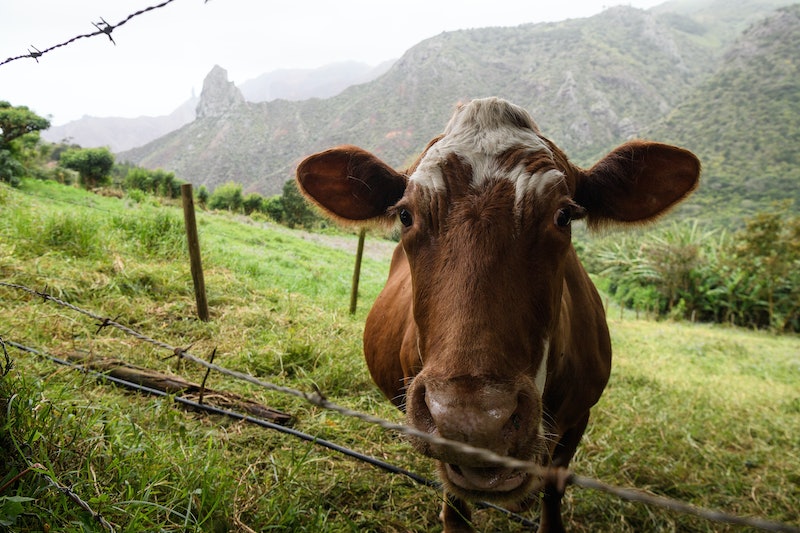 In recent weeks, the Green New Deal has made headlines for a number of reasons, not the least of which is that it explicitly mentions the importance of dealing with a very specific environmental issue: cow farts. The proposal, which offers radically progressive strategies to combat economic inequality and climate change, has brought this long-documented issue to the forefront of the political conversation. And if you're wondering how cow farts affect global warming, then you should know that they're a part of the problem, according to a report by the United Nations, among others.

Within the outline for the Green New Deal, as released on Feb. 7, cows are mentioned in the following context:

We set a goal to get to net-zero, rather than zero emissions, in 10 years because we aren’t sure that we’ll be able to fully get rid of farting cows and airplanes that fast...

To be clear, the Green New Deal is not the only recent document that directly acknowledges the role that cows play in climate change. Bill and Melinda Gates also acknowledged it in their annual letter, which was released on Feb. 12. The letter reads in part,

I wish more people fully understood what it will take to stop climate change.. we need to do a much better job of informing people about the challenges. It would help if media coverage matched the breadth of the problem. Solar panels are great, but we should be hearing about trucks, cement, and cow farts too.

The deal with the cows is simple: when they burp and fart, they're burping and farting out methane. According to the United Nations, as reported by NBC News, these burps and farts contribute to at least four percent of all greenhouse gas emissions. On a greater level, the United Nations further reports that the livestock industry is responsible for around 18 percent of greenhouse gases contributing to global warming.

That second statistic points to what many people might be missing when they get caught up in the slightly strange notion of cow farts being mentioned in legislation: it's not just about the farts and burps. Rather, it's also about the overall carbon footprint that livestock (and cows specifically) leave behind.

According to a report by the Food and Agriculture Organization of the United Nations (FAO), livestock now take up 30 percent of the entire land surface on the earth. The implications of this, the report explains, are wide reaching:

The livestock business is among the most damaging sectors to the earth’s increasingly scarce water resources, contributing among other things to water pollution, euthropication and the degeneration of coral reefs. The major polluting agents are animal wastes, antibiotics and hormones, chemicals from tanneries, fertilizers and the pesticides used to spray feed crops. Widespread overgrazing disturbs water cycles, reducing replenishment of above and below ground water resources. Significant amounts of water are withdrawn for the production of feed.

So when environmental activists and climate change-conscious lawmakers talk about cow farts, they're really referencing the tip of the iceberg when it comes to how the livestock industry impacts global warming.

If you want to learn more about the impact that livestock makes on the climate change crisis, you can read the full report by FAO.