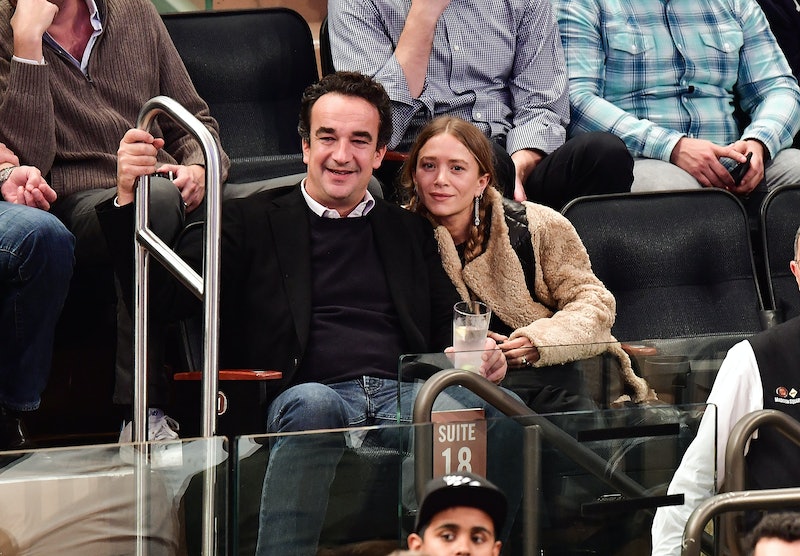 Is it really that hard to file for an emergency divorce amid a pandemic, when your husband is trying to kick you out of your apartment? The answer is, apparently, yes — even if your name is Mary-Kate Olsen. Olsen first signed a Summons and Complaint for divorce from husband Olivier Sarkozy on April 17, but also submitted an emergency affidavit on May 13, and was reportedly met with a "no" from the judge.

And that's because there really is no such thing as an emergency divorce, according to New York City-based family and matrimonial lawyer Ken Jewell, Esq. Olsen was trying to protect herself and her property by submitting the affidavit, but the law doesn't work that way — especially during a pandemic.

"[The] rejection of the Olsen/Sarkozy application only revolved around the fact that the courts are not accepting the filing of new actions, divorce or otherwise," Jewell tells Bustle. All New York City courts are currently closed due to social distancing, so there's nothing anyone on the precipice of divorce can do but wait until things open back up.

That said, Jacqueline Harounian, Esq., a partner at a family law firm in New York City, tells Bustle that a new case could be considered an "emergency" if it involves domestic violence or child abuse. Then it will get immediate attention from the police and child protective services. "At this time, no other case is getting a response from the judges," she says.

Olsen asked the court to deem her application for a Summons and Complaint for divorce "essential" because Sarkozy terminated their apartment lease without her knowledge, thus putting her at risk of losing personal property, according to her affidavit. She also claimed to be worried about moving on such short notice, and in one of the cities most impacted by COVID-19.

"Considering her other housing options and significant financial resources, there wasn’t a need to deem her matter essential," Robert Wallack, Esq., a New York City divorce lawyer, tells Bustle. It remains to be seen what will happen with the Olsen/Sarkozy application, but the main takeaway is that "emergency divorces" are those filed when someone is in immediate danger. In any other case? Not a thing.

More like this
Beyoncé & Madonna’s “Break My Soul” Remix Honors A Group Of Black Icons
By Stephanie Topacio Long
Tom Holland Explained His Social Media Break & Shared Mental Health Resources
By Grace Wehniainen
The Best Time To Date After A Breakup, According To Experts
By Bustle Editors
Laura Tott From 'First Dates' Married Her Long-Term Mystery Boyfriend
By Darshita Goyal
Get Even More From Bustle — Sign Up For The Newsletter