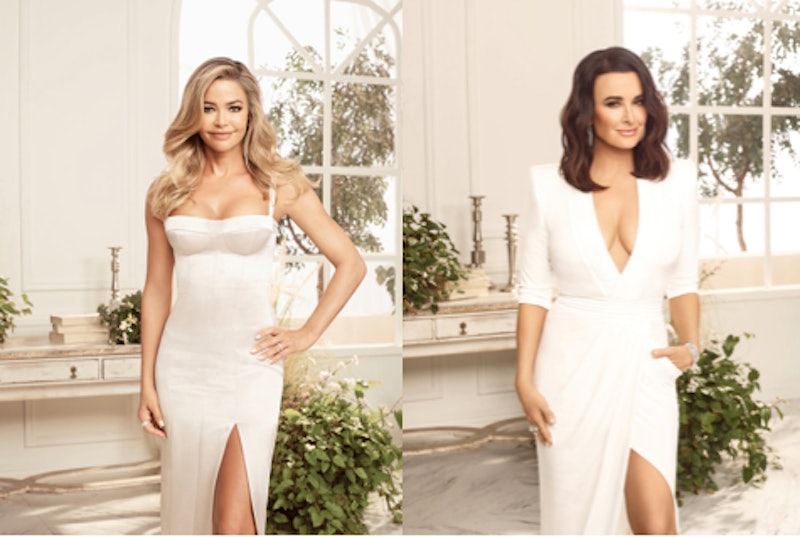 Denise Richards is the third person with the last name "Richards" to be a cast member on Real Housewives of Beverly Hills. Does this mean that she's related to sisters Kim and Kyle Richards? Or is that just a coincidence that these two Hollywood vets share a similar name? Sadly, Denise of not one of their sisters, but Kyle and Denise knew each other before RHOBH. They've been running in the same circles for years, or at least that is the case according to Kyle.

During an on-camera interview from the Season 9 premiere episode, Kyle said, "11 years ago, I was part of this ‘Hollywood moms’ group. It was Lisa Rinna, Denise Richards, Ali Landry, myself, Alison Sweeney, and we would get together now and then." She added, "Everyone would bring a potluck, whatever their favorite dessert was, and that’s how I got to know Denise originally."

Now that sounds like it would have been an interesting reality TV show back in the day — can we make this spinoff happen?

Unfortunately, that show never existed, but thankfully the Real Housewives franchise exists. Denise Richards joined Real Housewives of Beverly Hills thanks to her close friend Lisa Rinna. However, she did meet some of the other ladies before becoming a Real Housewife herself. In a Feb. 7 interview with The Chicago Tribune, Denise discussed her history with the Beverly Hills Housewives. She began, "I met quite a few times Camille [Grammer], and I was briefly in a mommy-and-me class with Teddi [Mellencamp Arroyave], but I didn’t get to know her."

Ultimately, Denise said, "So really the only ones I really knew were Lisa [Rinna] and Kyle — we had met years ago. We did an episode together of Watch What Happens Live, and we had dinner the night before. Our paths have crossed quite a few times." Denise did not mention that "Hollywood moms" group that Kyle referenced, but she did admit that they've crossed paths throughout the years.

In a video interview that Denise did in between filming the Season 9 cast trip in the Bahamas, Denise admitted, "I was nervous about going on this trip with a bunch of people I didn't really know except for Lisa Rinna. I knew Kyle a little and Camille, but not as well as I know Lisa." Once again, she mentioned the WWHL episode she did with Kyle. Denise said, "So Kyle, I bonded with her when we did Watch What Happens Live a few years ago."

During the after show from that 2013 Watch What Happens Live episode, a fan asked Denise "If you had to do another girl on girl kiss, who would it be with?" She answered "Kyle." Most likely, she picked Kyle since Kyle was sitting right next to her, which is a go-to move for guests who aren't sure how to answer a question on this show.

They might not have been close friends going into the show, but it sounds like this friendship was destined to happen. "Meeting" someone multiple times who has the same last name and some mutual friends sounds like a guaranteed friendship at some point. Just who would have thought that would happen while filming a reality TV show full of arguments?