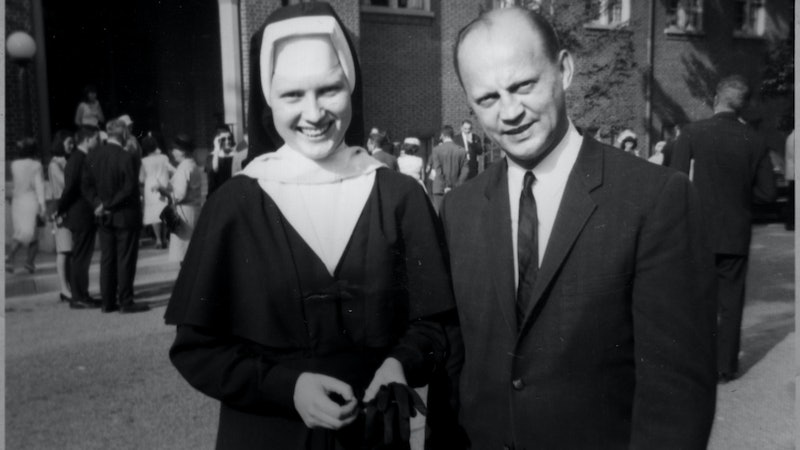 Like Making A Murderer before it, Netflix's latest true crime docuseries The Keepers takes on a subject that is both compelling and necessary to explore, but also deeply disturbing at the same time. While the series mostly focuses on the 1969 unsolved murder of a 26-year-old Catholic school teacher and nun named Sister Cathy Cesnik, it also explores allegations of sexual abuse brought forth by former students against the school's chaplain as a possible motive for her murder. Since many of these abuse allegations arose from uncovered repressed memories, it's pretty important for everyone who watches to understand how repressed memories work before getting too far into the series.

The topic of repressed memories, which are also referred to as dissociative amnesia according to a Washington University study published in American Psychologist, is an incredibly controversial one. Psychiatrists and psychologists alike can't agree upon whether the phenomenon is real or if it is something else, disguised as an actual memory of a real event. The idea is that sometimes when a person (usually a child) has gone through a truly significant trauma, the human brain, as a defense mechanism, will lock the experience away, only to release it at a later time. This recovery can occur either when the subject has been triggered or seemingly just out of the blue.

In this particular case, former students at the Catholic high school where Sister Cesnik taught came forward with formerly repressed memories of alleged sexual abuse by the school chaplain Father Joseph Maskell. In a statement given to Bustle, the Archdiocese of Baltimore had this to say about these allegations:

Since the 1990s, when the Archdiocese of Baltimore first learned of an allegation of child sexual abuse against Maskell, and on numerous occasions since, the Archdiocese has publicly acknowledged and apologized for the horrific abuse committed by him. The Archdiocese reported the allegations to civil authorities in the 1990s and cooperated fully in any investigation, removed Father Maskell’s faculties to function as a priest, apologized to victims and offered them counseling assistance, sought additional victims, and provided direct financial assistance to 16 individuals abused by Maskell. Though it was unaware of the abuse at the time it occurred approximately 50 years ago, the Archdiocese deeply regrets the damage that was caused to those who were so badly harmed and has worked diligently since becoming aware of their abuse to bring some measure of healing to them. The Archdiocese is wholly committed to protecting children, holding abusers accountable—clergy and laity alike, and promoting healing for victims. These are hallmarks of the Archdiocese’s child protection efforts, which we strive to constantly strengthen. There is no room in the Archdiocese for anyone who would harm a child and every effort must be made to ensure what happened before never happens again. It is our hope that “The Keepers” advances this pursuit, just as we hope the series helps those who have kept alive the memory of Sr. Cathy and our collective hope that justice will be won for her.

Relying on repressed memories, especially in legal matters, can be tricky, as they can allegedly be therapeutically coerced out of someone with the proper techniques and Psychology Today reports that this can result in false memories being created. According to The Daily Beast, the first alleged victim in The Keepers came forward in the 1990s after recovering the repressed memories of being sexually abused in her youth. Because of the lack of scientific knowledge surrounding repressed memories, The Huffington Post reports that there are some that call the credibility of these kind of claims into question, due to their origins. Unfortunately, psychologists has failed to produce a valid method for bringing about a repressed memory or for determining whether a memory is repressed or false.