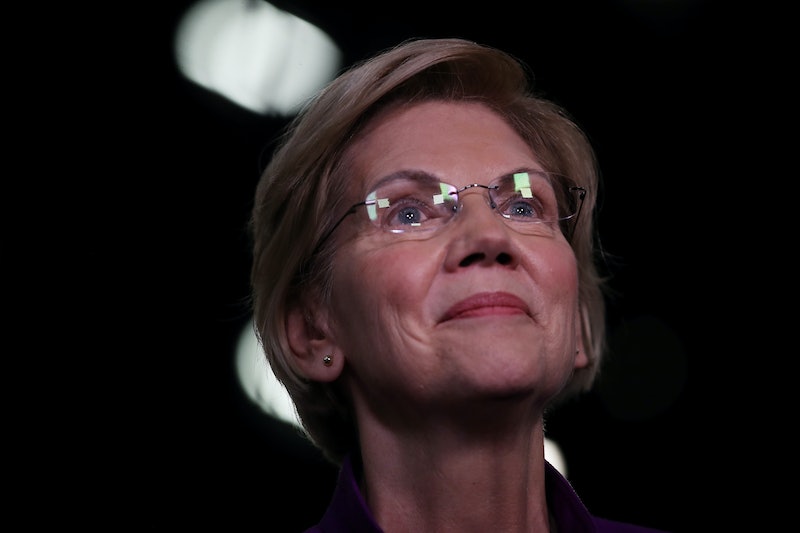 Democratic candidates in the 2020 presidential race are tackling specific, hot button issues in order to make themselves stand out in the crowded field. Sen. Elizabeth Warren recently released a plan to close the gender pay gap, making her the latest to roll out a concrete proposal to address the issue after Sen. Kamala Harris released a plan back in May. Though all the 2020 candidates have supported the movement for pay equity in some form, Harris and Warren have released new and specific plans to address it. Warren's focuses entirely on closing the gap for women of color, who make the least compared to the white man's dollar.

Experts and advocates, who caution they aren't endorsing any specific plan or candidate, tell Bustle that the plans include some proposals that women's rights organizations have long championed, but that the issue is so complex that both plans fall short in some way. And, they note there is already legislation in Congress that could accomplish much of what the candidates have proposed, although it's stalled.

Warren's plan includes a number of executive actions that would affect government contractors, diversity of the federal government, and the Equal Employment Opportunity Commission's (EEOC) enforcement of laws that stop systemic discrimination.

The action affecting government contractors in Warren's plan would require them to "disclose data on employees’ pay and role, broken out by race, gender, and age," which builds on pay data collection requirements that already exist. Warren would then "direct agencies not to enter into contracts with companies with poor track records on diversity in management and equal pay for equal work." An executive action would also ban employers from using forced arbitration and non-compete clauses, ban them from asking for past salary information and criminal history, and require a $15 minimum wage and benefits like paid family leave, among others.

Harris' plan includes similar data collection requirements, but under her proposal companies won't receive an “Equal Pay Certification” from the EEOC unless they commit to eliminating forced arbitration and requests for past salary information, for example. Harris' plan also would apply to all companies with 100 or more employees, not just the federal government and contractors.

Deborah Vagins, senior vice president of policy for the American Association of University Women, tells Bustle data collection is critical in any plan to close the gender pay gap.

"If you don't have information about a problem, it's very difficult to do anything about it," she says.

Prior to working at AAUW, Vagins worked on a team at the EEOC during the Obama administration that designed a pay data collection system. That initiative was ready to be implemented in 2016, but halted by Trump once he took office.

"The idea that having more information would be shut down is very problematic if we're really trying to enforce our nation's civil rights and pay equity laws," Vagins says.

In addition to pay data collection, Vagins says bans on forced arbitration, or pre-dispute arbitration agreements, will make it easier for employees to use pay discrimination protections that do exist. Those agreements usually require that employees sign away their right to take a dispute, such as pay discrimination, to court before the dispute even happens.

An increased, consistent penalty like what's described in Harris' plan might better deter illegal pay practices, according to Vagins, when combined with legislation stalled in Congress like the Paycheck Fairness Act.

"In the end, that's what we want damages or fines or penalties to do is, be a deterrent from engaging in the illegal behavior in the beginning," she says.

Though both plans have sweeping proposals to uncover and deter unequal pay, Chandra Childers, study director for the Institute for Women's Policy Research, points out that one thing that neither plan specifically mentions is occupational segregation, which is when one demographic group makes up most of the workforce within a particular industry or job type. Women of color make up most of the workforce in child care, elder care, and food preparation jobs, for example, all of which are fields where the wages are low. They also often face barriers to entering higher-paid fields, such as the high cost of college education.

If Warren's plan is "only looking at people being paid differently in the same job, that does not address occupational segregation," Childers says. But she notes that Warren's other policy propositions, like access to free college education and eliminating student debt, could help.

Still, free college wouldn't help totally solve the pay gap women of color, or even women generally, face. Maya Raghu, director of workplace equality at the National Women's Law Center, says women of color still face unequal pay when they have college degrees, so increasing the minimum wage, which Warren and Harris both support, is also an important part of addressing the wage gap.

Raghu notes that there's legislation already in Congress, such as the Raise the Wage Act, that would address this. The Paycheck Fairness Act also includes a ban on asking for salary history and on forced arbitration clauses. In addition, Sen. Kirsten Gillibrand, who's also vying for the Democratic presidential nomination, has repeatedly introduced the FAMILY Act, which would mandate 12 weeks of paid family leave.

The fact that all of these policies are stalled in Congress because of a lack of bipartisan support in the Senate is a potential road bump for Harris' plan, which would rely on congressional support to be passed into law. Warren, on the other hand, would be able to enact her policies immediately by executive order if she were elected president.

Advocates say the simple fact that both of these plans focus on or include women of color is very important, and it could set the standard for any other concrete equal pay plan released by a 2020 candidate. Jennifer Reisch, legal director for Equal Rights Advocates, says systemic interventions that start with women of color are the best way to address the pay gap because they "place those who are facing the greatest harm and who are suffering the greatest disparities at the center... those are the solutions that are in fact going to lift up everyone else."