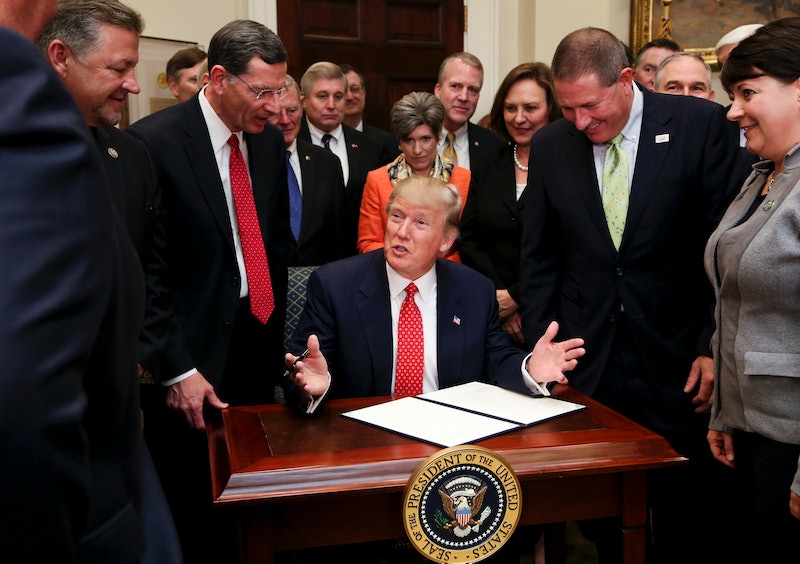 In the aftermath of November's election, a strange thing happened in America. Many liberals were disheartened and frustrated and furious on November 9, but on November 10, they got out of bed and got to work. They started political advocacy organizations like Indivisible. They attended local government meetings. They urged others to action. They pushed lawmakers to hold town halls.

People who hadn't been politically active before were moved, taking to the streets and their representatives' offices. The stakes had changed, and those who had never been the patriotic type were ready to fight for the spirit of America. In January, people turned out in unprecedented numbers to protest the inauguration. Social media buzzed. People descended upon airports to protest an unconstitutional and unjust immigration order. In February, packed town halls were filled with angry constituents asking questions about health care and Russia. In March, threats to the Affordable Care Act stirred people into action, but at the same time, interest in other issues — ongoing confirmation hearings, oil pipelines — began to fall by the wayside.

As someone who's spent time working in and around nonprofits, this pattern is very familiar, because I used to see the same cycle with volunteers. Enthusiasm after a motivating event, followed by a few months of hard, dedicated work, sharing ideas, lively recruitment of others, and then ... a trickling off. Missing meetings. Skipping events. Not responding to emails and phone calls. Passing me in the grocery store and looking the other way, ashamed.

So how do you stay focused? How do you hang on to the momentum that lets you get up every morning, check the news, call your reps, go to a local political event, volunteer with a group doing things you care about?

I'm not the only one with answers to these questions, but I've been politically active for over 15 years, including working for a U.S. Congressman, reporting on U.S. politics, and working closely with extremely experienced political organizers. So, to put it mildly, I have a few ideas. It can feel hard to stay energized when it seems like nothing is working, when cabinet nominee after cabinet nominee sails through confirmation hearings and Congress repeatedly passes legislation over outcry from the public. It's easy to want to lie down and give up, let whatever is going to happen, happen.

The biggest thing I want people to understand about political action is that it is repetitive, slow, and boring.

You know what they say about putting your pants on one leg at a time? Or how you piece a quilt? It's a lot like that. You do it one piece at a time, one thing at a time, focusing on what you are doing in this moment until it's done, and then you pick up the next piece, and you start all over again.

The biggest thing I want people to understand about political action is that it is repetitive, slow, and boring. It is weeks, months, or years of quiet, focused work, and then a brief moment when it all comes together ... or all falls apart. You can't be in it for a quick fix, or for attention. Think of yourself as a member of the crew, scurrying around behind the scenes, not the principal dancer or the lead. If you do it right, no one will ever see you, except for a flash during scene changes, but you'll still get to go to the cast party.

Sometimes it will feel like nothing is happening. Sometimes you get handed defeats. Other times, you get that brief, shining moment when something finally goes according to plan after extensive coordination, and you should feel good about that. When the New York Times notification that Michael Flynn was out as National Security Advisor after sustained pressure from the American public, I was in a city council meeting — at the break, I told a friend, and the room went up in a cheer. We did that thing, America.

I also want people to know that it's OK to know and to set limits, and to focus on not biting off more than they can chew. There's so much going on, so much that is wrong, that it's easy to get spread too thin focusing on everything at once, losing track of the threads, getting overwhelmed.

Pick an issue or two to focus on, and distribute responsibilities amongst your friends. When you need help with your issue for a big push, send up a bat signal. And when others do the same, switch gears to help them. Maybe your thing is trans rights. Get deep inside it, know it, track it on a national and state level, and when something big happens, ask people to call their representatives or submit comments on a proposed rule. Meanwhile, when your friend focusing on immigration asks for help, be there to provide backup.

And while you're at it, look out for your stress levels, especially if you have a mental health condition. Set boundaries for yourself — maybe that's not looking at Twitter after 9 p.m., arranging your schedule so you always get eight hours of sleep, getting a better handle on your anxiety, or committing to take a walk every day. Remember that you have to put on your own oxygen mask before helping others, and if you're unhealthy, you can't help anyone. We're all in this together, and that means we look out for each other, too, which sometimes means picking up the slack for a friend, or hosting a game night to forget about everything for a few hours.

When things feel futile and pointless, go look back on a victory — the withdrawal of Andrew Puzder as Labor Secretary, the release of DREAMer Daniela Vargas, the court rulings slapping down Trump's immigration order — and remind yourself that the people involved most definitely experienced periods where they wanted to give up, but they kept going. And look into the future, to your goals, to the things you want to make happen in the world, and cling to them.

We can do this. It's not going to be a breeze and it won't happen all at once, but we can, because we believe in each other, and we believe in America.

More like this
Scotland's First Period Dignity Officer Is... A Man?
By Darshita Goyal
UK Black Pride 2022 Just Broke A Major Record
By Sam Ramsden
42 Black Owned Fashion & Beauty Brands To Support Today & Always
By Mekita Rivas, Shea Simmons, Kui Mwai and Dominique Norman
'The Capture' Is Finally Back – & S2 Looks Tense AF
By Sophie McEvoy and El Hunt
Get Even More From Bustle — Sign Up For The Newsletter