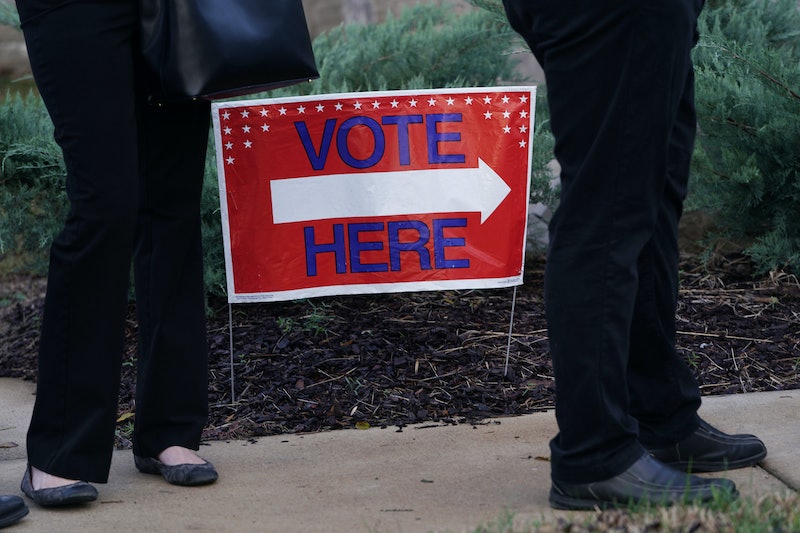 Last month, Taylor Swift made her first-ever political endorsement in an Instagram post. Not long afterward, former President Barack Obama made a viral video where he picked apart excuses people use to justify not voting. Then Twitter users (and at least one media outlet) started tricking people into clicking through to voter registration forms disguised as hot celebrity gossip. It’s unclear if these tactics will prod young people to the polls on Nov. 6. Thankfully, there is some data on how to get people to vote.

Those are concerning statistics for any candidate who’s trying to encourage 18-to-29-year-olds to vote — or leaning on them for a victory. But while there may be no quick social media fix, there are “get out the vote” tactics that statistics have shown do get people out to the polls.

“Technology can make organizing more organized, but it's never going to replace organizing.” Debra Cleaver, founder and CEO of Vote.org, a nonpartisan organization focused on registering voters and increasing voter participation. “And I feel like especially in Silicon Valley where I'm physically located, everyone wants to know which app they can build that will solve like the voter turnout problem and the answer is there's no app that will replace organizing.”

What Studies & The Experts Say About Actually Getting People To Vote

Green and Gerber come to some notable conclusions about how effective different voter outreach techniques are. The basic idea, Green explains to Bustle on the phone, is “the more personal the better.”

“Door-to-door canvassing by enthusiastic volunteers is the gold standard mobilization tactic,” they write at the beginning of the book. “Chatty, unhurried phone calls seem to work well, too.”

As far as getting young people, specifically, to cast a vote, Green emphasizes inviting them sincerely into the process through body language and verbal cues.

“The way to think about that is, if you were to go find yourself an 18- or 19-year-old, that person's chances of voting — not a political science major, but just ordinary teenager — that person's probability of voting is going to be 10 or 15 percent,” he explains. “And yet if you were to say, ‘let me help you get yourself a permanent absentee ballot and we can go over the issues together and we can go to the mailbox to drop it in the mail together,’ that'd be like 90 percent, because you're effectively functioning like [a] relative and guiding them through the process.”

Debra Cleaver, founder and CEO of Vote.org, a non-partisan, nonprofit organization focused on outreach to voters through technology, tells Bustle that the downside of canvassing and phone calls is that they are time-consuming and labor-intensive.

Texting also was thought to be difficult to implement, since voters needed to opt-in to receiving messages. However, a new technology available in 2016 meant that text messages could be sent from volunteers (AKA: humans, not a computer) to would-be voters. This technology allowed Vote.org to study whether text messages were an effective method to increase turnout during the 2016 election. In an experiment using 1.2 million people, separated into a control group and a test group, they found that peer-to-peer text messages about polling places led to a 0.2 percent increase in turnout.

"To a person who doesn't have any interest or motivation to vote, a reminder doesn't really matter."

Cleaver believes that texting is a great way to reach Vote.org’s target populations: young people, the LGBT community and people of color. Plus, a Vote.org piece on Medium argues that 90 percent of all text messages are read within 3 minutes, suggesting it’s an effective outreach tactic.

Prior to the 2016 election, Green and Gerber wrote about several small studies of text messages that together suggest voters who receive certain types of message are more likely to go cast a ballot.

Green explains on the phone that mail, text messages, and email have “some effect” on voters, but not as much of an effect as canvassing. “Yes, people are being reminded to vote,” with mail or email and text messages, “but to a person who doesn't have any interest or motivation to vote, a reminder doesn't really matter,” Green says.

Text messaging is only one form of digital communication that young voters — and therefore campaigns — use. While there aren’t many statistics available that show how social media platforms like Instagram, Snapchat and YouTube impact voter turnout, “Get Out the Vote” studies have been done around Facebook.

Certain types of ads that appear in a Facebook user’s newsfeed have little to no effect on turnout, according to Green and Gerber. However, Facebook and other researchers conducted a study in 2012 in which a group of users were shown profile photos of up to six friends on the platform had voted and a list of other friends that voted, in addition to information about voting and an “I voted” widget. These users had a greater turnout of 0.39 percent than the control group of users who weren’t shown the same information, the study found. Finally, a small study that Green and Gerber discuss in their book found it’s possible that seeing friends share political messages makes a Facebook user more aware of an election and more likely to vote in that election.

How Canvassing Gets The Message Through To People

One group that’s been active ahead of this year’s midterms is Flip the 49th, a progressive grassroots organization in California’s 49th Congressional District. Co-founder Terra Lawson-Remer tells Bustle that the group is meant to be a base of political activism and community building, so it doesn’t coordinate with campaigns. Lawson-Remer’s goal instead is to reach those in the community who are less likely to vote and encourage them to be politically active. In addition to canvassing, Flip the 49th holds events and makes phone calls and sends text messages to potential voters.

"It’s not simply a question about getting folks jazzed about voting, but it’s empowering people. That goes beyond just giving someone their polling place and telling them who their candidates are."

Spencer Katz, 21, is a college student at the University of California, Davis who’s currently on leave from school to work with Flip the 49th. On a Saturday afternoon in September, as he’s out canvassing in San Diego County, he finds that many of the people on his contact list are between the ages of 18 and 35. They’re also unlikely voters. At several of the homes Katz visits, parents or grandparents open the front door and are surprised to find that he wants to speak directly to their son or grandchild.

“It’s not simply a question about getting folks jazzed about voting, but it’s empowering people — empowering them to vote — and that goes beyond just giving someone their polling place and telling them who their candidates are,” Katz explains to Bustle. “And I think that goes to the question of youth really well: Outlining the direct connection to things they are voting on and the issues that they care about.”

By way of example, Katz points to a ballot measure in San Diego County that would impact the way residents elect their Board of Supervisors. While it may not sound like a sexy topic, the members of the county’s board decide on issues that affect the county’s response to climate change, a topic that young voters care about.

Katz also acknowledges that he may not be the best person to explain why young people historically don’t vote in huge numbers because he’s so politically active. Indeed, the headlines these past several months would suggest that eligible voters in their late teens and 20s are more politically aware than in recent years. Following the Parkland shooting, countless students became activists and organized walkouts, rallies, lobbying days and voter registration drives aimed at supporting gun control and safety in schools. Whether that spike in visible activism translates to actual votes, though, still remains to be seen.

One of those student activists, 16-year-old Lane Murdock, who organized the #NationalSchoolWalkout, can’t vote in this midterm election but is working on getting others who are eligible to vote to head to the polls. She says that her experience with getting young people engaged in politics has been mixed. Some are eager to participate, she explains, while others tell her they don’t believe that politicians care about young people or else voice skepticism that they can make an impact on the political process. Murdock says she’s been using a combination of the technology and canvassing to encourage people to vote.

“I kind of believe that when it comes to getting people interested in voting and interested in being part of democracy online, it's effective in the sense that you can reach a lot of people, but it doesn't usually have a lasting impact unless it's followed up with repetition,” Murdock tells Bustle. “And then the opposite is like canvassing and phone banking. It’s not as easy. It takes a lot more work. But if you build a relationship with someone in that moment, it can have a lasting impact on the turnout.”

Or as Green puts it: “For a lot of people, it's that personal invitation that makes a lot of difference.”