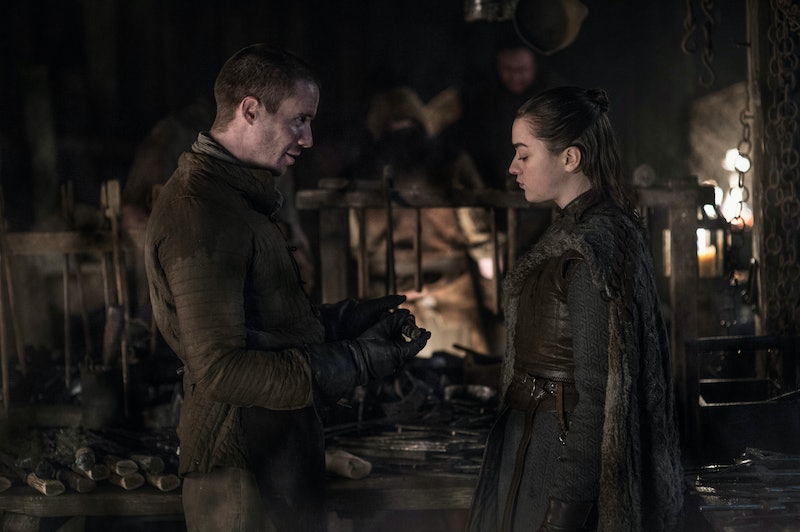 Quick recap: fire and dragonglass kill wights, the blue-eyed zombies, and Valyrian steel kills the White Walkers who lead this undead army. Sam used a dragonglass dagger to kill a White Walker, but it actually might create them as well, which means that the living are going to need steel as well. The known Valyrian steel blades on the HBO series include: Jon Snow's Longclaw, Brienne's Oathkeeper, Jaime's Widow's Wail (which really needs another name), Sam's Heartsbane, and Arya's unnamed catspaw dagger. In the books, there are a few more, and several family swords have been missing for ages. Still, that's clearly not enough. Someone is going to have to make more.

In Season 4, Jaime Lannister makes the quick expositional comment that "no one's made a new Valyrian steel sword since the Doom of Valyria," a very long time ago. While the metal has been broken down and reforged, like Tywin Lannister did with Ned Stark's Ice to form Widow's Wail and Oathkeeper, starting from scratch is a thing of the past. It might require dragon fire, or magic, or something even more mysterious. Whatever the materials are, they were expensive even at the time. That's why most Valyrian swords are family heirlooms.

The "Doom of Valyria," four centuries before Game of Thrones takes place, is actually a part of Essos history. The ruins, as you may recall, are where Jorah got attacked by stone men who give him greyscale, and Tyrion Lannister saw his first real life dragon. So, if anyone in Season 8 tried to go to Old Valyria to learn the secrets of the ancient steel, they would be putting their lives at great risk.

That said, Game of Thrones has dragons courtesy of Daenerys Targaryen, magic courtesy of Melisandre — who left to visit the Valyrian colony of Volantis — and a blacksmith in King Robert Baratheon's bastard son Gendry Waters. Were these characters to form a Valryian Steel research team, uncovering this secret is not entirely out of the nine realms of possibility. There's also the Encyclopedia Bran-tannica. He might be able to look into the past and figure it out. The bigger issue, with the Night's King on the march, is time.

One big theory is that the Iron Throne will be melted down to forge Valyian steel. Maybe the dragons can do it? Has the answer really been under the butts of monarchs this whole time? You can tell Valyrian steel by the markings on the blade, almost like a fingerprint or tree rings. So, no, the Iron Throne is not currently made out of Valyrian Steel. That would be a terrible use of resources.

However, quick chemistry lesson from the real world. Steel is an alloy, which means a mixture of many metals. It's made primarily from, you. guessed it, iron! Also carbon — the element whose most recognizable forms are graphite (coal) and diamonds. There's probably a larger/better source of iron in the Seven Kingdoms than King's Landing. However, it's really starting to look like nobody is going to end up sitting on the Iron Throne at the end of this series. Why not destroy it to build something new?

So, Valyrian Steel is most likely made via some combination of all or some of the following: dragon fire, magic, iron, carbon, maybe blood. As the characters on Game of Thrones are learning, secrets don't stay kept forever, and this one may be the next to out.

This article was originally published on April 18, 2019