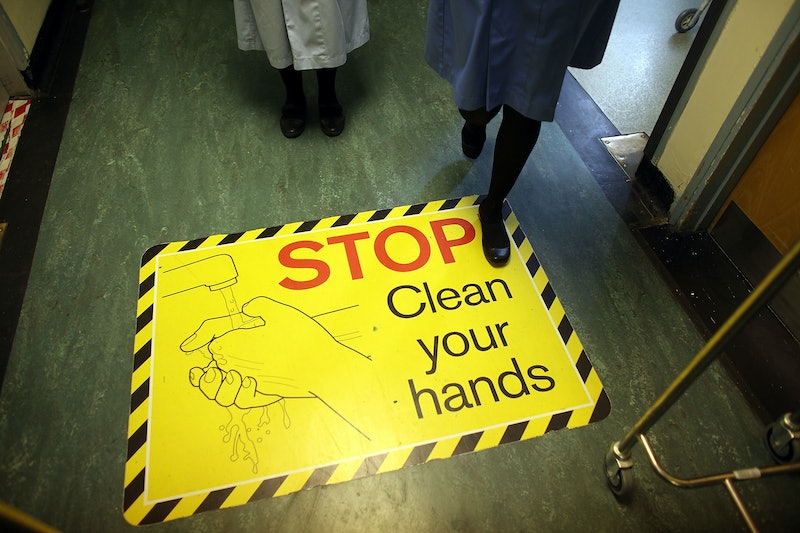 With Newsweek reporting that hundreds of people recently fell ill on a cruise ship, the importance of proper hand washing is once again making headlines. You might be unaware that you've probably been washing your hands wrong your entire life, according to a new article in the Scientific American. Don't believe me? CBS News reported that 95 percent of people are washing their hands incorrectly. And, not washing your hands the right way can have pretty gross unintended consequences — not always not for the person skimping on proper hand-washing hygiene.

Last year I got violently ill after eating a BLT at a restaurant in California — unfortunately, I came down with norovirus. If you've been lucky enough to avoid this devil virus, here's what it entails. Imagine the worst hangover of your life coupled with the worst case of stomach flu you've ever had. My bout with norovirus lasted several days, and it was totally miserable. I was so sick that I could only get out of bed to walk my dog, and I had to carry a plastic plastic bag with me in case I threw up.

Grossed out yet? There's more. Microbiology biology doctoral candidate Michelle Sconce Massaquoi wrote an essay for the Conversation, reprinted in the Scientific American, that revealed some disturbing statistics about hand washing. "I was shocked to read a study that indicated that 93.2 percent of 2,800 survey respondents did not wash their hands after coughing or sneezing," Massaquoi wrote. "Also, a recent study showed that across a college-town environment with observations of 3,749 people, the average hand-washing time was approximately six seconds!"

If you're traveling during the 2017 holidays, making sure you don't get sick is pretty much a full time job that likely involves a saline nasal spray, alcohol wipes to clean your hands and phone, and hand sanitizer. However, not everyone is as fastidious as you. And, these are likely the same people sneezing into their hands instead of their arms before touching a doorknob — or your food. Seriously, the danger is everywhere.

While you might be tempted to quickly run your digits under water and dry them on your jeans, the Centers for Disease Control and Prevention has specific guidelines for proper hand washing.

The CDC noted that "clean hands save lives." Seriously, Live Science reported that before humans grasped the importance of proper hand washing, one doctor admitted doing an autopsy immediately before he delivered a baby. He did not change is clothes nor did he wash his hands, and the mother died as a result.

What's more, Upworthy reported that hand washing to prevent the spread of germs and disease didn't even enter our consciousness until the late 1800s. And even then, the watershed discovery of the correlation of dirty hands and the spread of disease was dismissed as being an absurd reason for the alarming number of women dying from infection after childbirth for more than 20 years.

Maybe you think you're doing a good job washing your hands, but a quick swipe under the faucet doesn't kill all of the germs and bacteria that are having a party on your palms. "Some bacterial cells on our hands may have genes that enable them to be resistant to a given antibacterial agent," Massaquoi explained in her essay. "This means that after the antibacterial agent kills some bacteria, the resistant strains remaining on the hands can flourish."

And, when that happens, sickness can ensue, like the horror show reported by passengers on a recent cruise ship. Passenger Victoria Nolan told ABC News affiliate WPLG that passengers were stricken with norovirus, and people trying to seek medical attention were throwing up in the elevators.

Not All Hand Sanitizers Are Created Equal

Nolan said she tried to see the cruise ship's medical staff, but so many people were sick that the wait to see a doctor was more than four-hours long. Don't let this happen to you. In a contained environment like a cruise ship, it's even more important to give your hands a good scrub.

If you want to avoid throwing up in an elevator, take hand washing as seriously as you would wearing your seatbelt. While it might sound dramatic, both things can save your life.