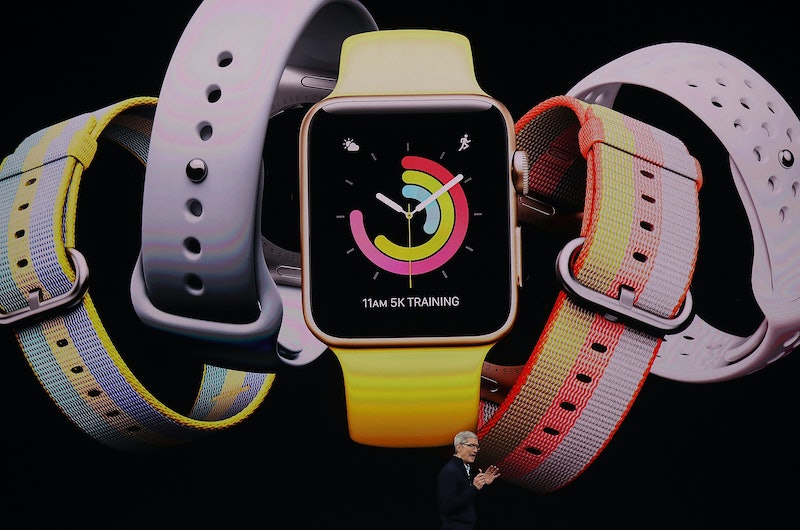 You may know an Apple Watch as a fancy, fashionable gadget — but for some people, it can provide lifesaving functions. Most recently Heather Hendershot, a 25-year-old from Kansas, was diagnosed with hyperthyroidism after her Apple Watch repeatedly alerted her that her resting heart rate was climbing too high. And though it's not likely you've got a hidden disorder as serious as untreated hyperthyroidism for your own Apple Watch to suss out, it turns out there are plenty of things an Apple Watch can tell you about your health.

Just how the Apple Watch can help with your health lies in the data it collects about your body. Mobile health data company Cardiogram has said that the data from an Apple Watch's heart rate sensor, when fed into Cardiogram's learning network DeepHeart, can help detect atrial fibrillation, hypertension, sleep apnea, and also has an 85 percent accuracy when detecting diabetes, according to Macworld.

While there does have to be a middleman like DeepHeart — you can't just strap on an Apple Watch and ask it whether or not you've got diabetes — the fact that the Apple Watch consensually collects information capable of being used to detect serious health problems suggests more will be possible in the future. (Possibly in the near future: MacWorld also reported that Apple is rumored to be working on an Apple Watch feature that will allow you to monitor your glucose levels using the watch, which would be helpful for people with diabetes.)

As for what you can use the Apple Watch to track right now, and see instant results yourself, start with sleep — one of the fastest ways to crash your health, both physical and mental, is by not getting enough quality sleep. The Apple Watch currently doesn't have a built-in sleep tracker, but bear with me for a moment, because of course, coding geniuses from around the world have filled the App Store with third-party apps like AutoSleep or the aptly named Sleep Tracker. Loading these apps onto your Apple Watch can turn it into a handy tracker that will let you see vital sleep statistics like the precise time you fall asleep, how often you're disturbed at night, and if you even slip into deep sleep at all.

The Apple Watch providing an avenue for third-party health apps is actually hugely beneficial to users. While much of the information your basic, built-in Apple Watch health functions can provide you with is generally useful, but not yet very specialized, some healthcare providers have made specific apps to help patients with diagnosed illnesses. For example, Johns Hopkins released the EpiWatch app, which can monitor epilepsy patients, Macworld reported.

Some of the built-in health features of the Apple Watch include the feature that notified Hendershot of her unusually high resting heart rate, which was newly developed for the Apple Watch 3, TechCrunch reported. And of course, there are the workout functions of the Apple Watch, which are perhaps some of its most-developed, pre-loaded health functions. The Apple Watch uses its Activity and Workout apps to track your fitness and motion. "Activity [...] is all about health, movement, wellness and your daily routine," TechAdvisor explains, "and Workout [...] tracks running, cycling and walking."

Apple also recently rolled out the GymKit, which allows you to sync your watch to workout equipment for even more fitness feedback. Looking to the future, there's the possibility Apple may integrate the newly increased functionality of its Health app, where iPhone users can store and view their own medical records, with real-time updates from their healthcare providers.

Together, the Apple Watch's built-in health functions and fitness trackers can be combined with a myriad of third-party apps to turn the device into one wicked health-tracking machine.