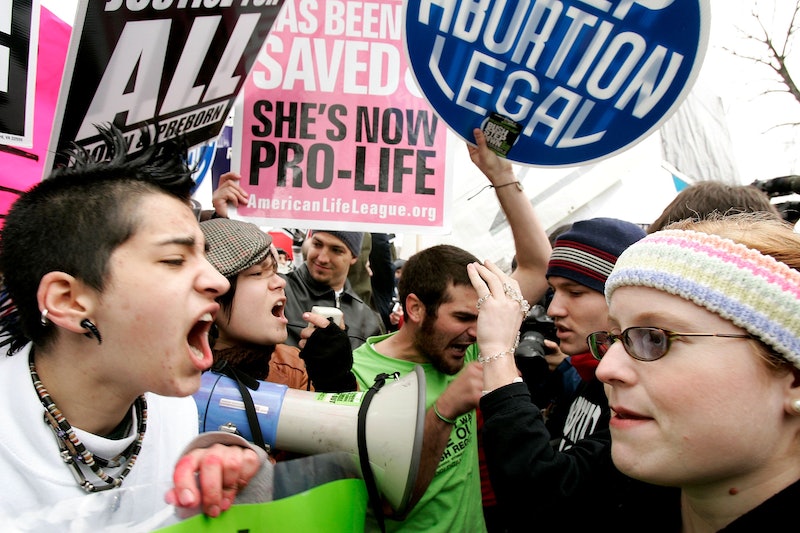 The Unborn Child Protection From Dismemberment Abortion Act is the latest state level attack on women's rights, and it could be one of the scariest yet. The new Arkansas anti-abortion law allows people to sue women and doctors for having or performing abortions, even in cases of rape.

There are three main parts to the new law: injunctions, monetary relief, and procedural restrictions. The first part allows certain people to sue a woman to legally prevent her from seeking an abortion. If the woman is a minor, her parents or legal guardian can sue. If the woman is married, her husband can sue, even if the fetus was conceived through an act of spousal rape. If the woman is a rape victim, her rapist can sue.

The second condition in the new law means that doctors can be sued for civil damages by a man if a woman is just seeking an abortion. Men who are presumed to be the fetus' father are allowed to sue doctors, meaning a man could rape a woman and legitimately get paid for it. What's even more likely is that any abortion providers left in the state will probably be even less willing to perform the procedure at all, since the risk to themselves and their practice has increased drastically as a result of this law.

Finally, the third aspect of the law prohibits all dilation and evacuation (D&E) procedures, essentially banning abortion after 14 weeks, as it's the safest method to end a pregnancy in the second trimester. Performing an abortion using this method is now a felony in Arkansas, punishable by up to a $10,000 fine or six years in prison.

As bad as this is for the people of Arkansas, these restrictions may continue to spread. Donald Trump has said for months that he is interested in overturning Roe v. Wade, and this new law may be his way to do it. Similar laws have been created and subsequently overturned in Louisiana, Alabama, Mississippi, and West Virginia, but as Holly Dickson, legal director for the ALCU of Arkansas, told the Huffington Post, the law could face an intense legal battle.

“They created a whole new right ― the right of a husband or family member to sue a doctor on behalf of an adult patient,” said Dickson. Cases like this, in which new legal precedent is set unilaterally, are typically rife for higher court intervention. And since similar laws have been overturned but still keep popping up, it might be time for the Supreme Court to make a definitive ruling in this area anyway.

The scariest part is that it could take a few years for the case to reach the high court, at which time its demography may have changed. Though Whole Woman's Health v. Hellerstadt was decided with a 5-3 majority that won't be affected if Neil Gorsuch is confirmed as the next justice, there's no way to be certain that the ideological makeup of the court won't have shifted even further right by the time the case would potentially reach the court. If the case does make it to the Supreme Court at the wrong time, it could decimate women's right to access abortion for generations to come.

Dickson already confirmed to the Huffington Post that the ALCU of Arkansas plans to challenge the law, which may stop it in its tracks. If it does make it to the Supreme Court, it could be either reaffirming or disastrous, and there's no way to tell which until it happens. For now, donate to the ACLU of Arkansas and Planned Parenthood Great Plains, because the women of Arkansas don't deserve to be prevented from legitimate medical care or forced to carry a child they never wanted.