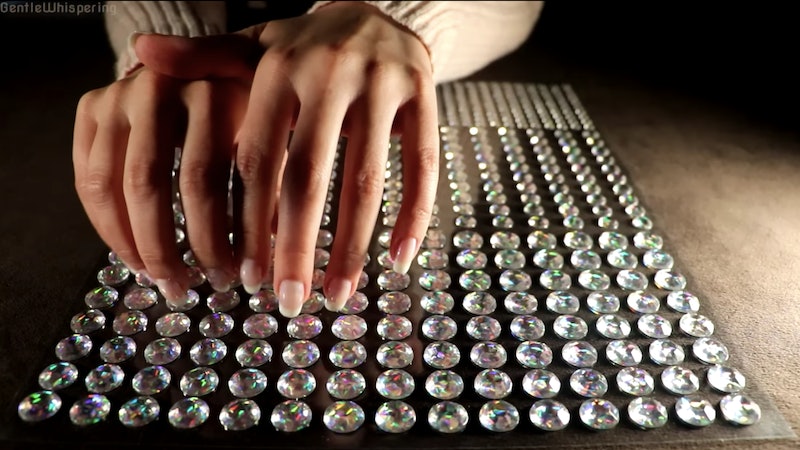 If you've been anywhere near Instagram in the past couple of years, you've likely seen videos tagged "ASMR," aka autonomous sensory meridian response. Similar videos have been popping up on YouTube, and even IKEA got in on the action with its "Where Life Happens" ads. Whether you experience the effects of ASMR or not, you may be wondering exactly how ASMR works in your brain. And it turns out the answer's pretty unexpected.

For the uninitiated, ASMR is sometimes called a "braingasm" because most people who experience it feel a tingling response in their head or neck in response to sensory input — although that famous tingling can also pop up on other areas of the body. People produce videos containing common sensory triggers like the sounds of whispering or of soap shavings being crushed. Though folks seem to know plenty about ASMR triggers, not much is actually known about ASMR itself.

There is little published research available about ASMR, but one peer-reviewed paper out of Swansea University in the U.K. theorizes that ASMR may be linked to synesthesia, a condition where sensory input experienced by one sense is perceived simultaneously by another sense. As Neuroscience for Kids puts it, "Imagine that when you see a city's skyline, you taste blackberries. Or maybe when you hear a violin, you feel a tickle on your left knee. Perhaps you are completely convinced that Wednesdays are light red." In their research, Emma L. Barratt and Nick J. Davis, the authors of the paper, found that 5.9 of their sample population experienced both ASMR and synesthesia.

New evidence about synesthetes, presented in a study published Mar. 5, indicates that synesthesia is "at least partly determined by genes influencing brain development." It's possible ASMR is determined by similar gene activity. But the potential cause doesn't exactly explain what happens inside the brains of people who experience the tingles. And it looks like science may not have concrete answers about how ASMR and brain activity intersect for some time.

In 2015, Nick Higham, a BBC reporter got together with a team of students from Sheffield University's Department of Psychology; the students used monitors to look after Higham's "heart rate, breathing, temperature and skin conductance," and then had him watch ASMR videos. One of the student researchers told Higham that the study, first, was trying to prove that ASMR does exist, and that folks who experience it really are experiencing something tangible. The second part of the students' study involved relaxation. According to research from physiologist Craig Richard at Shenandoah University in Virginia, 60 percent of people say experiencing ASMR makes them feel "sleepy." Because ASMR experiencers frequently describe it as relaxing, the student researchers at Sheffield University were looking for hallmarks of relaxation, "like decreased heart rate and slower breathing rate," Emma Blakey, one of the researchers, told Higham.

If ASMR were proven to cause relaxation, then we would know that ASMR triggers the parasympathetic nervous system, much like meditation. Dr. Berit Brogaard writing for Psychology Today said that activating the parasympathetic nervous system through something like meditation can help shut down the flow of stress chemicals in the body, and can also slow down our brain waves. Of course, ASMR hasn't been proven to cause the same kind of relaxation meditation does, but the possibilities are intriguing.

In Richard's research, he also found that 40 percent of people who experience ASMR had also experienced having their ASMR reactions decrease or disappear. Richard told the New Scientist that that phenomenon should be called "tolerance" — basically, the more you watch ASMR videos and experience it, the more your body and brain potentially develop a tolerance to ASMR. "If they stop watching the videos for one or two weeks, most people say that the ASMR sensations normally return," he told the New Scientist.

ASMR is, to put it frankly, still one big ol' mystery, and further proof that brains and biology are totally wild.

More like this
Why Experts Say Sleeping With A Fan On Isn’t Totally Risk-Free
By Sophie McEvoy
25 Things I've Reduced My Life To, In Addition To WFH In My PJs
By Ginny Hogan
13 Selfie Instagram Caption Ideas That Exude Main Character Energy
By Jessica Booth and Emma Carey
TikTok Is In Its Elle Woods Era
By Meguire Hennes
Get Even More From Bustle — Sign Up For The Newsletter