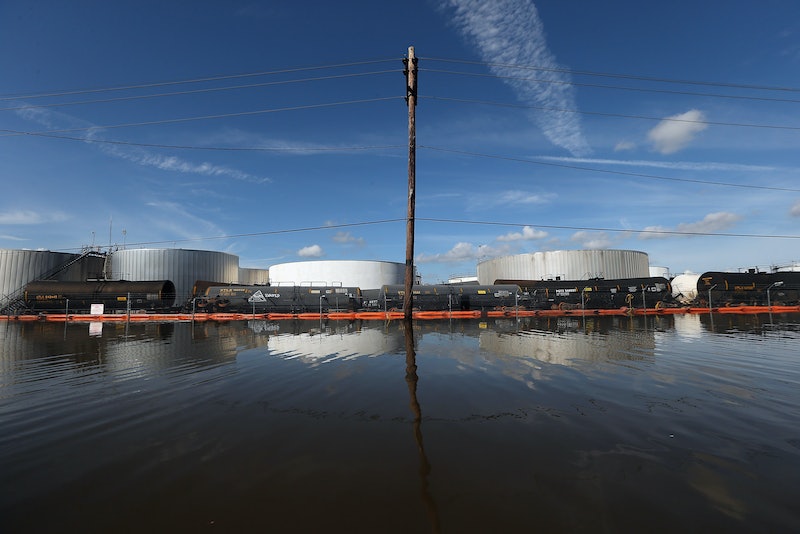 You probably didn't start the week thinking that you'd be wondering about how flooding affects chemical plants, but now that Harvey has left much of the Gulf Coast reeling, it's the new reality. Setting a new record heaviest rainfall in the United States' history, Harvey has caused untold damage to homes and left thousands of people displaced. But the environmental dangers posed by flooded chemical plants are a just as important to consider as the relief efforts continue and as other coastal cities prepare for future disasters.

The chemical plant bringing all of this into focus is the Arkema plant outside of Houston, which on Thursday morning saw two major explosions. Water in the area had reached about 6 feet high, and the plant lost power both from its regular sources and from its backup generators. Without electricity to power its cooling generators, the plant's operators said there was "no way to prevent" an explosion — which has since occurred.

Since the explosions were expected, people were able to prepare for it. The area within a 1.5-mile radius was evacuated, and the BBC reports that the FAA has temporarily banned flights from the air around the plant. This is likely because the fire produced by the explosions will be very intense, burning chemicals that cause serious irritation.

An inability to keep dangerous chemicals cool and the explosions and fires that result from that are currently the most worrisome results of flooded chemical plants, but the situation left by Harvey is offering plenty of other examples of the dangers that they pose. At least 25 chemical plants and oil refineries have shut down because of Harvey, and each one of those plants released a huge amount of pollutants into the air when it closed. Together, the plants have released over 1 million excess pounds of pollutants into the air that people in and around the cities affected are now having to breathe.

This isn't going unnoticed. People have reported negative symptoms and terrible smells in the air, and most have no way of escaping from it. Some of these chemicals can cause significant damage to humans, especially over the long term. And while most people will notice if they're breathing in a dangerous substance, that's not the only way that they might come into contact with them. The flooding could also harm Superfund sites, which store and process contaminated material. If the sites are damaged or the contaminants get into the water, then the region's water sources, including wells, could be damaged for years to come.

In short, when a chemical plant, refinery, or contaminated area is flooded, there's essentially no way to prevent the release of chemicals. Plant workers obviously have to leave at the slightest sign of danger, and they can't be kept open when doing so would put people in danger. However, closing them also releases chemicals into the surroundings, whether it's air, soil, or water.

When it comes to floods and chemical plants, there's basically no winning. The best bet is to do preparation work before danger appears, but floods are powerful enough that sometimes there's simply no way to prevent damage. Harvey's human cost is already high, and it's still rising. The risk that flooded chemical plants and refineries pose may only increase it.