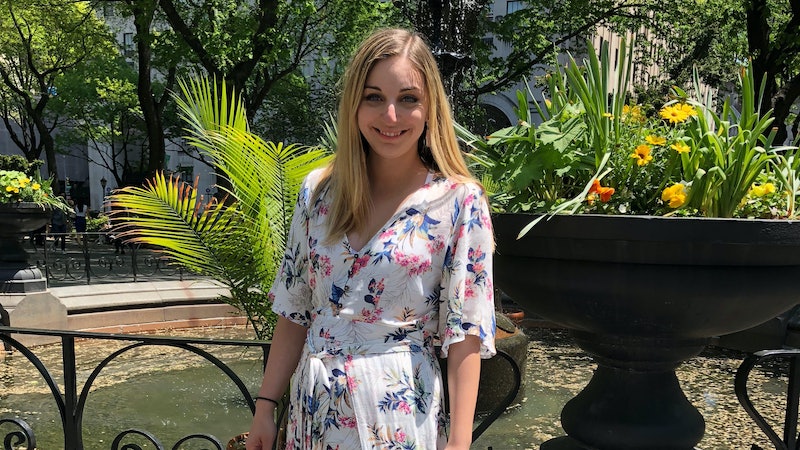 I'm sitting on a couch, legs extended in front of me on a cushion, my head cradled by a pillow. There's no pendulums, or swirling vortexes meant to lull me into an unconscious state I won't remember. Instead, I'm sitting in a very ordinary social worker's office, and I slowly let my eyes drift closed, preparing to be hypnotized. My body feels heavy as I meld into the cushions, and I feel strangely calm, even though I am about to confront my biggest fear.

My therapist recommended I try hypnosis, which work to help patients understand the root of their fear. I have emetophobia, or a fear of vomiting. It manifests differently for different people, but for me it's mostly a fear of seeing other people vomit, or feeling sick myself. Usually when I tell people this, they'll respond by saying, "Well no one likes vomit," which is very true, but still undercuts what differentiates a phobia from wanting to avoid something unpleasant — even thinking about my phobia makes me petrified that I will be in a situation where I have to face it.

"Phobias are essentially intense fears of a specific object or situation for which there is no rational reason the level of fear should exist," Dr. Josh Klapow, a clinical psychologist and co-host of Klapow and Kurre Show, tells Bustle. "A fear of high places is natural, normal, and adaptive. A phobia of high places would include altering your life so that you never went up in a multistory building, never got on a ladder, etc."

Though I've learned how to manage my phobia more as time goes on, avoidant behavior is still my go-to when it comes to coping with my phobia, and it's exhausting. I avoid taking late night trains, out of fear a drunken stranger might get sick. I hate flying because I panic at the thought of sitting next to someone with motion sickness. I get tense in crowded spaces, or around children, because I never know what might happen. And the thought of ever having children still seems extremely farfetched to me because of my phobia.

Despite my success with therapy to help my generalized anxiety disorder, I'd never tried exposure therapy for my phobia. According to the American Psychological Association, exposure therapy consists of helping someone confront their fears by gently exposing them to what causes them anxiety, in a controlled environment. The idea is that with time, the thing or situation being feared will become normalized.

The end goal of exposure therapy is breaking the cycle of trigger and fear, Dr. Klapow says. "We do this by gradually getting closer and closer to the feared stimulus while controlling our anxiety response ... we are systematically getting used to the feared stimulus without getting anxious in a controlled manner." Dr. Klapow recommends that any type of exposure therapy be done with the help of a professional.

What appealed to me about hypnotherapy, which can be similar to exposure therapy, was the idea that I could confront my fears in a controlled environment, access them on an unconscious level, and then help me to unlearn my automatic panic response. If I could discover where the fear resided in my mind, and displace my response with a sense of acceptance, I could better deal with my phobia.

Anyway, back to that couch. I visited Kent Jarratt, a Licensed Clinical Social Worker and former Director of Hypnotherapy Services at the National Institute for the Psychotherapies at his NYC office in the Flatiron District for my first session. Jarratt explained to me that my phobia was a habitual response to a situation I've unconsciously designated as fearful — hypnosis could therefore help me find the root of it, and with his guided suggestions, help reconstruct my habits.

Jarratt also debunked a few myths regarding hypnotherapy before the process began. The first is that you are never under the power of the hypnotist, and retain your full faculties as well as your autonomy when you slip into "trance." The second was that anyone has the ability to be hypnotized, and a hypnotist can adjust their methods to make sure they get there.

As we moved into the hypnotism portion of my session, Jarratt had me enter what he called the "fear chair," a regular fold-up chair he brought into his office specifically for this part of the session, and then promptly left outside of the room once we were finished. In the "fear chair," I was told to sit for a few minutes, slow my breathing, and enter a meditative state Then, for 45 seconds, I was told to imagine the worst case scenario that would trigger my phobia in the worst way. With my eyes tightly shut, I pictured myself on an airplane, seated in the window seat with no room to escape. The person next to me was beginning to feel ill. When I alerted the flight attendant that I needed to be moved, she shrugged her shoulders — the plane was full and they had nowhere to put me. I let myself feel the moment when I knew the person was about to vomit, and pushed it a step further, picturing them vomiting on me. By the time the fear chair was out of the room, I felt nauseous myself.

The next step was to actually start the hypnosis. Sitting comfortably on the couch, Jarratt guided me through a meditation, with the intention of letting the outside world fade away so I could slip into a trance state. I'd meditated before, but falling into a hypnotic trance felt like the deepest meditation I'd ever been able to achieve. I felt like I was on the precipice of sleep, but still fully conscious. I wasn't afraid I would doze off, but it did feel almost like I was lucid dreaming. While I was in my trance, Jarratt tried to access the root of where my phobia came from, specifically targeting my childhood. He offered validation for my fears and painted the picture of a child experiencing a traumatic moment that had stayed with them later in life. Once that reflection was over, he focused on deep breathing, then told me to touch my middle finger to my thumb as a tool to comfort me when I'm feeling anticipatory anxiety. While I was aware of his words, I wasn't actively following what he was saying — instead, I just let it sink in.

While Jarratt finally eased me out of the state, I felt heavy, but extremely relaxed. I left feeling lighter, with a renewed sense of wellbeing that I usually felt post-meditation. Despite the difficulty it took me to get to that couch, I felt like I had done something overwhelmingly positive. For the next few days my experience was top of mind — I reflected on my dreams, seeing if they could give me further clues into my unconscious mind, while trying to repeat what I remembered of Jarratt's words to my conscious mind, in hopes they'd take a deeper root.

It is important to note that research is still inconclusive as to whether or not hypnotherapy works for the treatment of phobias. A 2016 review of clinical studies concluded that there is not currently sufficient evidence to deduce that hypnosis is effective in treating anxiety disorders, and that more research needs to be done. That being said, after my experience with hypnotherapy, I can see how it can help people coping with a phobia. While you may not feel cured, especially after walking away from one visit, hypnotherapy has a way of opening you up to your subconscious mind, which can complement other forms of therapeutic treatment, and even help you shape what the therapy process should look like for you. But like most types of therapy, the efficacy can vary from person to person.

I am certainly not cured of my phobia just yet, but this experience has sparked my interest in my unconscious mind, and what it could be holding in relation to my phobia. Because I can't seem to pinpoint where or when my phobia started, accessing this deeper level of consciousness may be another thread to explore as I process my phobia in therapy.

According to Jarratt, hypnotherapy can help you tap into your unconscious even outside your sessions. "I find that when people get close to their unconscious mind, they're able to reap the benefits of those positive trances," Jarratt says. For example, if you go to sleep with a problem, and let your unconscious mind (or "night shift," as Jarratt calls it) process the thought, you may be able to wake up with a clearer idea of how to solve it. "People start trusting their unconscious processes a lot more when they start using hypnosis and trust that they can get ideas that can solve their problems, particularly a lot of creative things that work," he says.

Whether you call it your unconscious mind, your intuition, your gut feeling, or your "night shift," there is a lot going on behind the surface of our waking thoughts, and after my experience with hypnosis, I'm determined to find out more.